This year for Christmas, my wife and I gave our kids the gift of a nearly week long trip to Walt Disney World in Florida.  Considering the turn the weather took the day after Christmas at home in Indiana, and how nice it turned out to be in Florida, it also ended up being a gift to us as well. 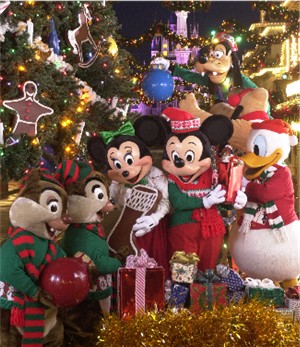 Now, how did I come to write a blog post about Disney World? I surely didn’t intend to do so, but one of the nice things about a vacation that includes waiting in line is, you get some time to think. And for me, this post started when my son, while we were in EPCOT’s Norway, said, “Let’s go into that church.” For those of you who are rusty on your EPCOT Norwegian lay of the land, the pavilion includes a stave church building (which houses an exhibit on the Vikings). My son’s request got me thinking about where God was at Disney World (a topic which very well could, as I thought some more about it, be worthy of a whole article in and of itself). But this is not that article; rather, this is about Disney World at Christmas time, and what American Mainline Christianity (whether of the old or new variety) might learn from the House of Mouse.

Before anyone assumes this is going to be some new angle on the whole “church as business model,” let me lay those hopes/fears aside for you. It is not. While I think there are some valid arguments one could make along those lines, this post is different. You see, one of the main reasons my wife and I had decided to do this trip was that we wanted to see what Disney did for Christmas. We knew we wouldn’t make the journey at Christmas, but after discovering that the parks stayed decorated into the New Year, the deal was sealed.

What Disney does to their parks at Christmas is pretty special: the lights, the displays, the merchandise! One could visit Disney World at Christmas and see nothing but commercialization and consumerism and even secularization run amok. Indeed, a trip here at Christmastime might fire some members of American Mainline Christianity into bemoaning what the Magic Kingdom has done to our culture, including Christian culture, for all of those reasons. Before you know it, we’d see calls for boycotts, petitions asking Disney to support “traditional values,” and maybe even op-eds about Disney’s self-portrayal of being “family friendly,” while making money off of movie divisions that “glorify violence” or some such. If that seems far fetched, it shouldn’t—all of those things have happened in the last 10 to 15 years (usually from some corner of the Religious Right, or from evangelical circles, and all with precious little to show for it).

But before that happens here, let me ask you, dear reader, to step back—either from launching such a drive or from shaking your head at those who would—and join me for a second at Disney’s Hollywood Studios. Click on that highlighted hyperlink and behold the Osborne Family Spectacle of Dancing Lights. You’ll be beholding for awhile, as there are some 5 million lights involved. And let me tell you what I saw, and heard, just the other night, when I beheld them for the first time: the very spirit of Christmas.

We were directed by the park staff (“cast members,” in Disney-speak) down and around the byways of park’s streets to begin in front of a Nativity light display. We’d seen it earlier in the day of course, and I’d thought it odd that it seemed tucked away near the back of the (then unlit) display area. But now I understood why. You start there, away from the bulk of the display, so that those lights stand out more. They draw you in. Soon enough, you are pulled away (if only by the strength of the crowd) to other displays. Some are religious in nature (the wise men, angels, peace on earth); some are not. But even when you aren’t focused visually on the Nativity, you are never far from it, thanks to the music that is playing—the sounds of the season, some secular, some holy, but all Christmas.

And that trip through the lights got me thinking. I have heard Christmas music virtually everyday since late November. At Disney World, it was playing still. “Light” seemed to be the buzzword this year at the Advent and Christmas services I either attended or watched. Here were 5 million lights in just one section of one Disney park. The people I had attended services with—friends, family, neighbors—had all likely heard those messages before. Here at Disney World, I was hearing (and singing) some of the same hymns, “seeing” the same message, with thousands of people I didn’t know, literally from every corner of the globe (and not just the EPCOT globe—we saw groups from various Central and South American nations, and encountered visitors from across Europe, as well as from Asia and Australia, amongst other places). Can any American denomination, inside or outside of the Mainline, say their message (while no doubt more deeply seeded with theology and doctrine) was heard by so many? Did any have such an “evangelizing moment” to reach out to those outside of the Christian faith and tradition (those whom many American evangelicals would have once called “the lost,” or “unreached”) with the Good News of Christ’s birth?

Now, I’m not saying that Disney World was attempting to spread the Christmas message of the Church in an evangelizing way. If it gets cold and snowy enough in Indiana later this winter, you might even get me to say (as my favorite of Snow White’s dwarfs, Grumpy, might do) that even if they were, it wouldn’t make up for all the commercialization and secular message that came with it. But that doesn’t mean that there isn’t a lesson to be had in all of this about the Mainline of American Christianity either. If a secular corporation can do this (or this), what more can (and should) the Church be doing? As one of my favorite sermons from this past Advent season pointed out, Christmas started with Christianity and the Church—and Christians should not be afraid to say so!  Perhaps scholars need to look a bit more deeply into issues of culture (something that gets a few pages in the Mainline book, but no doubt needs more attention).  Maybe there is more for the church planners (as well as those who study such movements) to learn about/from the whole “corporation model” of Church growth.

With less than a year until the start of the next Advent and Christmas season, there is still time to think about such things before they are upon us again.  And there is also time to reflect that sometimes such epiphanies can come to us at the most unexpected times and places—not unlike that very first Christmas itself.

A version of this article originally appeared on the author’s blog—read it here.

Jason S. Lantzer is Adjunct Professor of History at Indiana University Purdue University and at Butler University. He is the author of Mainline Christianity: The Past and Future of America’s Majority Faith.