The Wall Street Journal just posted a glowing review of Boulevard of Dreams: Heady Times, Heartbreak, and Hope along the Grand Concourse in the Bronx 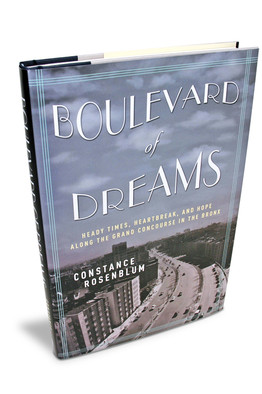 It was a mecca of sorts, decidedly middle-class, a pristine boulevard sitting on its very own hill in the West Bronx, and once considered the borough’s classiest address. The Grand Concourse will be 100 years old come November, and in those years it has gone through a roller-coaster ride of stunning growth and decline, and growth again, as it seems to have risen out of its own ruins. Constance Rosenblum, a New York Times editor, has charted this ride with clarity and panache in “Boulevard of Dreams,” a history of the Concourse.

Originally known as the Grand Boulevard and ­Concourse, the project was, in a sense, doomed from the start. Late 19th-century engineers and planners in New York had imagined it, Ms. Rosenblum says, as an “integral rib” of a new “Oz-like metropolis” called the Bronx. These planners were looking for nothing less than “a northern extension of Fifth Avenue”—or, as one official at the time said, “a vigorous rival” to Manhattan itself. But the boulevard that opened in 1909, after years of ­skulduggery and delays, was a remote road on a ridge, with few ties to Manhattan or Fifth ­Avenue. Still, the Grand Concourse was quite beautiful to behold, and a neighborhood grew up around the road until it transformed itself into a prosperous little island of Jews, the Bronx’s “golden ghetto.”

…Ms. Rosenblum has written with real thunder about the Grand Concourse and the wild dreamers who once lived there. “Boulevard of Dreams” is a passionate and deeply elegiac book.