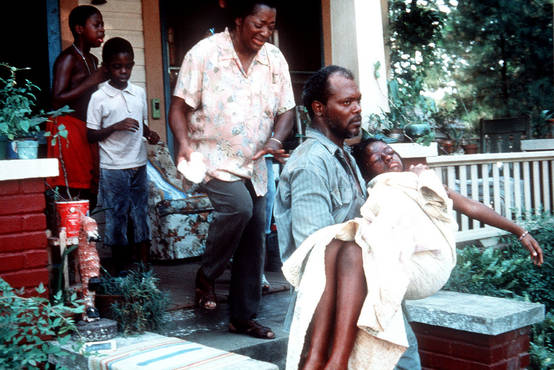 I want to tell you a story. I’m going to ask you all to close your eyes while I tell you the story. . . This is a story about a little girl walking home from the grocery store one sunny afternoon. . . Can you see her? Her raped, beaten, broken body soaked in their urine, soaked in their semen, soaked in her blood, left to die. Can you see her? I want you to picture that little girl. Now imagine she’s white.

The above quote reflects powerful imagery employed by defense attorney Jake Brigance in A Time to Kill (1996)—the words spoken in his summation before an all-white, southern jury during the criminal trial of a black father who was being prosecuted for killing the white men who raped, hung, and left his young daughter for dead.

The use of racial imagery like this is nothing new in American culture. Take politics, for example: racial imagery has frequently been used to sway public opinion and win elections. In 1990, when Jesse Helms, a white United States Senator from North Carolina, faced Harvey Gantt, a black challenger, race played a role in Helms’ campaign. Specifically, in an effort to allege that Gantt supported racial quotas that would benefit blacks, Helms ran an advertisement that showed the hands of a white person crumbling an employment rejection letter. “You needed that job,” the announcer said, “and you were the best qualified. But they had to give it to a minority because of a racial quota. Is that really fair?” The ad was broadcast a few days before the election, and arguably boosted Helms to victory. This should be of no surprise; social scientists have demonstrated for years that emotion is highly predictive of voters’ judgment and decision-making. Let’s have a little thought experiment that contemplates the extent to which racial imagery might effectuate a change in constituent attitudes in other political spheres today.

Ever since the United States Supreme Court’s Roe v. Wade decision, which expanded women’s access to abortion, Republicans have sought to reverse those gains. More recently, Republican politicians, including Richard Mourdock (state of Indiana Treasurer), have asserted that life is a gift from God, and abortions should only be allowed when the mother’s life is at risk.

As a justification for the all-out ban on abortion, Todd Akin (former U.S. Representative for Missouri) has touted that in cases of “legitimate rape,” pregnancy is rare because a woman’s body is able to prevent an unwanted pregnancy. Some Republicans, such as Joe Walsh (former U.S. Representative for Illinois), believe that there should not even be an exception for cases where the mother’s life may be at risk because, according to Walsh, “’with modern technology and science, you can’t find one instance’ in which a woman would actually die.”

The challenge for such politicians, and those who subscribe to their mode of thinking, is to not to imagine some amorphous victim. Rather, they should, in the words of Jake Brigance, “[n]ow imagine she’s white” and her rapist is black. Would they then feel the same way about abortion in instances of rape? I believe they would not, given the history of race, anti-miscegenation attitudes, and political ideology in America.

In the early 1900s, the mandatory separation of blacks and whites in social settings, referred to as Jim Crow, applied to all aspects of life in the South, including public schools and marriage statutes. The idea of “white womanhood” was a major part of white supremacy and was an essential part of the Jim Crow system in the South. White womanhood was premised on a belief that a “lady” must be white. While it was feared that interracial marriages would lead to the creation of “a mongrel breed of citizens” that would destroy white identity and threaten white supremacy, this was a fear only evident in cases involving white women who married non-white men. White women who brought race-based annulment cases against their husbands were protected from both colored men, as well any accusation from the woman’s husband that attacked her whiteness. When white men had children with black women, it was simply seen as a remnant of the practices observed during slavery.

In most states, the fear of a mongrel race as a result of interracial marriage was only a concern when it involved blacks. However, in Virginia, it was illegal for whites to marry anyone other than another white person. Southerners were alarmed by the increasing number of light skinned blacks, as it blurred the line between black and white and threatened both with supremacy and racial purity. Laws prohibiting miscegenation continued until 1967 when they were declared unconstitutional in the case of Loving v. Virginia. In Loving, the Virginia Supreme Court had relied primarily upon its earlier holding in Naim v. Naim. That case held that the policy behind Virginia’s anti-miscegenation statute was to prevent interracial procreation and the creation of a “mongrel breed of citizens.”

Racial segregation of public schools was a tool for reinforcing both white supremacy, as well as in preserving the purity of the white race, because of the vital, socialization role that schools play. Because public schools have the effect of shaping the beliefs and perspectives of young impressionable children, they were seen as “key social institutions for inculcating racial consciousness in whites and blacks.” By preventing socialization among black and white children, segregation of public schools was able to address the issue of the development of romantic feelings among people of different races, and consequently, the chances that interracial marriage would occur was decreased. In fact, the United States Supreme Court’s Brown v. Board of Education ruling, which declared segregation of public schools unconstitutional, led to fears that the socializing of black and white children would lead to interracial marriages, and thus, miscegenation. As a result, the ruling in Brown strengthened the fight against interracial marriage.

In the case of rape, the rape of black women was not even recognized in some states as a criminal offense. However, the rape of a white woman by a black man resulted in sentences for rape that were five times that given for convictions of other rapes and sometimes led to a sentence of death. Even the idea of a black man soliciting a white prostitute was viewed as objectionable.

This anxiety surrounding white women being the victim of black men’s libidinal pangs, concupiscent urges, and exertion of power and violence has not only been a historical and cultural-legal fact, it is contemporary and political. In 1991, a Michigan probate judge, discussing the Michigan law under which minors seeking abortions may request a waiver of the parental consent requirement, stated that he was hesitant to grant waivers but would consider doing so “in some cases, such as incest or when a white girl is raped by a black man.” In 2006, a white Maine couple allegedly kidnapped their pregnant nineteen year-old daughter to take her out of the state to have an abortion, because the father of her child was black.

And while many politicians have viewed abortion as breaking up the American family, President Richard Nixon thought that in the case of a pregnancy involving a black man and a white woman,  abortion was a necessary procedure. This is not surprising, given empirical research demonstrating that whites’ political orientation predicts their own romantic partner preferences. White conservatives, more so than white liberals, are less likely to desire black romantic partners and more so prefer white romantic partners. This preference, and its implications, may not even be conscious; researchers have found that political conservativism is predictive of automatic favoring high status over low status groups as well as whites over blacks.

With all this said, the recent tweet from an anonymous writer on MSNBC’s official Twitter account suggesting that conservatives hate interracial marriages may have been more accurate than inflammatory. (“Maybe the rightwing will hate it, but everyone else will go awww: the adorable new #Cheerios ad w/ biracial family,” the tweet read.) It is this anxiety, or hostility, by some on the political Right against black male/white female interracial love, sex, marriage, and in the worst of scenarios, rape, that should help inform their judgments about abortion.

Gregory S. Parks is Assistant Professor of Law, Wake Forest University School of Law. He is co-author (with Matthew W. Hughey) of The Wrongs of the Right: Language, Race, and the Republican Party in the Age of Obama (NYU Press, 2014).

2 thoughts on “Abortion: Race, rape, and the Right”