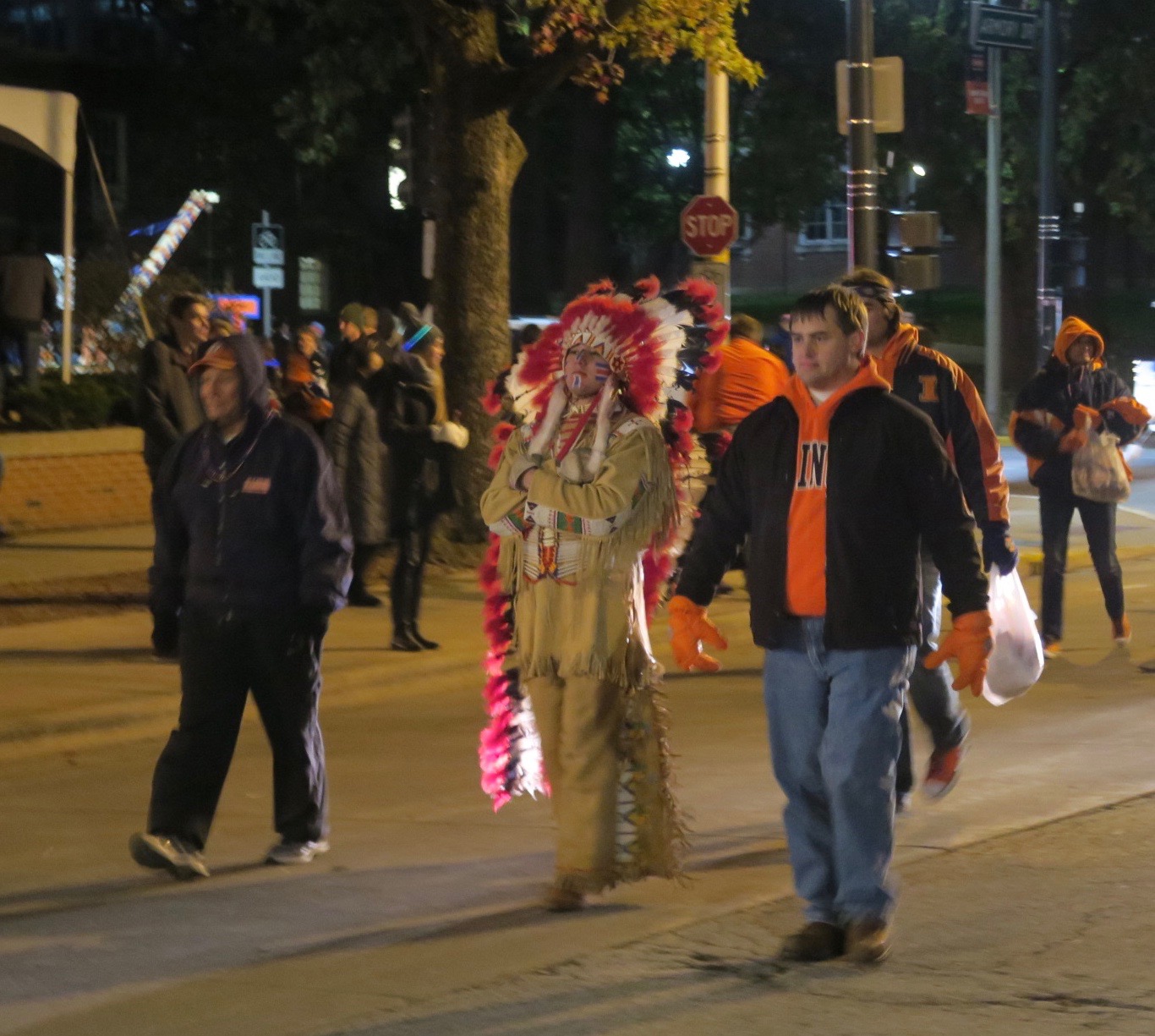 In the 1970s American Indian activists spoke out against both Chief Illiniwek of the University of Illinois at Urbana-Champaign and Chief Wahoo, the mascot of the Cleveland Indians. Nearly fifty years later, Chief Illiniwek is retired and Chief Wahoo is on his way out. Retiring these two mascots necessitated decades of activism on the part of Native people and their allies because imaginary Indians are so deeply ingrained in our cultural landscape. At the Smithsonian Museum of the American Indian, an important new exhibition, “Americans,” ponders the prevalence of Indian images in our culture and asks, “How can Indians be so present and so absent in American life?”

My own town, Champaign-Urbana, Illinois, has wrestled with this contradiction for two decades – and still can’t put it to rest. Eleven years ago, under pressure from the NCAA, the University of Illinois at Urbana-Champaign finally retired Chief Illiniwek, a student dressed as a fictional Plains Indian who danced at the halftime of basketball, football and volleyball games.The battle over him had been so vociferous and he was so present, so ubiquitous, that Native people often felt absent — invisible and unheard in our community. When they made their presence known and spoke up against the mascot, they were often met with hostility.

Eleven years later, a small group of bring-back-the-chief retro-activists refuse to move on. They promote their own unofficial mascot at university events and on social media. Buckskinned, beaded, and be-feathered, the unofficial mascot will be at the game when the men’s basketball team plays Purdue on February 22 on the eleven-year anniversary of the retirement. His backers are encouraging his fans to wear T-shirts with the chief logo and slogans of the bring-him-back campaign.

These are tough times for public education and the University of Illinois has fared worse than most – a state budget crisis and drastically reduced state funding, free speech battles, leadership turnover, fears about the loss of tuition waivers and a pending graduate employee strike. As if that’s not bad enough, UIUC has a polarizing ex-symbol that refuses to go quietly, a reincarnated ghost of a stereotype with season tickets. And thousands of alumni who do not want to hear that the ritual they love is outdated and racist.

If you want a textbook case of how not to handle a racial issue on a campus in the twentieth and twenty-first centuries, study Illinois. The university leadership lacked the gumption to stand up to pressure from state officials and local boosters and equivocated for nearly two decades while the controversy festered and the community, campus, and alumni split into two hostile camps.When it finally retired the chief performance in 2007, the university administration should have taken the high ground with some inspiring rhetoric about the mission of public education and created one of those touching marketing campaigns depicting students as heroes vanquishing racism. It should have commemorated the tradition with a museum exhibit that placed all things Indian-themed firmly behind glass. But university leadership did nothing and stayed mum.

The university failed to inform students that Native Americans ask them not to buy or wear clothing with Indian-related imagery. The university never held an event to trade in T-shirts with the old logo for new ones without it. So students keep wearing Indian imagery and vendors keep printing the stuff. And university leaders have been afraid to broach the subject of a celebratory and unifying new mascot, something many students want.

For a decade Chief Illiniwek’s fans nursed their resentment and the two sides remained polarized. Eleven years later, a hardline group like Turning Point USA can manipulate this unresolved racial conflict to its advantage. Turning Point is a right-wing organization which claims it promotes small government and free market capitalism on college campuses. But Turning Point has a history of provoking and harassing left-leaning professors and student groups and inviting white supremacist speakers. And according to the Southern Poverty Law Center, TPUSA has close ties with the alt-right and white nationalists. In the South, the alt-right has used the controversy over Confederate monuments as a springboard. The nostalgia for American Indian-based pageantry can serve the same dangerous purpose.

When the unofficial mascot marched in the homecoming parade, a multi-racial coalition of student protesters blocked the parade route. Student government leaders are demanding the removal of Indian imagery from campus buildings and opening discussion about a new mascot. The presence of this re-energized student activism is one reason for optimism. But students need to hear from campus leaders. They must articulate why retiring the Indian-themed identity was right and important, and then they must empower students to create a new mascot they can rally around. If they don’t speak up, the alt-right will.

Carol Spindel is an activist and the author of Dancing at Halftime: Sports and the Controversy Over American Indian Mascots (NYU Press, 2002). She drafted the United States Commission on Civil Rights resolution urging non-Native schools to retire Indian-based names, logos, and performances. She also serves as president of the Champaign County ACLU.