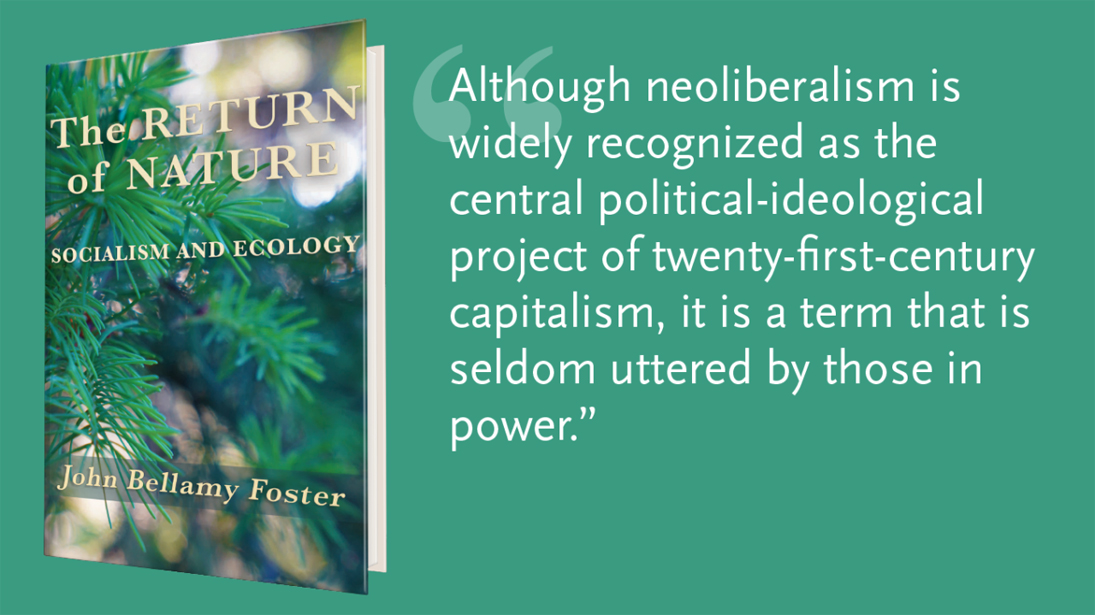 NYU Press is the proud distributor of books from Monthly Review Press. Explore an excerpt from an article, orignially published in Monthly Review magazine, by John Bellamy Foster, author of The Return of Nature: Socialism and Ecology. Visit Monthly Review to read the full article.

The French poet Charles Baudelaire wrote in 1864 that “the cleverest ruse of the Devil is to persuade you he does not exist!”1 I will argue here that this is directly applicable to today’s neoliberals, whose devil’s ruse is to pretend they do not exist. Although neoliberalism is widely recognized as the central political-ideological project of twenty-first-century capitalism, it is a term that is seldom uttered by those in power. In 2005, the New York Times went so far as to make neoliberalism’s nonexistence official by running an article entitled “Neoliberalism? It Doesn’t Exist.”2

Behind this particular devil’s ruse lies a deeply disturbing, even hellish, reality. Neoliberalism can be defined as an integrated ruling-class political-ideological project, associated with the rise of monopoly-finance capital, the principal strategic aim of which is to embed the state in capitalist market relations. Hence, the state’s traditional role in safeguarding social reproduction—if largely on capitalist-class terms—is now reduced solely to one of promoting capitalist reproduction. The goal is nothing less than the creation of an absolute capitalism. All of this serves to heighten the extreme human and ecological destructiveness that characterizes our time.

The Origins of Neoliberalism

The notion of neoliberalism is nearly a century old, although its main political influence is much more recent. It first arose as an ideology in the early 1920s in the face of the collapse of liberalism nearly everywhere in Europe, and in response to the rise of German and Austrian social democracy, particularly developments in Red Vienna.3 It had its first notable appearance in Austrian economist and sociologist Ludwig von Mises’s three works: Nation, State, and Economy (1919), Socialism (1922), and Liberalism (1927).4 Mises’s ideas were immediately recognized as representing a sharp departure from classical liberalism, leading the prominent Austro-Marxist Max Adler to coin the term neoliberalism in 1921. Mises’s Socialism was subjected to a sharp critique by another gifted Austro-Marxist, Helene Bauer, in 1923 and to a more extended critique entitled “Neoliberalism” by the German Marxist Alfred Meusel, writing for Rudolf Hilferding’s Die Gesellschaft in 1924.5

For Meusel and Bauer, the neoliberal doctrine presented by Mises was far removed from classical liberalism and constituted a new doctrine devised for the era of “mobile capital” or finance capital, of which Mises was a “faithful servant.”6 It was expressly aimed at justifying the concentration of capital, the subordination of the state to the market, and an openly capitalist system of social control. Mises’s neoliberalism, Meusel wrote, was characterized by the “merciless radicalism with which he attempts to derive the totality of social manifestations from a single principle” of competition. Everything opposed to the complete ascendance of the competitive principle was characterized by Mises as “destructionism,” which he equated with socialism. For Mises, Charles Dickens, William Morris, George Bernard Shaw, H. G. Wells, Émile Zola, Anatole France, and Leo Tolstoy were all “without perhaps being aware of it…recruiting agents for Socialism…paving the way for destructionism,” while actual Marxists were nothing more than destructionists, pure and simple.7

In Liberalism, Mises explicitly distinguished between “the older liberalism and neoliberalism” on the basis of the former’s commitment, at some level, to equality, as opposed to the complete rejection of equality (other than equality of opportunity) by the latter.8 The question of democracy was resolved by Mises in favor of “a consumers’ democracy.” Where democracy is concerned, he wrote, “free competition does all that is needed.… The lord of production is the consumer.”9

Mises was to exert an enormous influence on his younger follower Friedrich von Hayek, who was originally drawn to Mises’s Socialism and who attended Mises’s private seminars in Vienna. They shared a hatred of the Austro-Marxists’ Red Vienna of the 1920s. In the early 1930s, Hayek left Vienna for the London School of Economics at the invitation of Lionel Robbins, an early British neoliberal economist. Mises took on the role of economic consultant to the Austrofascist Chancellor/dictator Engelbert Dollfuss prior to the Nazi takeover. In his work Liberalism, Mises declared: “It cannot be denied that Fascism and similar movements [on the right] aiming at the establishment of dictatorships are full of the best intentions and that their intervention has, for the moment, saved European civilization. The merit that Fascism has thereby won for itself will live on eternally in history.”10 He later emigrated to Switzerland and then to the United States with the support of the Rockefeller Foundation, taking up a teaching post at New York University.

This article is based on a keynote address, entitled “Absolute Capitalism: The Neoliberal Project and the Marxian-Polanyian-Foucaultian Critique—Where Do We Go from Here?,” presented to the 2nd Biennial Conference of the Caucus for a New Political Science, February 25, 2019, South Padre Island, Texas. 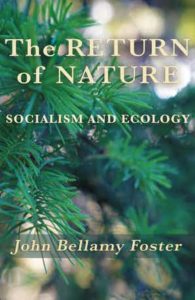 John Bellamy Foster is editor of Monthly Review and a professor of sociology at the University of Oregon. His most recent book is The Return of Nature: Socialism and Ecology, published by Monthly Review Press.