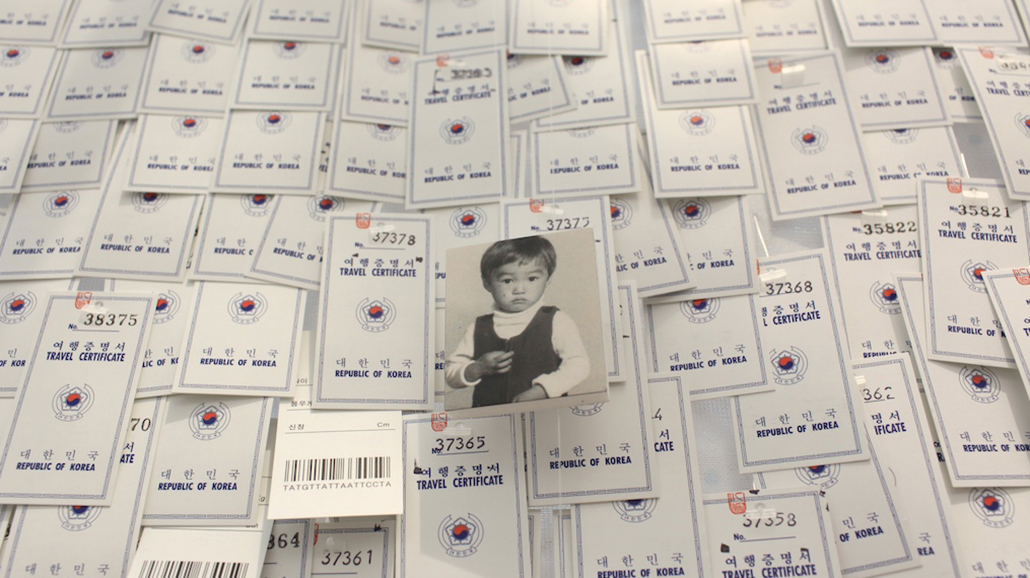 [This piece originally appeared on The Fulbright Korea Infusion.]

South Korea plays a central role in the history of international and transracial adoption. Beginning in the mid-1950s, the phenomenon has spanned six decades and involved over 200,000 Korean children adopted by families in Western nations.  Given its long duration, Korean adoptees comprise multiple generations.  They are older as well as younger adults.  They have founded organizations in the diaspora to provide resources specifically for adoptees.  And they have paved the way for what has become a more common experience of returning to Korea to tour the motherland, to attempt to reunite with birth families, and to live on a long-term basis.

In a January 2015 New York Times Magazine article entitled “Why a Generation of Adoptees Is Returning to South Korea,” writer Maggie Jones highlights Laura Klunder’s visit to Seoul in the summer of 2010 when she was 26 years old. Klunder joined more than 500 other Korean adoptees from around the world for an annual event known as the Gathering.  At this event, Klunder heard fellow adoptee Kim Stoker give a lecture about “belonging” in South Korea.  Jones writes:

Raised in Colorado and Virginia, Stoker has lived in South Korea for 15 years and has the maternal presence of someone who has held the hands of many 20-something adoptees during their first months in Seoul. Living there is the most meaningful thing she has done in her life, she says. “We didn’t have a choice about what happened to us,” she told me, referring to adoptees being taken from their country. “So to come back, to live on your own terms. . . .” she said. “I do really feel like these are my kin.” By the end of Stoker’s talk, Klunder felt, as she put it, “invited to come back.” And before leaving South Korea that week, she decided that she would return to live there. 1

In the twenty-first century, the impact of several hundred returning Korean adoptees on their homeland is profound.  Klunder’s individual journey is part of a collective experience inspired and forged by other Korean adult adoptees who have returned to Korea seeking belonging in their country of origin.  Korean adoptee leadership and participation in organizations such as G.O.A.’L (Global Overseas Adoptees’ Link) and spaces like the guesthouse KoRoot enable and facilitate this experience. 2

What happens when the adopted Korean diaspora returns to the homeland beyond a temporary visit?  How does this phenomenon change the sending nation?  Among the hundreds of adoptees who have returned are writers and visual artists.  What might artistic production by and about Korean international adoptees who have returned to live in Korea say about the history and contemporary state of international adoption?  These are some of the preliminary questions that undergird what I hope will be a chapter of a new book project tentatively titled “No Longer Silent: Asian International Adoption and Cultural Production.”

“No Longer Silent” is inspired by the presence of Korean adoptees in my Asian American Studies classes in the United States and Korea, and the research I conducted for my book Global Families: A History of Asian International Adoption in America that was published by NYU Press in 2013 3.  In Global Families, I argue that we must pay attention to the voices and experiences of Asian adoptees in order to understand the complexity of international adoption.  Yet, unlike social workers and adoptive parents, adoptees’ voices and perspectives are noticeably absent in most archives about international adoption.

As several generations of Korean adoptees in Western nations have come of age, cultural expression comprises one productive site for the documentation and dissemination of their experiences.  Since the 1990s, the emergence of a sizable body of artistic work by and about Asian adoptees has challenged the representation of Asian international adoption as a “quiet migration.” 4  Global Families’ final chapter, “To Make Their Own Stories Historical,” features close readings of the documentary films, First Person Plural and In The Matter of Cha Jung Hee, written and directed by filmmaker and Korean adoptee Deann Borshay Liem.

I chose to focus on Deann Borshay Liem’s films in the book for a very specific reason.  My archival methodology primarily mined the records of the non-governmental organization, the International Social Service-United States of America (ISS-USA) Branch, a pioneering social service organization that facilitated international adoptions, but advocated for a different approach to the handling of these adoptions in contrast to the more well-known work of Oregon farmer and adoption advocate Harry Holt.  Because the ISS-USA arranged Borshay Liem’s adoption, and because her films analyze the prominent role that organizational records played in her life history as a Korean adoptee in the United States, First Person Plural and In the Matter of Cha Jung Hee offer a direct and provocative link between ISS-USA organizational records and one of its adoptees speaking back as an adult.  Such links are difficult to find as adoption case records typically do not provide longer, continuous accounts of the adoption after placement.

However, Deann Borshay Liem’s films are only a few examples of adoptee cultural production.  While they document a history of Korean international adoption, they do not represent the diversity and dynamics of adoptee experience.  My hope is that “No Longer Silent” will illuminate a larger, multivocal conversation about adoption through close readings of artistic work by and about adoptees, and oral interviews with other filmmakers, visual artists, performance artists, and writers.

An illuminating example of such artistic expression is Jane Jeong Trenka’s 2009 memoir Fugitive Visions 5.  Fugitive Visions defies simple categorization.  It is at once a personal memoir upon her sixth return visit to Korea; a poetic ethnography of the collective experiences of returning adoptees who chose to live in Korea on a long-term basis; and a call for recognition of the racism and physical and psychological violence experienced by Korean adoptees in Korea as well as abroad.

In Fugitive Visions, Jeong Trenka bears witness to returning Korean adoptees’ unique homesickness, one that stems from being unintentional immigrants in the land of their birth.  She documents how the loneliness experienced by returning Korean adoptees at times results in self-inflicted violence and addiction.  Her own alienation emerges from the perceived abnormality of being an overseas adopted Korean in Korea: “In a country where ‘American’ is used synonymously with ‘white,’ my inability to speak fluent Korean combined with my inability to be white is a deformity.  I am a sort of monster, a mix of the familiar with the terribly unexpected like a fish with a human face or a chicken that barks.” 6

Jeong Trenka writes of being an impossible subject in the land of her birth: “My elder Korean brother, my aunts and uncles, and my elder sister are disappointed that I’m not learning [Korean language] more quickly.  I try to tell my sister that I’m losing my motivation to study because of my everyday interactions with Korean people—all the questions, the constant chore of explaining why I exist.  I feel like a unicorn: a fantasy creature . . .” 7

The title Fugitive Visions has an important dual meaning, however.  It refers to the returning Korean adoptee fleeing racism and isolation abroad.  But it also refers to Jeong Trenka’s passion for music, and specifically her training as a pianist.  As an adult, she studied Prokofiev’sVisions Fugitives, an exercise that she claims broke, but then rebuilt her.  Thus the reader is not left with the conclusion that the returning Korean adoptee is solely a tragic figure.  Rather Jeong Trenka declares that “despite all these abandonments, all these tiny annihilations — I want to live.” 8

Another significant work is photojournalist Jeanne Modderman’s 2013 photo essay entitled “Faces of Adoption.” It features the multiple historical actors involved in adoption and the diverse range of adoptee experiences—both mundane and dramatic—as they visit Korea for a first or second time, or after a birth family search that spanned seven years.  Modderman writes:

There is a large community of Korean adoptees from all over living in South Korea. As one who lived there for over a year, I can attest that it’s a time filled with complex feelings and emotions, often a struggle to decide how you fit in, but also a security in being with people like you. Working on this project opened my eyes to the many faces of adoption and allowed me to see it from new points of view. From the birth mothers, to the foster mothers, to the adoptive parents and, of course, the adoptees, there are so many stories out there waiting to be told. . . . I am grateful knowing there is still much to document. Adoption in Korea is ever evolving. 9

I take Modderman’s point of the “many stories out there waiting to be told” to heart.  During my Fulbright year in Korea, I met with Korean adoptee artists, scholars, and activists in a variety of formal as well as informal settings.  And I was struck by the diverse range of their viewpoints about the relationship between their artistic work and their identities as adoptees.  Some claimed an adoptee identity and featured it prominently in their work.  Others identified with the adoptee community, but preferred to disentangle their art from their adoptive identity.  I believe that acknowledging these differences and divergences is important.  Thus, my current research aims to document and analyze these evolving dynamics of adoption through the artistic work of adult adoptees.  In doing so, I hope to further our understanding of migration, family formation, and belonging in the twenty-first century.

Catherine Ceniza Choy is Professor of Ethnic Studies at the University of California, Berkeley and a 2015-16 Fulbright Distinguished Lecturer at Yonsei University.  She is the author of Global Families: A History of Asian International Adoption in America (NYU Press, 2013) and Empire of Care: Nursing and Migration in Filipino American History (Duke University Press, 2003).  This essay is a condensed version of an invited presentation she delivered at the 2015 Situations International Conference: Ethnic Minorities and Diasporas in the Asian States at Yonsei University.