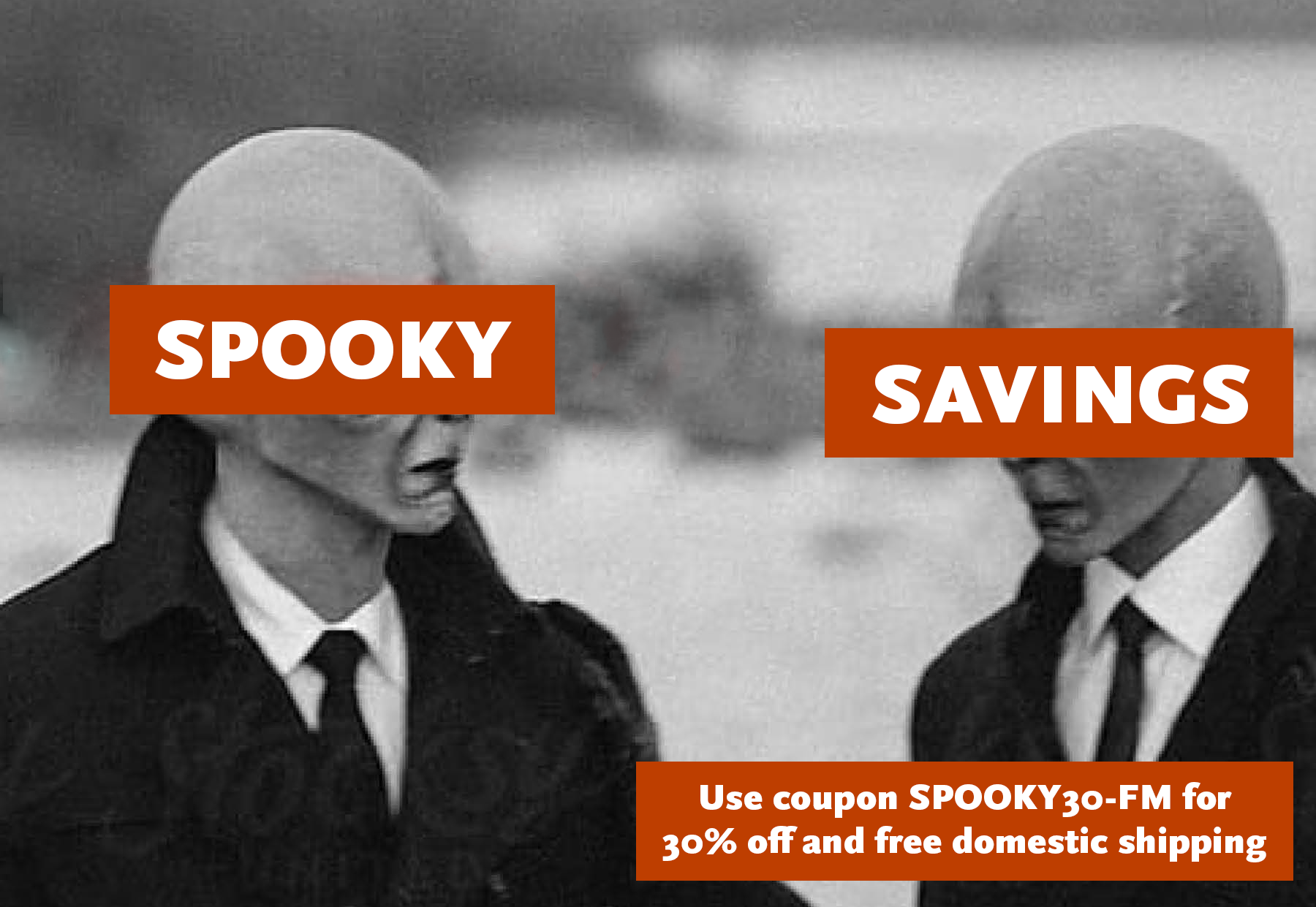 Scouring the tombs (and tomes) of our library, we’ve cobbled together a list of scary books that are sure to ensnare you this spooky season! Use coupon SPOOKY30-FM for 30% off your order and free domestic shipping when you purchase one or more of these creepy books… 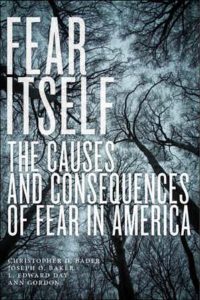 The Causes and Consequences of Fear in America

What’s more frightening the the fear of fear itself? From moral panics about immigration and gun control to anxiety about terrorism and natural disasters, Americans live in a culture of fear.Drawing on five years of data from the Chapman Survey of American Fears—which canvasses a random, national sample of adults about a broad range of fears—Fear Itself offers new insights into what people are afraid of and how fear affects their lives.
While fear is typically discussed in emotional or poetic terms—as the opposite of courage, or as an obstacle to be overcome—it nevertheless has very real consequences in everyday life. Fear Itself is a novel, wide-ranging study of the social consequences of fear, ultimately suggesting that there is good reason to be afraid of fear itself. The persistence of fear is palpable in our society, now perhaps more than ever. It would seem that no one is safe from fear itself… Available March 2020, save when you preorder today! 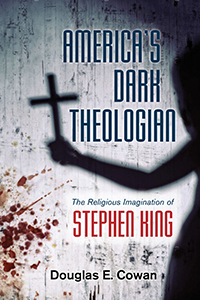 One simply cannot ignore the king of horror during Halloween season. If you want screams and redrum and smirking children and cats eating you from the inside among other “darlings,” one only needs to turn to Stephen King. Something rather unexplored in King’s books is the link to religion in his texts from Carrie, to The Dead Zone, to Misery, to The Shining. Douglas E. Cowan presents the first in-depth investigation into how King treats religion in his horror fiction. Cowan showcases through keen analysis of King’s anything-but-dicey (but also very dicey at times, considering all fun and no play) dossier that horror stories, with their focus on questions of violence and mortality, speak urgently to the primal fears embedded in such existential mysteries. 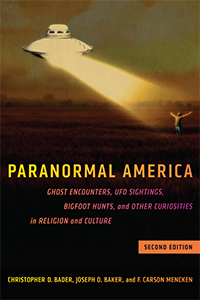 Ghost Encounters, UFO Sightings, Bigfoot Hunts, and Other Curiosities in Religion and Culture

Given the popularity of television shows such as Finding Bigfoot, Ghost Hunters, Supernatural, and American Horror Story, there seems to be an insatiable public hunger for mystical happenings. But who believes in the paranormal? Based on extensive research and their own unique personal experiences, Christopher Bader, Joseph Baker and Carson Mencken reveal that a significant number of Americans hold these beliefs, and that for better or worse, we undoubtedly live in a paranormal America. The second edition includes new and updated research based on findings from the Baylor Religion survey regarding America’s relationship with the paranormal. Drawing on these diverse and compelling sources of data, the book examines topics such as the popularity of paranormal beliefs in the United States, the ways in which these beliefs relate to each other, whether paranormal beliefs will give rise to a new religion, and how believers in the paranormal differ from “average” Americans.

“[A] landmark in the evolution of modern culture, documenting the significant increase of public interest and richness of popular culture about possibilities that exist just outside the boundaries of science and religion…”—William Sims Bainbridge, author of eGods: Faith Versus Fantasy in Computer Gaming and Across the Secular Abyss 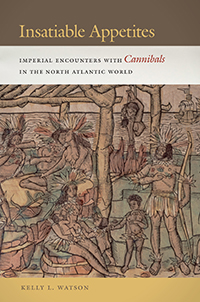 Did you hear about the cannibal who arrived late to the dinner party? They gave him the cold shoulder… baddaching! Terrible jokes aside, but really how can we not joke, because for as long as we can remember, cannibalism was the ultimate evil, the inhumane, the savage shadows lurking in the woods. In fact, “cannibalism” for medieval and early modern Europeans was synonymous with “savagery.” In this definitive analysis, Kelly L. Watson argues that the persistent rumors of cannibalism surrounding Native Americans served a specific and practical purpose for European settlers. Watson focuses on how gender, race, and imperial power intersect within the figure of the cannibal. Watson reads cannibalism as a part of a dominant European binary in which civilization is rendered as male and savagery is seen as female, and she argues that as Europeans came to dominate the New World, they continually rewrote the cannibal narrative to allow for a story in which the savage, effeminate, cannibalistic natives were overwhelmed by the force of virile European masculinity. 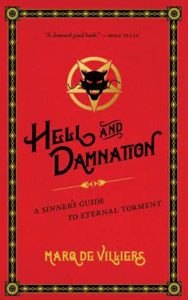 A Sinner’s Guide to Eternal Torment

Anyone else’s fear of hell and damnation take you on a spiraling decent into the depths of an unknown crevice of horror and fear and torture? Are your visions of The Bad place—where giant fire-spitting squid demons in human suits encourage infighting and cattiness and giant shrimp abound? Or are you visions more animated and lively, where you are forced to placate the Robot Devil with some good ol’ fashioned swashbuckling?
Bestselling author Marq de Villiers takes readers on a journey into the strange richness of the human imaginings of hell, deep into time and across many faiths, back into early Egypt and the 5,000-year-old Mesopotamian epic of Gilgamesh. This urbane, funny, and deeply researched guide ventures well beyond the Nine Circles of Dante’s Hell and the many medieval Christian visions into the hellish descriptions in Islam, Buddhism, Jewish legend, Japanese traditions, and more.

“A comprehensive guide to all things Hades.”—Foreword Reviews

“De Villiers. ..is a well-informed and agreeable guide, whose hellish reportage will satisfy even the most curious.”—Booklist 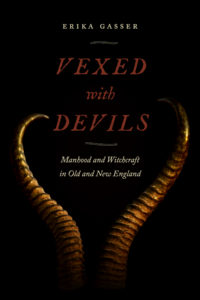 Take a walk with young Goodman Brown through the Salem witch trials in this cultural history of witchcraft-possession focused on the role of men and patriarchal power in both England and colonial New England. Between the 16th to 18th centuries, an estimated 30,000-60,000 people were executed during witch trials, over 75% of them women. Both England and colonial New England faced cases that blurred the line between witchcraft and demonic possession, most famously, the Salem witch trials. Revealing that witchcraft trials had as much to do with who had power in the community as they did with religious belief, Vexed with Devils changes the way we think about witchcraft. Paperback available December 2019, save when you preorder today!

“Anyone seeking a fresh perspective on, and deeper understanding of, [demonic and witchcraft] possession accounts will not be disappointed.”—Publishers Weekly 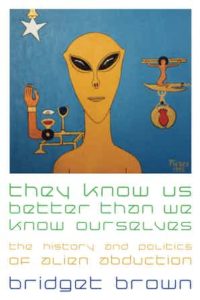 For all you X-Files fans, They Know Us Better Than We Know Ourselves hosts a slew of interviews with alleged alien abductees from the New York area. Whether you believe in aliens or not, alleged alien abductees believe passionately in their own accounts, and they should be taken seriously for what they tell us about our changing understanding of ourselves and our place in the world. Bridget Brown suggests a new way to think about alien abduction—as a phenomenon rooted in the social, cultural, and political history of the United States in the late twentieth century. Accounts of alien abduction express a pervasive sense of anxiety about and disenfranchisement from the projects of national technical, scientific, and social progress in America since the 1960s, as people increasingly have felt unable to know what is real or true about themselves and the world. What we can’t figure out is what’s scarier—the alien abductions or the politics…

“Brown’s brilliant study is so much more than a book about alien abduction—it is a flesh-and-blood inquiry into the nature of belief in a technologically advanced society.”—Andrew Ross, author of Fast Boat to China 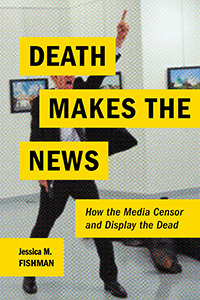 Death Makes the News is the story of this controversial news practice: picturing the dead. Jessica Fishman uncovers the surprising editorial and political forces that structure how the news and media cover death. The patterns are striking, overturning long-held assumptions about which deaths are newsworthy and raising fundamental questions about the role that news images play in our society. Fishman observes editors and photojournalists as they deliberate over which images of death make the cut, and why. Death Makes the News combines media censorship and death—two of the scariest things in our world to reveal that much of what we think we know about the news is wrong.

“Stellar findings. This book is sure to be important for years to come.”—Howard S. Becker, Author of Outsiders: Studies in the Sociology of Deviance. 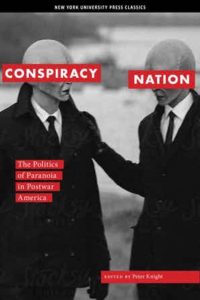 The Politics of Paranoia in Postwar America

So many podcasts tell us that aliens are real. And who are we to question the validity of a podcast?! Pssht. But, seriously, why are Americans today so fascinated by Area 51?

Or for that matter, how did rumors emerge about the origins of the AIDS virus as a weapon of biowarfare? Why does the Kennedy assassination provoke heated debate over fifty years after the fact, and why did Donald Trump’s birther theories only serve to increase his popularity with voters?

“A rich and diverse collection.”—Journal of American Studies 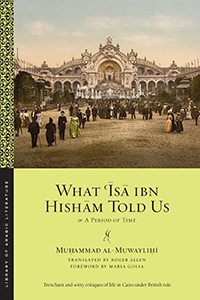 What ‘Isa ibn Hisham Told Us

Or, A Period of Time

Do you take contemplative walks through graveyards? If you answered yes…OK weirdo, you’re in good company with What ‘Isa ibn Hisham Told Us. Bridging classical genres and modern Arabic fiction, What ‘Isa ibn Hisham Told Us is divided into two parts. Sarcastic in tone and critical in outlook, the first part of the book relates the excursions of its narrator, ‘Isa ibn Hisham, and his ghostly companion, the Pasha, through a rapidly westernizing Cairo and provides vivid commentary on a society negotiating—however imperfectly—the clash between traditional norms and imported cultural values. The second half takes the narrator to Paris to visit the Exposition Universelle of 1900, where al-Muwaylihi casts a critical eye on European society, modernity, and the role of Western imperialism as it ripples across the globe. Paving the way for the modern Arabic novel, What ‘Isa ibn Hisham Told Us is invaluable both for its insight into colonial Egypt and its pioneering role in Arabic literary history.

“[Allen’s] craftsmanship is on full display in these magisterial translations… of supreme literary complexity.”—Journal of Arabic Literature 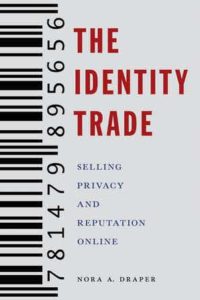 By Nora A. Draper

Is anyone else’s greatest fear in the onlinescape being catfished, or is it just us? Online is a scary place to be: how do you know who you’re chatting with is real or robotic, how can you be sure that online clothing store with the wicked jacket isn’t going to steal and ruin your credit? The Identity Trade examines how the consumer privacy industry was built on the tension between the impulse to share and anxieties about losing control of our personal information. Nora A. Draper examines how these companies have defined threats of unwanted exposure online and introduced tools and strategies to empower people to manage their online presence by balancing obscurity with visibility, tensions that are not simply theoretical but also impact personal and physical safety in very real ways. And with that chilling reality, all we can do is find solace in looking at gifs of Dwight Schrute (“Identify theft is not a joke, Jim!”).

“Featuring interviews with such industry figures as Fred Davis, founder of the identity management company Lumeria, and Josh Galper, general counsel for the online data vault provider Personal, the book brings to light the cultural and economic ramifications of the publics desire for online privacy. . . . Throughout, Draper examines the rights, expectations, and economics of digital privacy with expert fascination.”—Publishers Weekly

Use coupon SPOOKY30-FM for 30% off your order and free domestic shipping when you purchase one or more of these creepy books at nyupress.org.