Peter Coviello’s new book, Tomorrow’s Parties, launches an innovative (and often
unexpected) exploration of nineteenth-century American sexuality through the lens of literature. Here, we talk with him about Joseph Smith, the Velvet Underground, and how he came about his cover image. 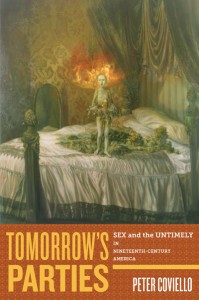 NYU Press: Tell us a bit about your book.

So I’m interested – when I’m reading Henry James or Harriet Jacobs or Joseph Smith – in
what a modern notion of sexuality might prevent us from seeing clearly, might mute or distort. In this way I think of the book as in dialogue not only with scholarship about sex in the American nineteenth century but with new queer work that worries over the adequacy of “sexuality” itself as a cherished bit of conceptual terminology. It’s my sense that a lot of us doing queer work today are wondering afresh at the misapprehending, sometimes colonizing tendencies of “sexuality” even in its queerest registers; so Tomorrow’s Parties tries to tell a story about how the emergence of that sexuality came to happen, and at what cost.

NYUP: Why the title, Tomorrow’s Parties? Are you a Velvet Underground
fan?

PC: I am. So there’s that. I also found a curious commonality across a lot
of the writers I was reading: a tendency to transform their own uneasiness with the
cramped, narrowing conceptual languages of erotic life that were available to them
into this ardent, yearning investment in futurity, and what might be possible there.
Again and again I encountered authors who, when gripped by one or another kind
of sensual intensity or bodily captivation, would begin dreaming of the future, of
some as yet unripened set of conditions under which those pleasures might find for
themselves a different kind of legibility, and perhaps even a way of living them out
in concert with a range of other people. The more I thought about that – and I do a
lot of my thinking surrounded by music – the more the phrase “tomorrow’s parties”
became inevitable.

NYUP: How did you find such a captivating image for the cover?

PC: This would’ve been in Brooklyn, I’m guessing, in the early 2000s. I was being led around a mazy gallery and feeling, I confess, a little out of my depth. Then I turned a corner and found myself abruptly transported.

Julie Heffernan’s paintings are strange without being surreal, classical but not imitative, painterly without being ironic. You look at them and feel unnerved, as though you’re seeing not a deft citation of classical style but that style as appraised
at a somehow estranging distance. There’s an eerie kind of rupture being staged in Self-Portrait in the Bedroom by the central figure – painted in outblown nonrealist extravagance – but of what? And by what? Of the antique Tintoretto-esque framing gestures by a present, or a future, that confounds it? Of an inherited order by all that fractures it: bodiliness, imagination, their pairing in sex?

Peter Coviello is Professor of English at Bowdoin College, where he specializes in nineteenth-century American literature and queer studies, and where he has served as Chair of the departments of English, Africana Studies, and Gay and Lesbian Studies. His book, Tomorrow’s Parties: Sex and the Untimely in Ninteenth-Century America is out now from NYU Press.