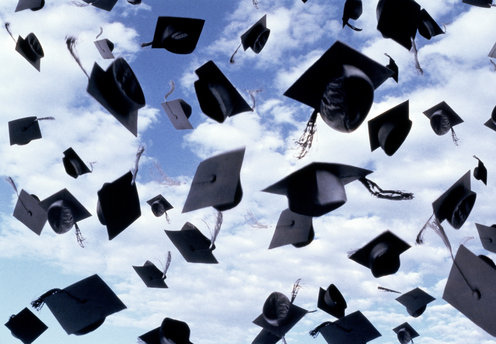 Commencement ceremonies are taking place at colleges throughout the country this month, and few students realize that they’ve all graduated with an extra elective: Constitutional Law. In his new book, The Constitution Goes to College, Rodney Smolla argues that all of the central questions about our system of laws have been debated in the context of higher education. From a review at The Cutting Edge News:

Smolla, currently president of Furman University and formerly dean of the law schools at Washington and Lee University and the University of Richmond, begins by asserting that “there is scarcely any constitutional question that arises in the United States that does not devolve, sooner or later, into a campus question.” Surveying the contested terrain of the contemporary campus, from academic freedom (for faculty, students, and institutions), to affirmative action, to the rights of religious groups on campus, and more, it is hard to disagree. All such issues, according to Smolla, involve at least one of “five fundamental tensions” that have influenced American higher education: “(1) the debate over whether we have a ‘living Constitution’; (2) the division between the public and private spheres; (3) the distinction between ‘rights’ and ‘privileges’; (4) the notion of ‘ordered liberty’; and (5) competing conceptions of equality.” Campus religious groups that seek to exclude nonbelievers, for instance, place religious and associational rights in conflict; affirmative action raises questions of “process equality” versus “outcome equality.”

Smolla goes into more detail in an interview at the Inside Higher Ed:

A: Certainly as a “regulated industry,” those of us in higher education are more tuned in to the day-to-day changes in administrative or legislative regulation that immediately impact our operations. From a broader perspective, however, I argue that much of the identity of modern American universities, both public and private, has been shaped directly or indirectly by constitutional principles. Notions such as academic freedom, due process, privacy, and equality are examples. Even the structures of our universities have been influenced by constitutional norms. Universities are a fascinating blend of corporations and democratic republics. Our conceptions of shared governance resemble constitutional principles such as separation of powers. And of course, many of the “culture war” battles of the last three decades have been fought on constitutional terrain, and those contests course through our campuses.

You can also take a look at some of our other best-selling titles on higher education, including Cary Nelson’s No Univeristy Is an Island (Now in paperback, and recently featured in The Nation) and Marc Bousquet’s How the University Works.