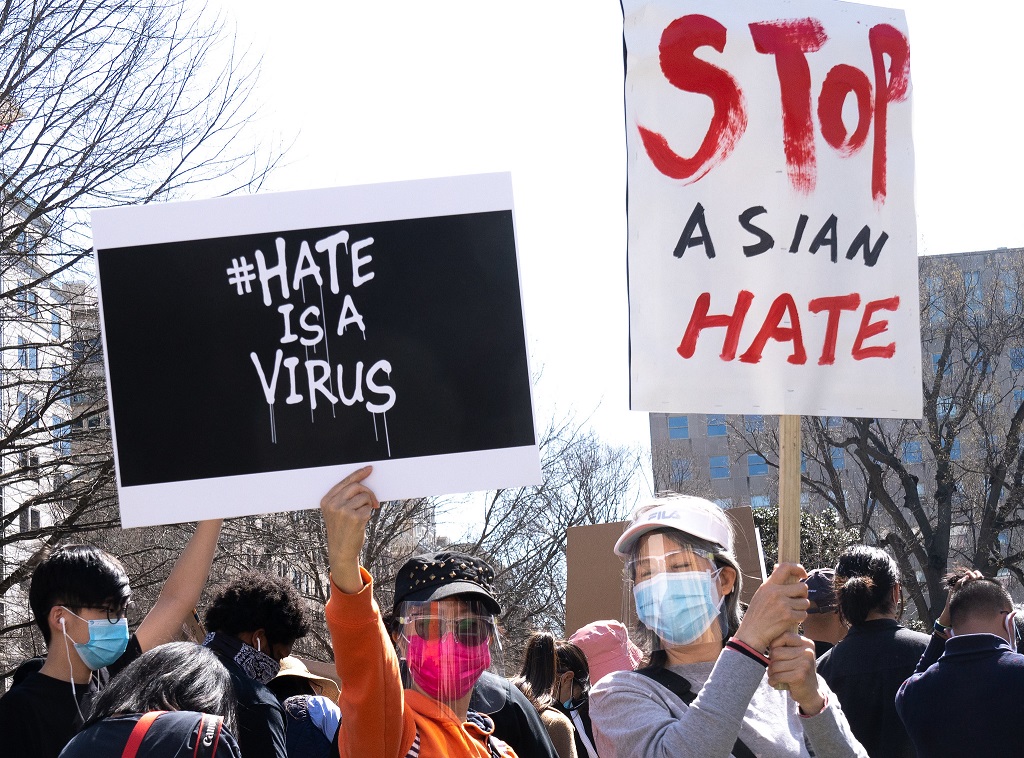 Lunan Ji is my son by marriage to my daughter Sarah.  He knows the facial structures and the sounds that differentiate Vietnamese from Chinese that I do not. But I have been learning.  And I hold onto my body and feel the assault as I see Asian women attacked and told to go back from where they came.

The women who were killed are named:

I have carried the 6 Asian women who were shot dead where they worked with me since their horrific murders. They were hard working mothers, immigrants, low wage workers. They moved here for jobs—the kind of jobs that keep everything flowing, low-wage working class jobs. The kind that require you to work many many hours, and often need 2 or 3 of them to earn enough to support your family. Arthur Tam in the Washington Post describes these women as “hard working women matriarchs and providers”; they represent “immigrant grit”.  Instead they were assumed to be, and denigrated as sex workers. One of these victims hardly saw her sons because she was always working, for them. This was her American Dream—to improve her children’s opportunities.

The American Dream is not dreamlike for those who are struggling within it.  Opportunities are unequal and punishing. These women were loved deeply by their children who respected how hard they worked to make a life for them. They worked at the Golden Spa and Young’s Asian Massage but did not advertise it because of the stigma.

After reading last night about the Filipino woman walking down a Manhattan street who was struck and punched and stomped on the head while others watched and did nothing I sat down to write. (The details of the perpetrator are irrelevant) Inaction is more brutal than the act. Avoidance and silence should not be allowed.

This is a historical moment to take note. There is little new to Asian racism in the US and yet Covid has given it a new license, a new virulence, a new exposure.  As well, much of the criticism of Chinese authoritarianism, well deserved, in terms of its anti-democratic stance towards Hong Kong, and its genocidal treatment of Ughyurs, fuels anti-China rhetoric. But do not collapse critique of China with Asian racism.

It is the unacceptable and irrational Covid-related newness that we must register and mobilize against. I will call some of my Asian friends today and ask if they want me to walk with them wherever they might have to go.

Asian—is already a problematic generalized term of ignorance. Which Asian am I speaking of: Filipino, Chinese, Vietnamese, Korean, Japanese?

The Association of Southeast Asian Nations (ASEAN) is a regional grouping that promotes economic, political, and security cooperation among its ten members: Brunei, Cambodia, Indonesia, Laos, Malaysia, Myanmar, the Philippines, Singapore, Thailand and Vietnam. (Take note that women in these countries have been and are some of the fiercest fighters for freedom: in Vietnam, Iran, Myanmar, and so on.)

Asian racism needs no knowledge of these specificities.  In this moment it is the physicality of the face, the eyes, the nose, the hair, the body, the walk that defines a person as Asian.  The specifics are ignored because that is what racism does. Hatred does not need clarity or knowledge. I wrote in my book HATREDS that women’s bodies are overdetermined with racist misogynist meanings, they are always a site of political struggle to define the nation, and who is a part of it. Nationalism is always written with the phantasms of hatred on women’s bodies.

Because I am a white anti-racist feminist writer and activist I am compelled to envision a radicalized inclusive vision of racisms that recognizes Asian women’s specificity. One that pushes out from and with the recognition of victims of chattel slavery to accountings of colonialism and imperialism. Only white supremacists could wonder if this slaughter was racist or a hate crime. It was even more. It is a crime of racist-capitalist-misogyny.

My use of the term women is inclusive of trans, gender-variant, queer, disabled, nonbinary identities.  I wish to embrace the specificity and differences that clarify that we share the punishing system of racist misogyny, but differently.  We are similar but not the same.  United but not one.

Racism is structural and systemic and personal and individual. Until it is abolished there can be no meaningful freedom. People must be changed, and whether they want to or not. This newest iteration demands a recognition and naming and seeing of Anti-Asian hatred and violence.

If systems of oppression are always negotiating and renegotiating their privilege just maybe these horrific set of murders of Asian women alongside the thousands of anti-Asian racist acts, allows white anti-racist feminists to rethink and really see how sex, race and gender are always refining their relationship to each other. Maybe this moment of violence against Asian women clarifies the harm to all of us newly. These atrocities should become a new visor for the complexity and universality of women’s exploitation and oppression.

There is a particular depiction/oppression that defines Asian women as a sexual object, hypersexualized, as lotus blossoms and dragon ladies. The history is complex. One cannot understand this particular history and presence of Asian women—especially from Korea and Vietnam without recognizing the militarist/imperialist connection between the US and the sex work industry. Prostitution and sex work is imbricated in warfare and military bases established in war and post-war zones. The hyper-sexualization of Asian women has particular definition in terms of war-rape and the war-economies. And also parades as a kind of religiosity and Christian Puritanism that targets Asian women as temptress.

Constructed ideas about Asian women are usually wrapped at some point to a notion of servicing American servicemen, especially in Philippines, Thailand, Korea and Vietnam. As early as 1875 the Page Act banned importation of Chinese women to the US for prostitution. The fetishization of Asian women as docile and submissive trails this history of this militarization. (This is part of the initial silenced story of the recent killings by the news media needing to tease out sex workers from workers who clean the floors, manage the doors, and prepare food.)

Asian women have been constructed as exotic sex objects—the exoticism is racial and imperial and white supremacist.  It gets formulated in specific class terms—the more privileged the Asian woman, the less exotic given a distancing from explicit sex work. But as all women—white, Black, Asian, LatinX—no female is completely severed from her exploitative objectification.

I am writing to further correct my mind’s eye and white-anti-racist feminism—to recognize Asian women in their complexity at the center for seeing all women, alongside Black and Brown and LatinX, because they have been sidelined and marginalized.

So I am moving forward with a newer theorized recognition of Asian women and the many racial/racist iterations of misogyny. By understanding these specificities I can, as a white anti-racist socialist feminist envision and fight for a more inclusive and richly complex notion of humanity.

Do not be a bystander.

Do not be silent.

Given our masks, when you pass an Asian on the street, speak a welcome to them. And, then, join the Anti-Racist marches in the streets, and stand up for structural revolutionary anti-racist socialist feminism.

One thought on “An Offering to our Asian Sisters”