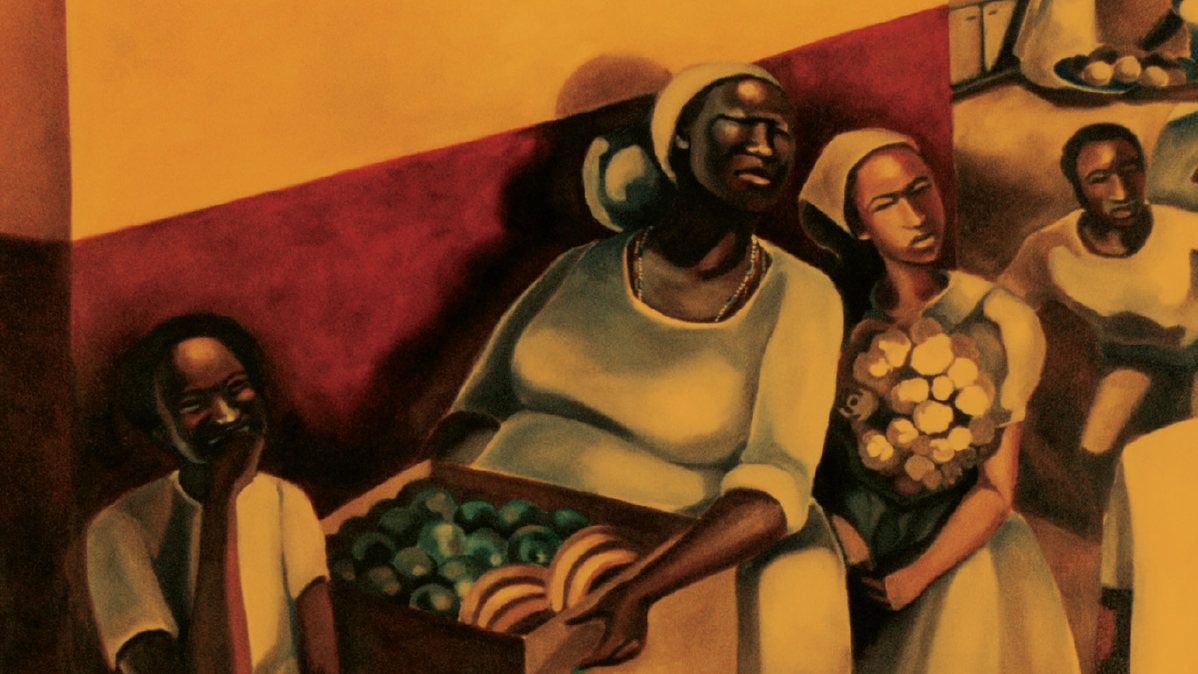 Growing up in a Cuban family, I understood that food was love. My fondest cooking memory is of making tamales with my mother: sprinkling maize flour with tiny mosaic tiles of pork and green pepper; whisking in broth and tomato sauce; spooning the dough into soaked corn husks, then binding them with string. My mother worked as a seamstress, and I more often saw the hands that conjured tamales making magic with needle and thread.

When I began writing Religion in the Kitchen: Cooking, Talking, and the Making of Black Atlantic Traditions, the mothers I had in mind were the elders of the community at its heart. Chief among them were Arlene Stevens, the head of the ritual kitchen, and Ashabi Mosley, my main conversation partner. The book centers on Lucumí, popularly called Santería, a West and Central African-inspired “Black Atlantic” tradition. Initiated women are termed iyalorisha, mother of the gods—a Yorùbá title celebrating their reproduction and nourishment of sacred objects that embody the deities, or orishas. Iyalorishas’ spiritual mentorship has a distinctly maternal cast. And, as in everyday life around the world, the tasks of feeding and mothering converge.

Female orishas act as mothers too. Practitioners are envisioned as having two divine patrons, a father and a mother; it is not uncommon to hear someone refer to the latter as “my mom,” “mami,” or “mama.” Yet orishas struggle with mothering almost as much as people do.[1] The orisha of maternity in a universal sense is Yemayá, owner of the ocean, but her tough love sometimes strikes devotees as unduly harsh. While Oyá, guardian of the cemetery, is extolled as “the mother of nine,” according to one myth she abandons her infant son Elegguá on a rubbish pile.[2]

Ochún, the orisha of rivers, sensual pleasure, prosperity, and procreation, has a fraught relationship with motherhood as well. She is said to have given away her twin babies to Yemayá before being blessed with her “child of luck,” Ideú. Devotees describe her as prone to searing self-doubt. A male initiate once told me,

Ochún is your Auntie Mame, as done [on film] by Rosalind Russell, not Lucille Ball. However, you hear Ochún when Lucy sings ‘If He Walked into My Life’—that’s Ochún’s song, her plight…‘Am I too hard on my children?’

Did he need a stronger hand?
Did he need a lighter touch?
…Did I give enough?
Did I give too much?
At the moment when he needed me,
Did I ever turn away?

For practitioners, talking this way is far from blasphemous; like the most commanding characters of stage and onscreen, orishas are simultaneously all too human and larger than life.

Auntie Mame’s famous motto is, “Life is a banquet, and most poor suckers are starving to death!” The same might be said for the orishas: their ceremonies are feasts for the palate as well as for the eye and ear. They each have a prescribed set of delicacies and, as I argue in my book, to be a seasoned practitioner is to know how to feed them. Initiation is envisioned as the marriage of a human bride to a divine husband, and all novices—female, male, gay, straight, cis, trans, non-binary and/or gender non-conforming—are designated iyawo, a word that means “wife.” Iyawos even wear white clothes for a year to mark this rite of passage. In keeping with many newlyweds, they also seek to curry favor with their spouses by anticipating their appetites and mastering a few favorite dishes.

Devotees like Ashabi and Arlene watch culinary competitions on the Food Network, follow foodie blogs on the internet, and faithfully renew their subscriptions to Saveur. When it comes to cooking for ceremonies, though, they take pride in hewing to recipes passed down through generations by word of mouth, meticulously compiled handwritten manuals, and—more recently—published volumes like Miguel W. Ramos’ Adimú: Gbogbo Tén’unjé Lukumí. The orishas are picky eaters but not fickle ones: their diets are too deeply immersed in history and symbolism to change on a whim.

These days, I approach cuisine as the stuff of culture and identity; my partner prepares most of the meals in our household. But Religion in the Kitchen is dedicated to my father and my mother, whose fingernails—typically bitten to the quick—hinted at the sacrifices she made to put food on the table. Without her example I might never have stopped to think about the painstaking labor of cooking in Black Atlantic religions, or sought to learn from it. One timely lesson from traditions like Lucumí: Any day can be Mother’s Day, and any plate an occasion to say thank you.

Elizabeth Pérez is Assistant Professor of Religion at Dartmouth College. She is the author of Religion in the Kitchen: Cooking, Talking, and the Making of Black Atlantic Traditions, (NYU Press, 2016).