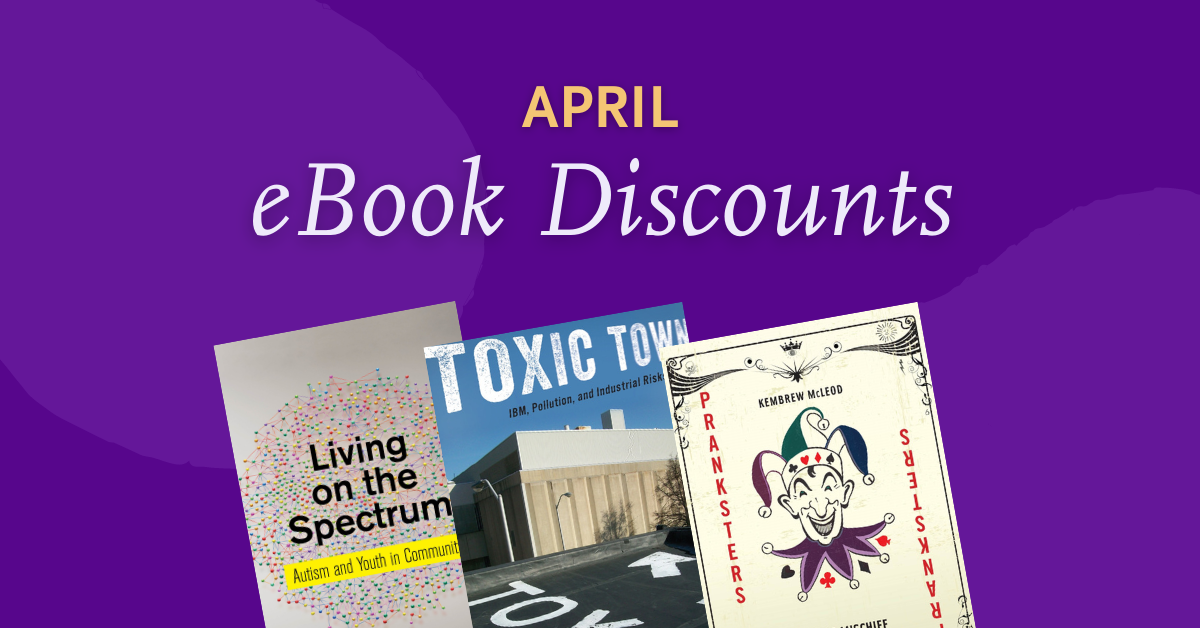 From National Poetry Month to Earth Day, this month is full of celebrations, commemorations, and meditations on various topics, and our April eBook discounts reflect them.

Written in an accessible, story-driven style, Pranksters reveals how mischief makers have left their shocking, entertaining, and educational mark on modern political and social life.

From Benjamin Franklin’s newspaper hoax that faked the death of his rival to Abbie Hoffman’s attempt to levitate the Pentagon, pranksters, hoaxers, and con artists have caused confusion, disorder, and laughter in Western society for centuries. Profiling the most notorious mischief makers from the 1600s to the present day, Pranksters explores how “pranks” are part of a long tradition of speaking truth to power and social critique.

Living on the Spectrum

How youth on the autism spectrum negotiate the contested meanings of neurodiversity.

Autism is a deeply contested condition. To some, it is a devastating invader, harming children and isolating them. To others, it is an asset and a distinctive aspect of an individual’s identity. How do young people on the spectrum make sense of this conflict, in the context of their own developing identity? Youths on the autism spectrum reach beyond medicine for their stories of difference and disorder, drawing instead on shared mythologies from popular culture and speculative fiction to conceptualize their experience of changing personhood. In moving and persuasive prose, this book illustrates that young people use these stories to pioneer more inclusive understandings of what makes us who we are.

Scenes from Arabian life at the turn of the twentieth century.

Arabian Romantic captures what it was like to live in central Arabia before the imposition of austere norms by the Wahhabi authorities in the early twentieth century: tales of robbery and hot pursuit; perilous desert crossings; scenes of exhaustion and chaos when water is raised from deep wells under harsh conditions; the distress of wounded and worn-out animals on the brink of perdition; once proud warriors who are at the mercy of their enemy on the field of battle. Such images lend poignancy to the suffering of the poet’s love-stricken heart, while also painting a vivid portrait of typical Bedouin life.

Water: Abundance, Scarcity, and Security in the Age of Humanity details the remarkable intellectual history of America’s water management philosophy. It shows how this philosophy shaped early twentieth-century conservation in the United States, influenced American international development programs, and ultimately shaped programs of global governance that today connect water resources to the Earth system. Schmidt demonstrates how the ways we think about water reflect specific public and societal values, and illuminates the process by which the American approach to water management came to dominate the global conversation about water.

Examines the religious dimensions of Ralph Ellison’s concept of race.

Ralph Ellison’s Invisible Theology is the first book to focus on Ellison as a religious figure, and on the religious dynamics of his work. Harriss brings to light Ellison’s close friendship with theologian and literary critic Nathan A. Scott, Jr., and places Ellison in context with such legendary religious figures as Reinhold and Richard Niebuhr, Paul Tillich and Martin Luther King, Jr. He argues that historical legacies of invisible theology help us make sense of more recent issues like drone warfare and Clint Eastwood’s empty chair.

Rich and innovative, Ralph Ellison’s Invisible Theology will revolutionize the way we understand Ellison, the intellectual legacies of race, and the study of religion.

The dramatic story of Phillis Wheatley, a free, black poet who resisted the pressures of arranged marriage, truly embodying the ideals of the American Revolution

There is an uncomfortable paradox at the heart of the American Revolution: many of the men leading the war for independence were slave owners, contradicting the ideal of freedom that they claimed to represent. Meanwhile, abolitionist sentiments of the time contained contradictions as well. Abolitionists encouraged freed Christianized slaves to return to Africa. In this way, they hoped to send more missionaries to Africa in order to Christianize the continent and, at the same time, to send free blacks away from America.

This tension is revealed through the dramatic story of Phillis Wheatley, an African-American poet who refused to marry a man she had never met and return with him to Africa as a missionary. She was enslaved in Africa as a child and transported to Boston, where she was sold to an evangelical family. Agreeing to the proposed marriage – arranged by Congregationalist minister Samuel Hopkins – would have echoed the social mores of the time, particularly those for enslaved black women. However, due to her prodigious talents as a poet, Wheatley won her freedom a year prior to Hopkins’ arrangement, allowing her to take her future into her own hands.

Focusing on industrial waterfronts and historically underserved places like Harlem and Staten Island’s North Shore, Checker takes an in-depth look at the dynamics of environmental gentrification, documenting the symbiosis between eco-friendly initiatives and high-end redevelopment and its impact on out-of-the-way, non-gentrifying neighborhoods. At the same time, she highlights the valiant efforts of local environmental justice activists who work across racial, economic, and political divides to challenge sustainability’s false promises and create truly viable communities.

The Sustainability Myth is a cautionary, eye-opening tale, taking a hard—but ultimately hopeful—look at environmental justice activism and the politics of sustainability.

In 1924, IBM built its first plant in Endicott, New York. Now, Endicott is a contested toxic waste site. With its landscape thoroughly contaminated by carcinogens, Endicott is the subject of one of the nation’s largest corporate-state mitigation efforts. Yet despite the efforts of IBM and the U.S. government, Endicott residents remain skeptical that the mitigation systems employed were designed with their best interests at heart.

In Toxic Town, Peter C. Little tracks and critically diagnoses the experiences of Endicott residents as they learn to live with high-tech pollution, community transformation, scientific expertise, corporate-state power, and risk mitigation technologies. By weaving together the insights of anthropology, political ecology, disaster studies, and science and technology studies, the book explores questions of theoretical and practical import for understanding the politics of risk and the ironies of technological disaster response in a time when IBM’s stated mission is to build a “Smarter Planet.”

April eBook deals valid through April 30, 2022, only available through US retailers.