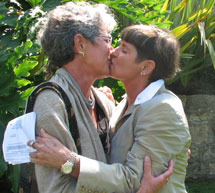 We got married for our 30th anniversary, although not on the actual day. Despite our feminist reservations about the institution of marriage, we did it for political reasons, as an act of resistance to those who loudly and publicly asserted, especially in the Prop 8 campaign, that same-sex couples did not deserve the right to marry because we would corrupt children and destroy the institution of marriage. We did it aware—and in agreement with many—of the queer arguments against marriage: that there are more important issues, that rights should not be attached to marriage, that marriage is homonormative.

So we got married. Does that make us less queer?

Despite the marriage equality movement’s strategic emphasis on the claim that “we’re just like you,” the reality is also that marriage has not necessarily turned out to be the beginning of an inexorable slide into hetero- or homonormativity, as queer theorists predict. The Right is right about one thing: our marriages have the potential to undermine marriage as we now know it. Consider, first of all, the way that a younger generation of queer people is wielding and transforming the terms “wife” and “husband.” It is not unheard of for a stranger to assume a woman who refers to her wife has misspoken and to correct her, saying, “You mean your husband.” That’s in-your-face. Is it possible to imagine that marriages between two men or two women, not to mention transgender or genderqueer people, will transform the meaning of the words “husband” and “wife”? For the better?

And consider the fact that marriage, across blue states in the United States and a number of other countries, is becoming something that heterosexuals enter into later or not at all. Or that they enter into it but exit out of it with increasing frequency. That should reassure us that younger queer people will not necessarily be pressured into marriage just because it is a possibility. For those to whom it means a lot—because it is an important personal expression of love and commitment, because it brings recognition from family and friends, because it provides health insurance or immigration rights or needed tax benefits or inheritance rights or parental rights or the right to make life and death decisions—it may be an option. For those to whom it means or brings nothing, it can be an option not taken. And if queer people, like straight people, more and more eschew marriage, then perhaps the rights that we all deserve will no longer be tied to a marriage license. That would be a victory for the LGBTQ movement.

So just as we reject the notion that getting married magically bestows endless happiness and a lifelong commitment on anyone who ties the knot, we reject the notion that it severs us from the queer community. When strangers ask us if we are sisters, or even twins, as they are increasingly wont to do, and if we say in response, “No, we’re married,” we can assure you that they don’t then think of us as just like them. They still look at us as if we are, well, queer.

Verta Taylor is in the sociology department and Leila J. Rupp is in the feminist studies department at the University of California, Santa Barbara. Taylor is the co-author (with Rupp) of Drag Queens at the 801 Cabaret, and Rupp is the author of Sapphistries: A Global History of Love between Women (NYU Press, 2009).

[Note: An expanded version of this article appeared in the Spring 2014 issue of Contexts, a publication of the American Sociological Association.]