What is the sound of one man drinking? If someone brews a beer that no one drinks, is it still a beer? These Zen koan-like absurdities have become the realities of many craft breweries and craft beer bars as they cope with the fallout of the COVID-19 coronavirus pandemic mandate of “physical distancing.” What may have once been something merely to ponder beneath a Bodhi tree is now a damming situation to deal with: What happens when the beer stops flowing?

One of the key criteria for being considered a craft brewery—at least according to the Brewers Association—is to be “small.” Of course “small” is relative, so much so that grand beer producers like Boston Beer Company or Sierra Nevada (who produce six million barrels a years) are still considered craft in relation to Big Beer behemoths like Anheuser-Busch and MillerCoors. Regardless, the overwhelming majority of the 8000 or so breweries in the Unites States are small; they are small businesses that brew small amounts of beer that serve a small niche of customers often with a small geographic reach through distribution. Those who don’t distribute cans or bottles value small and are happy functioning like a traditional local neighborhood watering hole. Even the smallest of small can have a big impact on social relations and gatherings . . .  well . . .  until those gatherings are no longer permitted.

Page upon page of my book Vegas Brews: Craft Beer and the Birth of a Local Scene relays story upon story of the ways that locals living in a tourist city have fostered a local culture through the production, distribution, and consumption of craft beer. Turning their noses away, and up, from the macro light lagers that still dominate the market, craft beer geeks of all varieties and intensities recognize, at least intuitively, how their beverage of choice is both a social lubricant and social adhesive. As news of COVID-19 and governmental reactions to have spread quickly, with rules turning more stringent each day, the social Band-Aids have been ripped of the proverbial skins of the craft beer industry. In Nevada, I’ve watched our most vibrant and revered local breweries and craft beer bars struggle to stay open by first limiting people inside, then offering carry-out or delivery, and then, for most, eventually shutting it down. All in a week’s time.

No one has blamed or shunned those who have closed. In fact, I’ve seen the opposite. Craft beer fans have independently flocked to pick up cans or have growlers refilled (glass jugs that holds 64 ounces from the tap). One brewery tried to add some levity to the situation by wearing silly superhero costumes during curbside pick-ups. I stopped by one of my favorite haunts to pick up some dinner and beer to-go after I heard the owner laid-off most of his staff to try to keep his bar and restaurant running.  I walked out with five heads of cauliflower, a big bag of celery, and an “air hug” from the owner who was getting rid of inventory before he shut down two days later. I also left with a smile from exchanging pleasantries with a couple who bought beer to drink outside in the parking lot of their favorite beer bar. “If we can’t hang out in there,” said the woman, “we’ll sit in our camping chairs and go back in for seconds.” “And thirds!” her partner chimed in. Anyone was welcome to join them, as long as they stay six feet apart, I imagine.

Staying physically distant yet remaining socially connected has been the underlying theme of participants in the Las Vegas craft beer scene. Many have the beer they need at home, stocked away in designated beer ‘fridges or cellars. But they still crave the company that makes craft beer special. The “bottle share,” where people share beers they brought by doling out small pours to friends and strangers alike, is a fundamental and foundational ritual of the scene. Without others, the ritual fails, though some have taken to Instagram or other social media sites to have virtual shares or trade virtual “cheers” with fellow imbibers. And others continue to show and share what they’re drinking through posted pics or videos.

It’s as if the people matter more than the beer itself, which was kind of the point all along, wasn’t it? The ethos of craft, as I learned from the people I regularly clinked glasses with, promotes the idea that what we consume is as important as how we consume and who we consume with. It’s easy to see how drinking might dull the pains and anxieties brought on by the current pandemic. But doing so alone for too long is unsustainable and unhealthy based on any standards of well-being. So, when we make it out of this crisis and reassess what matters most, maybe breweries and bars will be considered “essential” businesses, even if we can’t gather within those important places together right now. 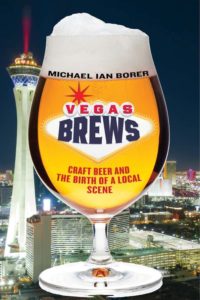 Michael Ian Borer is Associate Professor of Sociology and the Director of Religious Studies at University of Nevada-Las Vegas. He is the author of Urban People and Places: The Sociology of Cities, Suburbs, and Towns; Sociology in Everyday Life; Faithful to Fenway: Believing in Boston, Baseball, and America’s Most Beloved Ballpark; and Vegas Brews: Craft Beer and the Birth of Local Scene, available from NYU Press.

One thought on “Beer and Loathing in a Crisis”