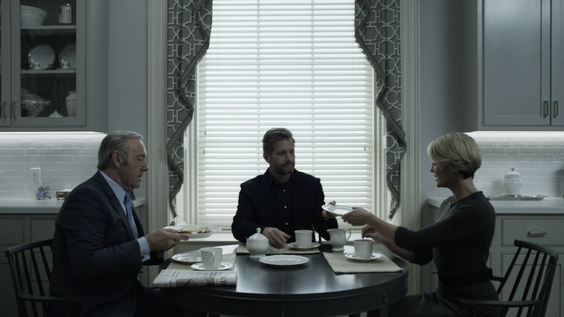 SPOILER ALERT: This post includes detailed accounts of what transpires in the fourth season of the Netflix series, House of Cards.

The latest season of Netflix’s House of Cards features one of the best television representations of an open/poly relationship I’ve seen. The character Claire Underwood, played by Robin Wright, is a confident, smart, and pragmatic woman who demands to share power with her husband, Frank Underwood (Kevin Spacey), who just happens to be the President of the United States. They are in every sense of the phrase, a “power couple.” Frank is, if anything, ambitious, and he is willing to bulldoze anyone who gets in his way. There is little evidence that Frank is interested in or capable of thinking of others. He is a man’s man, embodying a masculinity that is all about ruthless, calculating dominance. That is, ruthless and calculating until it comes to Claire being sexually involved with another man.

In the latest season, however, we see something else emerging. Unlike most mainstream media that feature representations of “extramarital affairs” as a signifier of bad character or as a cautionary tale where the “adulterer” is either punished by losing everything or redeemed by foregoing the other lover, the narrative in HOC moves Claire and Frank from an open relationship to one that looks more like polyamory, emotionally and sometimes sexually intimate relationships with more than one person and where all involved consent.

In season four, author Thomas Yates, played by Paul Sparks is “embedded” in the Underwood’s life in order to write a book about them. Both Claire and Frank express affection for Tom, but it is Claire who acts on that feeling by becoming sexually involved with him. When Claire tells Frank that her relationship with Tom has taken an intimate turn, she suggests that they sever their relationship with Tom to avoid complications. Frank objects by saying,

He should stay on, because he can give you things that I can’t. Look, Claire, we’ve been a great team. But one person—one person cannot give everything to another person. I can’t travel with you. I don’t keep you warm at night. I don’t see you the way he sees you. It’s not my permission to give, but you’ll do what’s right for you. But I want you to know, if you wanted, I know you’ll be careful. And I’ll be fine. I mean, if we’re gonna go beyond marriage, let’s go beyond it.

This is one of the only times that we see Frank demonstrate an ability to selflessly give to another person. When he acknowledges that “…he can give [her] things that [he] can’t,” and that “…one person cannot give everything to another person,” he uncharacteristically acknowledges his own inability to fulfill all of Claire’s needs. Frank explicitly honors Claire’s entitlement to get her needs met in terms of sexual pleasure and intimacy. The line, “It’s not my permission to give, but you’ll do what’s right for you,” names Claire’s autonomy to make her own decisions about her sexual relationships. In this scene, the traditional relationship between husband and wife, where the husband is head-of-household and jealously controls the wife, is re-tooled as a marriage between equals. In HOC, the wife (Claire) is autonomous and entitled to a sexual life independent of her husband, and Frank, the husband, selflessly steps aside so she can.

In the above quote from the show, Frank Underwood suggests they go “beyond marriage” through consensual non-monogamy. I would argue that, as they do so, they are also going “beyond” monogamy and hegemonic gender relations.

As I discuss in my book, Beyond Monogamy: Polyamory and the Future of Polyqueer Sexualities, research shows that men in polyamorous relationships with women often experience a shift in their sense of masculinity (Sheff 2006). I explain in the book that this is so because polyamory necessitates a change in gender relations as they take shape in intimate relationships. Men partnered with polyamorous women must, like Frank Underwood, reject possessiveness and resist a jealous desire to control the women in their lives.

In HOC, Frank is not, in most circumstances, a generous, other-centered, or weak character—in fact, he is the opposite. However, as Frank finds himself partnered with a polyamorous woman, he must display a more compassionate, perhaps feminist masculinity for any of it to make narrative sense. As represented, Claire’s relationship with Tom doesn’t weaken Frank; it opens narrative space to introduce a new side of Frank–a strength and confidence born of selfless giving.

In that same episode, Clare and Frank’s relationship is contrasted with the family life of his political rival, a man who constantly deploys his possession of a supportive wife and two children as a campaign strategy. While Claire wonders if she and Frank should have had children, Frank says their political rivals—represented by the traditional, male-headed household with children, are “who everyone wants to be.” In contrast, Frank says, “We are who everyone wishes they could become.”

Given the context of this conversation, the Underwoods distinguish themselves from society’s ideas of the “perfect couple” by being both child-free and consensually non-monogamous. They are something else–something beyond “perfect”, beyond marriage, and beyond traditional gender arrangements. Rather than representing bad character or immorality, Claire’s increasingly intimate relationship with Tom and Frank’s enthusiastic acceptance of it (the very definition of polyamory) punctuates and solidifies the strength of their marriage as one between equals.

The final scene in this episode offers one of the most positive and accurate representations of what polyamory can be. Tom spends the night in Claire’s bed in the Underwood’s home. In the morning, they join Frank at the breakfast table. Tom appears to be somewhat apprehensive until Frank offers him a piece of fruit. Claire sits and watches as Tom distributes plates, first to Frank and then to Claire.

This representation of sharing at the breakfast table captures what, I believe, is the real potential for polyamory to get us “beyond marriage” certainly, but also beyond thinking of others as possessions and beyond hegemonic expectations for men to be jealous, controlling, and competitive. In fact, and as I argue in the book, polyamory opens up opportunities to “retool” what it means to be a man or a woman in a heterosexual relationship.

As a queer, feminist, polyamorous woman, I was hailed by this episode of HOC. It offered both a positive representation of polyamory and a narrative glimpse of what I tried to convey in Beyond Monogamy. Polyamory has great potential to take us “beyond [traditional] marriage” by encouraging us to rethink relationships, gender, and sexuality.

Mimi Schippers is Associate Professor of Sociology and Gender and Sexuality Studies at Tulane University. She is author of Beyond Monogamy: Polyamory and the Future of Polyqueer Sexualities (NYU Press, 2016).