“Prosecutorial discretion” refers to a decision made by an agency (in this case, the Department of Homeland Security) about whether or not to enforce the immigration laws against a person or group of persons. A prosecutorial discretion grant is significant because it functions as a temporary form of protection from deportation even though the immigration “status” conferred is tenuous. 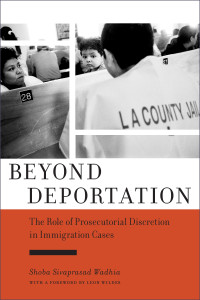 A prosecutorial discretion grant is also important to the agency because it allows the agency to use its limited resources to pursue true enforcement priorities and also injects compassion into an otherwise complex and broken immigration ­system. Beyond Deportation reveals just how much and for how long prosecutorial discretion in immigration law has been grounded on compassion.

Prosecutorial discretion became even more popular after November 20, 2014 when President Obama announced a series of executive actions on immi­gration. These actions include an expansion of the DACA program and the establishment of a new deferred action program for qualifying parents of U.S. citizens and lawful permanent residents in cases where the parents have resided in the United States for at least five years. These most recent deferred action programs are on hold because of litigation by 25 states and the state of Texas against the federal government challenging the legality of these programs. Along with these “on-hold” deferred action programs, the Administration published a new priorities memo entitled “Policies for Apprehen­sion, Detention, and Removal of Undocumented Immigrants.” The priorities memo is operational today and in six pages attempts to spell out the Administration’s priorities for removal and a refined prosecutorial discretion policy.

One of the chapters in Beyond Deportation discusses the immigration case of John Lennon and the efforts undertaken by his attorney, Leon Wildes, to encourage the immigra­tion agency to publish its policies about prosecutorial discretion. The Lennon case is significant because it triggered the publication of the immigration agency’s first guidance on “deferred action,” a form of prosecutorial discretion that has been used as a remedy for individu­als facing compelling circumstances for many years and was showcased most recently with the President’s executive actions. The book offers context to this case by providing a detailed history of “deferred action” and examples of how it has been applied to both individuals and special populations, such as vic­tims of domestic violence, sexual assault, and other crimes. The book scrutinizes thousands of deferred action cases and identifies a historical and humanitarian pattern for the types of cases that are processed and granted deferred action. In the last fifty years, people have received deferred action for largely humanitarian reasons, including the following attributes: advanced or tender age; long term presence in the United States; serious medical condition, or a primary caregiver to a person with a serious medical condition; and family members who are U.S. citizens.

Much of the deferred action data analyzed in Beyond Deportation was obtained through the Freedom of Information Act, or FOIA. In the early years of my FOIA adventures, the data was in some cases disorganized, illegible and elusive. Even obtaining illegible data was remarkably exhausting and sometimes involved multiple communications with FOIA officers, government attorneys and the DHS’s own ombudsman. But the challenge was not limited to the shield held by the agency over the information itself or questions to myself about whether practitioners and scholars should have to file a FOIA to obtain basic information on topics such as ‘how to file a deferred action request.’ The challenges were more complex because some of the data I sought was simply not tracked by the agency. As one example and as a result of a FOIA lawsuit with ICE over deferred action cases, ICE confirmed that it did not track deferred action cases before 2012.

My own experiences in seeking and sorting data inform the book’s discussion about transparency. Transparency in prosecutorial discretion mat­ters because it improves the possibility that justice will be served for people whose roots and presence are in United States. Transparency also promotes other administrative law values like consistency, efficiency and public acceptability. I commend DHS for advancing these values through DACA—by creating a program that is trans­parent and aimed at protecting young people who satisfy the program’s core elements and, in these modern times, reflect the program’s humanitarian roots.

Whether or not prosecutorial discretion has earned visibility for political reasons, understanding the history of prosecutorial discretion and the important role it plays in U.S. immigration law is essential. My own preoccupation with prosecutorial discretion began during my time as law student clerk and later attorney at Maggio Kattar P.C. I worked on a wide range of immigration cases, but the most life-changing cases involved those individuals whose only prayer was prosecutorial discretion. Following the attacks of September 11, 2001, I worked for several years as a legislative lawyer in front of the “political” branches, advocates, and affected communities. In the decade after 9/11, agency officials and policymakers were loath to openly discuss “prosecutorial discretion.” For the last seven years, I have lived in central Pennsylvania writing largely about the role of discretion, teaching immigration, and directing the Center for Immigrants’ Rights Clinic. This professional background combined my personal life experience as a child of immigrants raised in the U.S. with tremendous opportunity, a wife, and mother set the landscape for Beyond Deportation. I am honored to have had the opportunity to write this book and to share some of its origins here.

Shoba Sivaprasad Wadhia is the Samuel Weiss Faculty Scholar, law professor, and director of the Center for Immigrants’ Rights at Penn State Law. She is the author of Beyond Deportation: The Role of Prosecutorial Discretion in Immigration Cases (NYU Press, 2015).