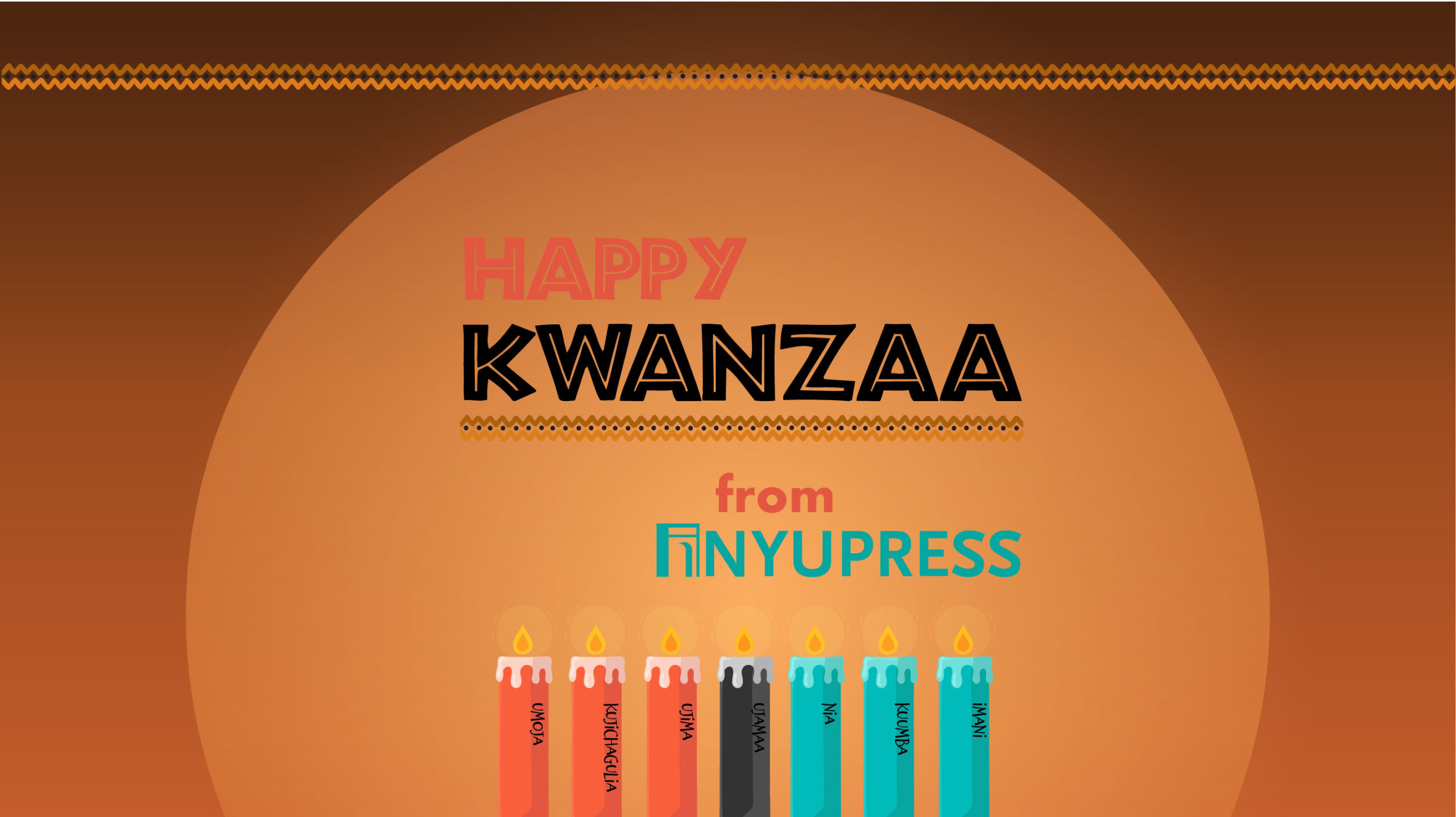 Celebrate Kwanzaa with some amazing African and African American Studies books from NYU Press and WITS University Press. Check out some we cherry-picked below which we hope help you celebrate and honor yourself and heritage through unity, self-determination, collective responsibility, cooperative economics, purpose, creativity, and faith.

Use promocode KWANZ30 when you order any of these books at nyupress.org! 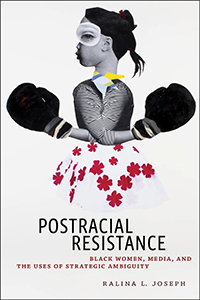 Black Women, Media, and the Uses of Strategic Ambiguity

From Oprah Winfrey, Michelle Obama, and Shonda Rhimes to their audiences and the industry workers behind the scenes, Ralina L. Joseph considers the way that Black women are required to walk a tightrope. Do they call out racism only to face accusations of being called “racists”? Or respond to racism in code only to face accusations of selling out? Postracial Resistance explores how African American women celebrities, cultural producers, and audiences employ postracial discourse—the notion that race and race-based discrimination are over and no longer affect people’s everyday lives—to refute postracialism itself. In a world where they’re often written off as stereotypical “Angry Black Women,” Joseph offers that some Black women in media use “strategic ambiguity,” deploying the failures of post-racial discourse to name racism and thus resist it. In Postracial Resistance, Joseph listens to and observes Black women as they perform and negotiate race in strategic ambiguity. Using three methods of media analysis—textual readings of the media’s representation of these women; interviews with writers, producers, and studio executives; and audience ethnographies of young women viewers—Joseph maps the tensions and strategies that all Black women must engage to challenge the racialized sexism of everyday life, on- and off-screen.
“With the spectacular visibility of Oprah, Michelle Obama, and Beyoncé, such a book is needed now, perhaps, more than ever. To advance conversations about the intersections of race, class, gender, media, and accomplishment, Ralina Joseph introduces us to the concept of ‘strategic ambiguity,’ one that complicates the realities of celebrity life for women of color in the wake of the ‘postracial’ condition.”—Herman Gray, author of Cultural Moves, African Americans and the Politics of Representation 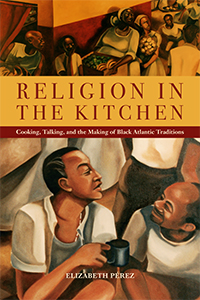 Religion in the Kitchen

Cooking, Eating, and the Making of Black Atlantic Traditions

Before honey can be offered to the Afro-Cuban deity Ochún, it must be tasted, to prove to her that it is good. In African-inspired religions throughout the Caribbean, Latin America, and the United States, such gestures instill the attitudes that turn participants into practitioners. Acquiring deep knowledge of the diets of the gods and ancestors constructs adherents’ identities; to learn to fix the gods’ favorite dishes is to be “seasoned” into their service. In this innovative work, Elizabeth Pérez reveals how seemingly trivial “micropractices” such as the preparation of sacred foods, are complex rituals in their own right. Drawing on years of ethnographic research in Chicago among practitioners of Lucumí, the transnational tradition popularly known as Santería, Pérez focuses on the behind-the-scenes work of the primarily women and gay men responsible for feeding the gods. She reveals how cooking and talking around the kitchen table have played vital socializing roles in Black Atlantic religions. Entering the world of divine desires and the varied flavors that speak to them, this volume takes a fresh approach to the anthropology of religion. Its richly textured portrait of a predominantly African-American Lucumí community reconceptualizes race, gender, sexuality, and affect in the formation of religious identity, proposing that every religion coalesces and sustains itself through its own secret recipe of micropractices.
Winner, 2017 Clifford Geertz Prize in the Anthropology of Religion, presented by the Society for the Anthropology of Religion section of the American Anthropological Association

“[W]ell crafted, theoretically engaging, and insightful . . . Pérez adroitly maps those interstitial spaces often historically relegated solely to women and their labor. This book provides a rare view into the liminal space of the Lucumí cloister and the coded dialogues therein . . . By queering her analysis in Religion in the Kitchen, Pérez substantively and subtly illuminates the temple-house community’s cohesion across its various subject positions . . . The role and signification of who cooks, what they cook, for whom they are cooking, who gets to eat and why suddenly opens up new avenues for inquiry and analysis under Pérez’s gaze.”—Food, Culture & Society 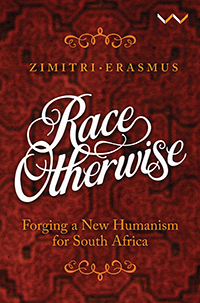 In Race Otherwise: Forging a New Humanism for South Africa Zimitri Erasmus questions the notion that one can know ‘race’ with one’s eyes, or through racial categories and or genetic ancestry tests. She moves between the intimate probing of racial identities as we experience them individually, and analysis of the global historical forces that have created these identities and woven them into our thinking about what it means to be ‘human’. Starting from her own family’s journeys through regions of the world and ascribed racial identities, she develops her argument about how it is possible to recognize the pervasiveness of race thinking without submitting to its power. Drawing on the theoretical work of Frantz Fanon, Sylvia Wynter and others, Erasmus argues for a new way of ‘coming to know otherwise’, of seeing the boundaries between racial identities as thresholds to be crossed, through politically charged acts of imagination and love.

“Race Otherwise brings together the full amplitude of Zimitri Erasmus’s thinking about how race works. It tunes into registers both personal and social. It is not without indignation, and not … insensitive to emotion and … the anger inside South Africa. It is a book that is not afraid of questions of affect.”– Crain Soudien, CEO of the Human Sciences Research Council, South Africa 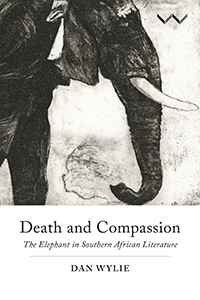 The Elephant in Southern African Literature

According to one estimate, an elephant is being killed every fifteen minutes. This is at the same time that the reasons for being especially compassionate and protective towards elephants are now so well-known that they have become almost a cliché: their high intelligence, rich emotional lives including a capacity for mourning, caring matriarchal societal structures, that strangely charismatic grace. Saving elephants is one of the iconic conservation struggles of our time. As a society we must aspire to understand how and why people develop compassion – or fail to do so – and what stories we tell ourselves about animals that reveal the relationship between ourselves and animals.

This book is the first study to probe the primary features, and possible effects, of some major literary genres as they pertain to elephants south of the Zambezi over three centuries: indigenous forms, early European travelogues, hunting accounts, novels, game ranger memoirs, scientists’ accounts, and poems. It examines what these literatures imply about the various and diverse attitudes towards elephants, about who shows compassion towards them, in what ways and why. It is the story of a developing contestation between death and compassion, between those who kill and those who love and protect.

“Dan Wylie combines a lifetime of experience and meditation with specialist knowledge of debates in ecocriticism and animal studies.”— F. Fiona Moolla, Department of English, University of the Western Cape

“Death and Compassion is an original and highly informative analysis of scientific and nonscientific accounts of elephant ethics and ontology.”— Kai Horsthemke, Chair of Philosophy of Education and Systematic Pedagogy, KU Eichstätt-Ingolstadt, Germany 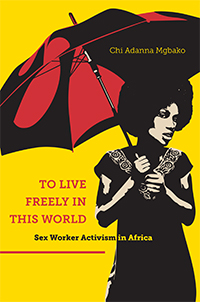 To Live Freely in this World

Sex worker activists throughout Africa are demanding an end to the criminalization of sex work and the recognition of their human rights to safe working conditions, health and justice services, and lives free from violence and discrimination. To Live Freely in This World is the first book to tell the story of the brave activists at the beating heart of the sex workers’ rights movement in Africa—the newest and most vibrant face of the global sex workers’ rights struggle. African sex worker activists are proving that communities facing human rights abuses are not bereft of agency. They’re challenging politicians, religious fundamentalists, and anti-prostitution advocates; confronting the multiple stigmas that affect the diverse members of their communities; engaging in intersectional movement building with similarly marginalized groups; and participating in the larger global sex workers’ rights struggle in order to determine their social and political fate. Based on original fieldwork in seven African countries, including Botswana, Kenya, Mauritius, Namibia, Nigeria, South Africa, and Uganda, Chi Adanna Mgbako draws on extensive interviews with over 160 African female and male (cisgender and transgender) sex worker activists, and weaves their voices and experiences into a fascinating, richly-detailed, and powerful examination of the history and continuing activism of this young movement.
“By taking the sex worker’s narratives as data, Mgbako paints a picture of a more layered landscape to sex work activism than what we normally hear about on an international level.”—Feministing.com

“This monograph presents the first book-length study on sex workers’ activism in Africa, and it makes an important contribution, not only to feminist debates about sex work, but also to the scholarship of social movements and activism in contemporary Africa.”—African Affairs 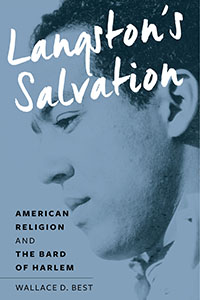 American Religion and the Bard of Harlem

*Sale on Cloth version only, no preorders of paperback

Langston’s Salvation offers a fascinating exploration into the religious thought of Langston Hughes.  Known for his poetry, plays, and social activism, the importance of religion in Hughes’ work has historically been ignored or dismissed. This book puts this aspect of Hughes work front and center, placing it into the wider context of twentieth-century American and African American religious cultures. Best brings to life the religious orientation of Hughes work, illuminating how this powerful figure helped to expand the definition of African American religion during this time.
Winner of the 2018 Award for Excellence in the Study of Religion in Textual Studies, presented by the American Academy of Religion

“Best weaves together the varied and often controversial strands of Hughes’s life—an unsuccessful religious conversion, progressive politics, and an intriguing but doomed trip to Russia to create a film—in order to paint a more complete picture of a nonconformist and his modern relationship with religion. . . a well-researched argument that offers a vivid perspective on a literary giant.”—Publishers Weekly

“Meticulously researched from an interdisciplinary perspective, with attention to the frameworks of religious studies, history, literary criticism, and African American studies, Langston’s Salvation is an indispensable guide to Hughes and religion.”—Choice 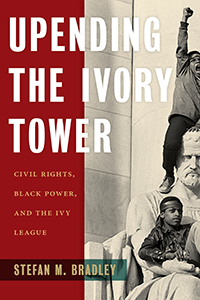 Upending the Ivory Tower illuminates how the Black Power movement, which was borne out of an effort to edify the most disfranchised of the black masses, also took root in the hallowed halls of America’s most esteemed institutions of higher education. Between the close of WWII and 1975, the civil rights and Black Power movements transformed the demographics and operation of the Ivy League on and off campus. As desegregators and racial pioneers, black students, staff, and faculty used their status in the black intelligentsia to enhance their predominantly white institutions while advancing black freedom. Although they were often marginalized because of their race and class, the newcomers altered educational policies and inserted blackness into the curricula and culture of the unabashedly exclusive and starkly white schools. Upending the Ivory Tower not only informs the civil rights and Black Power movements of the postwar era but also provides critical context for the Black Lives Matter movement that is growing in the streets and on campuses throughout the country today. As higher education continues to be a catalyst for change, there is no one better to inform today’s activists than those who transformed our country’s past and paved the way for its future.

“Upending the Ivory Tower is an engaging, revealing, fluid read. It takes its place alongside some of the finest recent scholarship on the Black Power and civil rights movements…”— New York Journal of Books

Use promocode KWANZ30 when you order any of these books at nyupress.org!