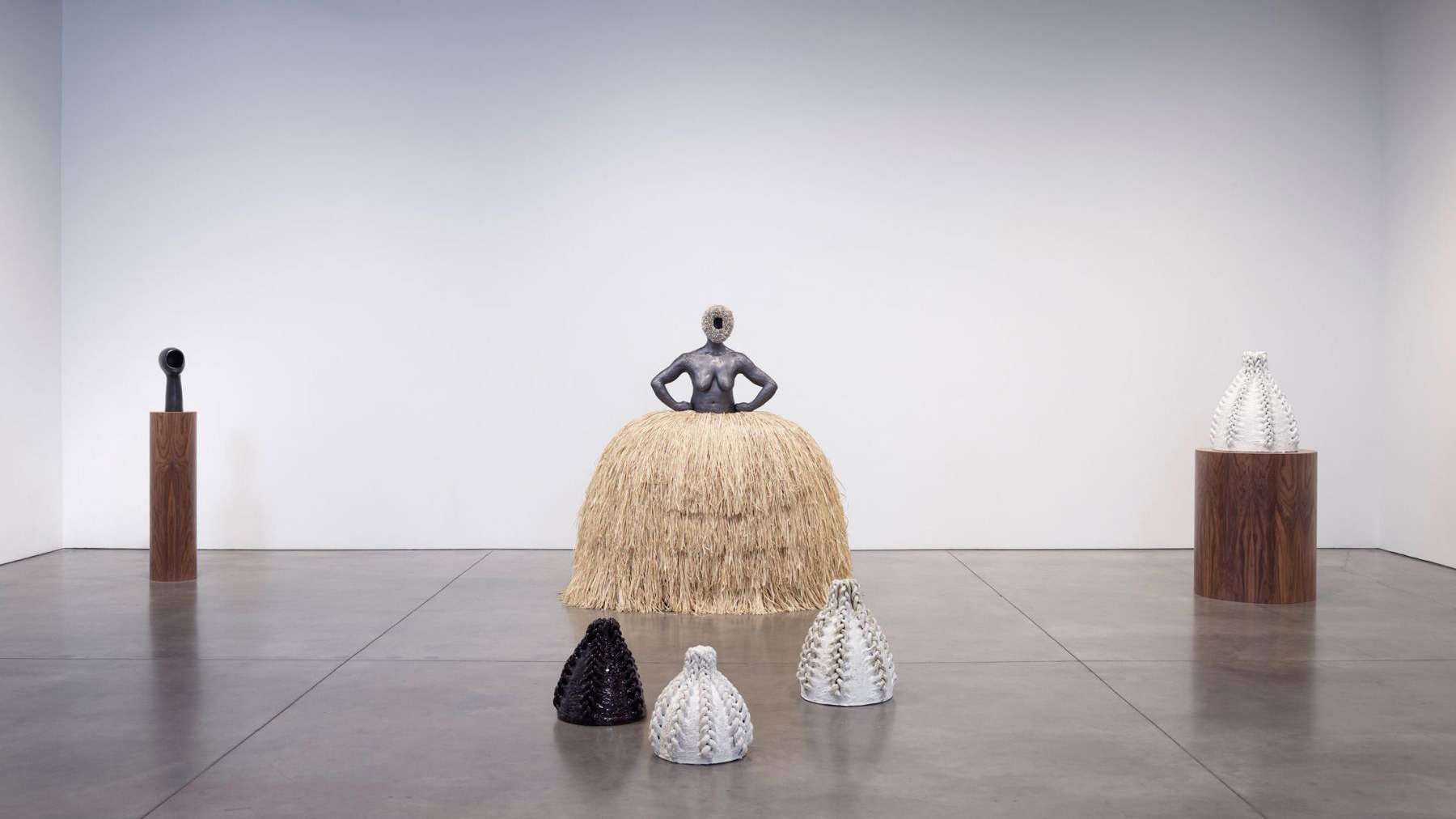 A face that is a jug without eyes, wide-nostriled, thick-lipped sits delicately atop a dark wooden column. Another jug, shaped like a woman with defiant hands-on-hips, bare-chested; her raffia skirt reaching the floor. We know she is a jug because where her face might be is an opening, from which erupt colorful rosebuds that grow like coral from inside to out. Another, glazed in textured white sits on the floor; opening where the braids come together. Another, has a handle that stretches between the top of head and nape of the neck. The tallest one sits atop a bare-breasted, slim body with outstretched arms. Her round jug face, opening and turning toward where her gaze would be.

The sculptures reference multiple things within the African diaspora, including face jugs, which were used to during burials to scare evil spirits away from the dead and women carrying water or goods in jugs on their heads. They feel both historical and insistently present; allowing us to see the movement between person and thing. The figures, who we might imagine to be women are left empty, or rather unknowable. Sometimes in this objectification we might imagine that we seeing the edges of utility—a handle, a spout. At other times, the material—ceramic, bronze, raffia overwhelms, so that we are seeing something that can’t be controlled, a thingness that moves according to its own rules. Something that entices and repels.

Above all, Simone Leigh’s exhibit at Luhring Augustine brings us to ask when objectification, Thingification, and Otherness can coalesce into something else. And by something else, I mean that fiction called selfhood that permits joy, pain, vulnerability, and being with others. The elusive, but important space is where race and sensuality come together. This is the space of brown jouissance and my forthcoming book: Sensual Excess: Queer Femininity and Brown Jouissance.

Brown jouissance aims to bring together violence and possibility in the same frame in order to reclaim and remake selfhood. This claiming of selfhood is necessary and urgent because it allows us to think about brown jouissance as political. In asserting that selfhood exists in relation to minoritarian knowledge production and epistemologies of sensuality, flesh becomes something else, a space of possibility, interiority, and creativity. Rather than merely abdicating subjectivity, this reclamation of selfhood provides a scaffolding for imagining and prioritizing ways of being that center coexisting, caring, and sensuality.

In applying this concept to these sculptures, Leigh rejects readymade concepts of blackness and produces a distance between spectators and the sculptures. It is important that we do not have access to entire faces, that the heights are uneven, and that there are no gazes returned. This speaks to an interiority that exists, but is not accessible to everyone. This is a version of expressivity that emerges in and through constraint. But there is more, in producing a gathering of jugs and thematizing the movement of water by women, Leigh also invokes Oshun, the African deity associated with water and love. Here, it is important to remember that water is necessary for life, but in the context of the African diaspora it also evokes the difficult middle passage and other migrations. These plural selves—jugs, women, deities—speak urgently to possibilities of expression and coexistence that emerge from projections of race, gender, and sexuality. The world that they allow us to see—one of texture, invitation, and danger, is another thing altogether.

Simone Leigh’s exhibition is up at Luhring Augustine through October 20.