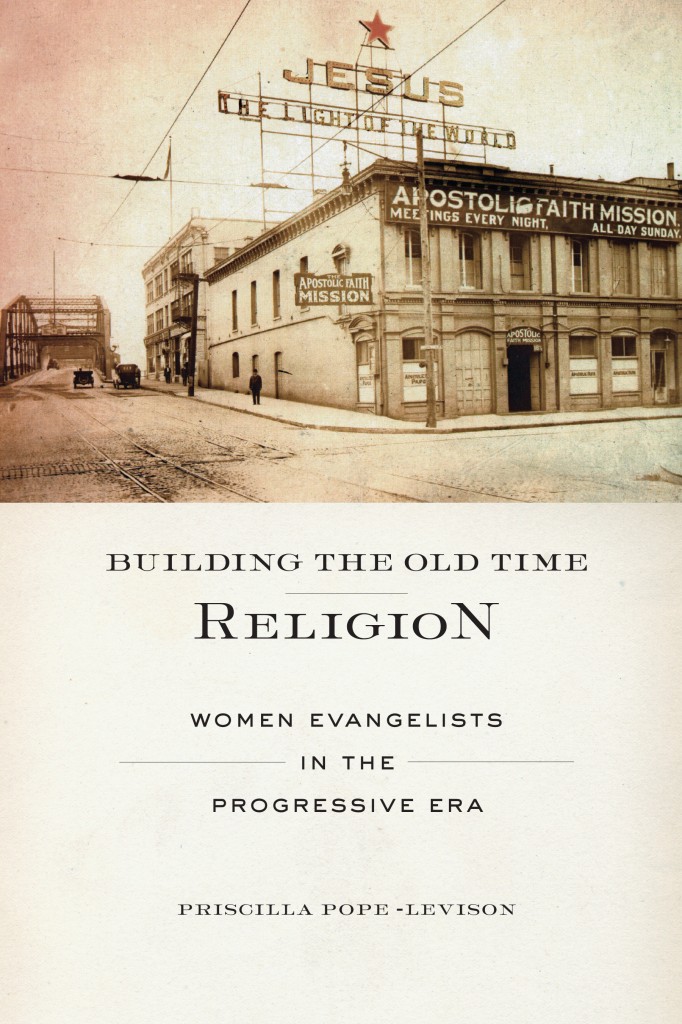 I’ve been writing on women evangelists for some twenty years now, and I thought I’d seen it all: the faith healer Maria Woodworth-Etter, who fell into forty-five minute trances during her sermons with her right arm raised above her head, moving slowly back and forth, and her index finger pointed upward—or Uldine Utley, a child prodigy who at age fourteen filled Madison Square Garden for a four-week, two-sermons-a-day evangelistic campaign.

Then, I traveled from Seattle to Portland, Oregon, where I met, face to face, the legacy of Florence Crawford, a Pentecostal evangelist from the heady days of the 1906 Azusa Street Revival. From Los Angeles, Crawford traveled north to bring the apostolic faith message to the Pacific Northwest and eventually settled in Portland, where she founded the Apostolic Faith Mission (AFM). Her creative and expansive adaptation of transportation technology for evangelism in and around her Portland headquarters ranks as an entrepreneurial marvel.

Crawford began modestly enough with a gospel wagon purchased for $250 in 1908. She owned only the wagon; horses had to be hired for each evangelistic meeting in a Portland park. White canvas stretched tautly over each side of the wagon provided a surface for gospel slogans printed in large capital letters: PREPARE TO MEET THY GOD and TURN YE FOR WHY WILL YE DIE. She quickly transitioned from a horse-drawn wagon to the automotive horsepower of a Federal truck, complete with detachable seats for carrying literature. In 1913, a band of a dozen workers took the truck on its first evangelistic trip, driving from Portland to Vancouver, a one-way distance of more than 300 miles. Within two years, by 1915, she had purchased enough automobiles, fourteen in all, to ensure that each city with an AFM mission—Vancouver, Seattle, Tacoma, Eugene, Dallas, and Portland—had at least one car to use for evangelism.

Once she had amassed a garage full of automobiles, she purchased a 3-passenger Curtiss Oriole, The Sky Pilot, in 1919.  Her son, Raymond, pioneered aerial evangelism, which entailed dropping religious papers from the air, like 1,000 papers over rural Idaho and 9,000 invitations over Portland. Targeted areas for the literature drop included Oregon’s state penitentiary, reform schools, poor farms in Multnomah and Clackamas counties, and town centers throughout greater Portland. Dive bombing areas with religious literature did not last long, however, because in 1922, legal restrictions were passed, prohibiting the practice, so Crawford sold The Sky Pilot.

Not content to evangelize by road and air, Crawford initiated an evangelistic outreach to the sailors aboard merchant ships from many countries docked in the Portland harbor, located about 100 miles from the Pacific Ocean on the Willamette River. For harbor evangelism, she bought a 28-foot motorboat named the Morning Star. AFM workers steered the Morning Star alongside docked ships, and, when given permission by the captain, set up an extension ladder to climb aboard in order to distribute religious literature and invite sailors to services at the mission. For ships whose captains prohibited them on board, the workers launched “gospel grenades”—waterproof packets of religious papers printed in the language of the sailors on that ship. Factoring in the height differential between the Morning Star and a seagoing ship, the grenades had to be thrown as high as fifty feet in the air in order to land on deck.

Obviously, Crawford was nothing if not entrepreneurial in her use of transportation technology for evangelism. Yet there is something distinctive in the way she chose to exercise that entrepreneurial spirit. She hunkered down in one location and launched evangelistic forays from her Portland headquarters. She bought cars to be driven up and down the coast from Oregon north to British Columbia, a plane to drop literature over the entire state of Oregon, and a boat to ply the Portland harbor. In other words, Crawford stayed put and focused her entrepreneurial evangelism in nearby neighborhoods and cities.

In the years prior to the Progressive Era, women evangelists with that same entrepreneurial spirit chose to itinerate. Jarena Lee, for example, who in the 1820s and 1830s itinerated throughout New England, north into Canada, and west into Ohio, traveled by foot, stagecoach, and boat to preach in churches, schools, camp meetings, barns, and homes. Her contemporary, Nancy Towle, preached throughout the United States, Canada, England, and Ireland. These evangelists embody the moniker, “rootless women,” coined by Elizabeth Elkin Grammer in her book, Some Wild Visions: Autobiographies by Female Itinerant Evangelists in 19th-Century America.

Crawford represents the next generation of women evangelists, who settled down from a wandering itinerancy and built institutions to gather in converts, engage in evangelism, and establish a legacy in brick and mortar, in the bylaws and printed materials of their churches, denominations, schools, rescue homes, and rescue missions. In Hicks Hollow, an impoverished enclave in Kansas City, a former slave, Emma Ray, turned a ramshackle, two-story wooden building into a rescue mission for African American children, while at a nondescript crossroad along the foothills of the Appalachians, Mattie Perry founded Elhanan Training School in a former hotel, which she refurbished and furnished. Emma Whittemore launched her first of nearly one hundred Door of Hope rescue homes amidst the squalor of a New York City tenement.

These largely unsung entrepreneurial women evangelists resolved to settle down and build institutions, often financing them with little more than donations of pennies and crates of apples. Remarkably, many of their institutions continue a century later, including Crawford’s Apostolic Faith Mission, which sends out across the globe from its Portland headquarters more than two million pieces of literature each year.

Priscilla Pope-Levison is Professor of Theology and Assistant Director of Women’s Studies at Seattle Pacific University. She is the author of Building the Old Time Religion: Women Evangelists in the Progressive Era (NYU Press, 2013).