We’re proud to publish many important works that challenge and reshape traditional narratives of Black history in America. Find just a few of our favorites below, and through the end of February, get any of these eBooks for just $1.99!

*offer good through February 29, 2020, only available through US retailers 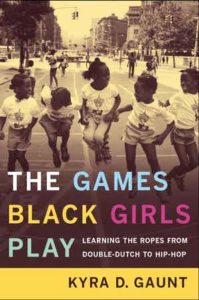 Learning the Ropes from Double-Dutch to Hip-Hop

The Games Black Girls Play illustrates how black musical styles are incorporated into the earliest games African American girls learn—how, in effect, these games contain the DNA of black music. Drawing on interviews, recordings of handclapping games and cheers, and her own observation and memories of gameplaying, Kyra D. Gaunt argues that black girls’ games are connected to long traditions of African and African American musicmaking, and that they teach vital musical and social lessons that are carried into adulthood. In this celebration of playground poetry and childhood choreography, she uncovers the surprisingly rich contributions of girls’ play to black popular culture.

“Fusing academic prose with vividly rendered memories, Gaunt’s journey is refreshing. . . . Gaunt successfully lifts ignored girls from obscurity to center stage. . . . With The Games Black Girls Play, Gaunt has created a necessary space for translating black girls joy in a society that typically overlooks it. Hopefully, others will take their turn and jump in to keep the games going.” —Bitch Media 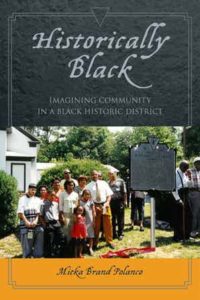 In Historically Black, Mieka Brand Polanco examines the concept of community in the United States: how communities are experienced and understood, the complex relationship between human beings and their social and physical landscapes—and how the term “community” is sometimes conjured to feign a cohesiveness that may not actually exist. Drawing on ethnographic and historical materials from Union, Virginia, Historically Black offers a nuanced and sensitive portrait of a federally recognized Historic District under the category “Ethnic Heritage—Black.”

“Polanco delivers a powerful ethnography of community life among residents living in rural African American historic district in Central Virginia. . . . The text touches on many social aspects of community, and readers will feel as though they are part of the conversation as they read residents’ narrative histories.” —Choice 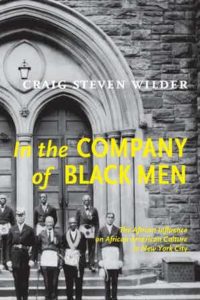 In the Company of Black Men

In the Company of Black Men examines New York City over three centuries to show that enslaved Africans provided the institutional foundation upon which African-American religious, political, and social culture could flourish. Arguing that the universality of the voluntary tradition in African-American communities has its basis in collectivism—a behavioral and rhetorical tendency to privilege the group over the individual—it explores the institutions that arose as enslaved Africans exploited the potential for group action and mass resistance. Presenting a dramatic shift from previous work which has viewed African-American male associations as derivative and imitative of white male counterparts, In the Company of Black Men provides a ground-breaking template for investigating antebellum black institutions.

“In the historiography on blacks in the colonial and antebellum periods, Craig Steven Wilder’s In the Company of Black Men stands out as one of the finest works of scholarship in the last decade.” —Journal of American Ethnic History 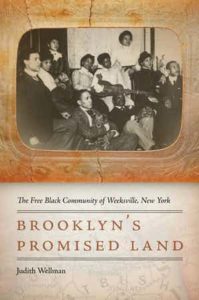 Weeksville was founded by African American entrepreneurs after slavery ended in New York State in 1827. Located in eastern Brooklyn, Weeksville provided a space of physical safety, economic prosperity, education, and even political power for its black population, who organized churches, a school, orphan asylum, home for the aged, newspapers, and the national African Civilization Society. Notable residents of Weeksville, such as journalist and educator Junius P. Morell, participated in every major national effort for African American rights, including the Civil War.

Drawing on maps, newspapers, census records, photographs, and the material culture of buildings and artifacts, Wellman reconstructs the social history and national significance of this extraordinary place. Through the lens of this local community, Brooklyn’s Promised Land highlights themes still relevant to African Americans across the country.

“Judith Wellman has skillfully demonstrated how the success of her subjects transcends their important local history and enriches our understanding of free black life in nineteenth-century America. Brooklyn’s Promised Land is a welcome addition to the growing literature on free African Americans in the U.S. and New York in particular, and merits a place on the shelf of any serious student of antebellum black life.” —American Historical Review 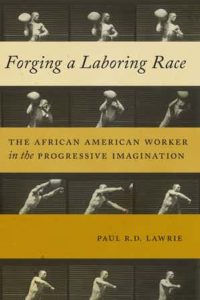 The African American Worker in the Progressive Imagination

“Forging A Laboring Race is an important and imaginative contribution to the history of race and labor in the Progressive Era. It is also a brisk, powerful, and re-orienting critique of the very notion of ‘the black worker’ as a discrete category of experience. This notion was produced by myriad think tanks, self-professed social scientists, and busy-bodied state agencies, and it had real consequences for the men and women who arrived in the urban North in the first Great Migration. It persists to this day.” —Matthew Pratt Guterl, Brown University

“A stimulating account of the uses of sciences and the state in defining blackness in the services of war and capitalism, and important reading for any scholar of race, the progressive era, or modernity.” —Canadian Journal of History 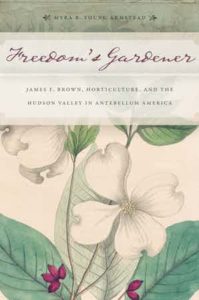 By Myra B. Young Armstead

In 1793 James F. Brown was born a slave, and in 1868 he died a free man. At age 34 he ran away from his native Maryland to pass the remainder of his life as a gardener to a wealthy family in the Hudson Valley. Two years after his escape and manumission, he began a diary which he kept until his death. In Freedom’s Gardener, Myra B. Young Armstead uses the apparently small and domestic details of Brown’s diaries to construct a bigger story about the transition from slavery to freedom.

“Freedom’s Gardener is an excellent example of how historians can transform one person’s life into a story that illustrates the larger picture for both scholars and a broader audience.” —Journal of American History

They Left Great Marks on Me 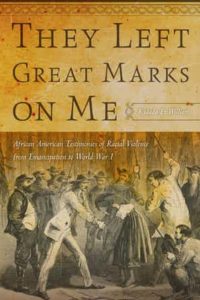 In this evocative and deeply moving history Kidada Williams examines African Americans’ testimonies about racial violence. By using both oral and print culture to testify about violence, victims and witnesses hoped they would be able to graphically disseminate enough knowledge about its occurrence and inspire Americans to take action to end it. In the process of testifying, these people created a vernacular history of the violence they endured and witnessed, as well as the identities that grew from the experience of violence. This history fostered an oppositional consciousness to racial violence that inspired African Americans to form and support campaigns to end violence. The resulting crusades against racial violence became one of the political training grounds for the civil rights movement.
“Williams has offered a fascinating new approach to the study of mob violence and provided a richer understanding of African American experiences under white supremacy.” —Journal of American History 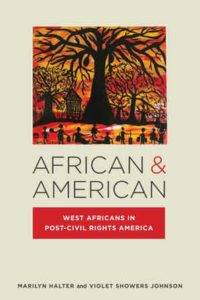 Drawing on a rich variety of sources, including original interviews, personal narratives, cultural and historical analysis, and documentary and demographic evidence, African & American explores issues of cultural identity formation and socioeconomic incorporation among the new West African diaspora. Bringing the experiences of those of recent African ancestry from the periphery to the center of current debates in the fields of immigration, ethnic, and African American studies, Halter and Johnson examine the impact this community has had on the changing meaning of “African Americanness” and address the provocative question of whether West African immigrants are, indeed, becoming the newest African Americans.

“African & American gives a valuable and much-needed voice to the African immigrant experience in America. Focusing on the divide between what it means to be an African and an American, Halter and Johnson reveal the historical complexity around these terms and how newcomers grapple with this reality in the contemporary world.” —Zain Abdullah, author of Black Mecca: The African Muslims of Harlem

We Will Shoot Back In We Will Shoot Back: Armed Resistance in the Mississippi Freedom Movement, Akinyele Omowale Umoja argues that armed resistance was critical to the Southern freedom struggle and the dismantling of segregation and Black disenfranchisement. Intimidation and fear were central to the system of oppression in most of the Deep South. To overcome the system of segregation, Black people had to overcome fear to present a significant challenge to White domination. As the civil rights movement developed, armed self-defense and resistance became a significant means by which the descendants of enslaved Africans overturned fear and intimidation and developed different political and social relationships between Black and White Mississippians.

“By extending the narrative of armed resistance through the late 1970s and emphasizing grassroots activism, this well-researched and beautifully written book succeeds in pushing historiographical boundaries. It will undoubtedly be of interest to scholars and students alike.” —Journal of American History 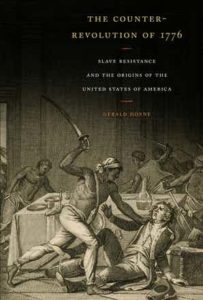 Slave Resistance and the Origins of the United States of America

The successful 1776 revolt against British rule in North America has been hailed almost universally as a great step forward for humanity. But the Africans then living in the colonies overwhelmingly sided with the British. In this trailblazing book, Gerald Horne shows that in the prelude to 1776, the abolition of slavery seemed all but inevitable in London, delighting Africans as much as it outraged slaveholders, and sparking the colonial revolt. The so-called Revolutionary War, Horne writes, was in part a counter-revolution, a conservative movement that the founding fathers fought in order to preserve their right to enslave others. The Counter-Revolution of 1776 brings us to a radical new understanding of the traditional heroic creation myth of the United States.

“The Counter Revolution of 1776 drives us to a radical new understanding of the traditional heroic creation myth of the United States.” —Philadelphia Tribune

“Horne’s study is rich, not dry; his research is meticulous, thorough, fascinating, and thought-provoking. Horne emphasizes the importance of considering this alternate telling of our American origin myth and how such a founding still affects our nation today.” —Publishers Weekly, starred review

*offer good through February 29, 2020, only available through US retailers