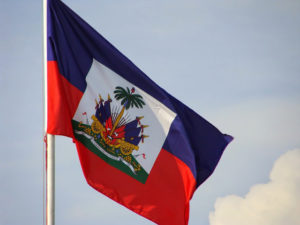 In communities across the globe, thousands of Haitians celebrate Haitian Flag Day every May 18 at concerts and ceremonies, on the Internet and at festivals and parades. The flag not only reflects pride in Haitian roots but it is the flag of the first black republic in the world. The Haitian flag takes on renewed meaning as an anti-racist symbol of revolutionary blackness and freedom in a continuing time of white supremacy and anti-blackness. Its inception was from the Haitian Revolution (1791-1803).

On May 18, 1803, in the city of Archaie, not far from Haiti’s current capital of Port-au-Prince, Jean-Jacques Dessalines, the leader of the blacks and the first leader of an independent Haiti, and Alexandre Pétion, the leader of the mulattoes, agreed on an official flag, with blue and red bands placed vertically. Haitian heroine Catherine Flon, who also served as a military strategist and nurse, sewed Haiti’s first flag. However, the flag was modified on Independence Day (January 1st) when the blue and the red bands were placed horizontally with the blue band on top of the red band. Haiti used the red and blue flag until 1964, when President-for life François “Papa Doc” Duvalier used a vertical black and red flag and added a modified version of the arms of the republic during the Duvalier regime, which lasted from 1971 to 1986. On February 25, 1986, after Jean-Claude “Baby Doc” Duvalier fled Haiti on an American-charted jet and the Duvalier regime fell apart, the Haitian people in its vast majority requested that the red and blue flag be brought back. The red and blue flag remains the official flag of Haiti.

Haiti was the French colony of Saint-Domingue before the revolution. A 1697 treaty between the French and the Spanish created the colony on the western third of the island of Hispaniola. Saint-Domingue was known as “the pearl of the Antilles” because the industrialization of sugar in the region enriched its French absentee owners and made it one of the most successful sugar colonies in history. The arduous labor required for sugar production resulted in the virtual eradication of the indigenous Taino Arawak population and an average seven-year life span for Africans who were brought against their will. In an area roughly the size of Maryland enslaved Africans produced indigo, tobacco and at one point in history two-fifths of the world’s sugar and almost half of the world’s coffee.

Physical and psychological violence were used to maintain plantation production processes. As sociologist Alex Dupuy writes it was not uncommon for slave masters to “hang a slave by the ears, mutilate a leg, pull teeth out, gash open one’s side and pour melted lard into the incision, or mutilate genital organs. Still others used the torture of live burial, whereby the slave, in the presence of the rest of the slaves who were forced to bear witness, was made to dig his own grave…Women had their sexual parts burned by a smoldering log; others had hot wax splattered over hands, arms, and backs, or boiling cane syrup poured over their heads.” Within this violent and dehumanizing environment, many enslaved Africans resisted and fought against their captors and participated in the most radical revolution of the “Age of Revolution.”

The Haitian Revolution was more radical than the American Revolutionary war (1775-1783) and the French Revolution (1789-1799) because it challenged chattel slavery and racism, the foundation of American and French empires. As the late anthropologist Michel-Rolph Trouillot wrote: “The Haitian Revolution was the ultimate test to the universalist pretensions of both the French and the American revolutions. And they both failed. And they both failed. In 1791, there is no public debate on the record, in France, in England, or in the United States on the right of black slaves to achieve self-determination, and the right to do so by way of armed resistance.” The Haitian Revolution led to the destruction of plantation capitalism on the island where both modern-day Haiti and the Dominican Republic are located.

Through the efforts of black people and the leadership of Toussaint Louverture, British and Spanish forces were defeated and independence from the French colonial master was achieved. The only successful slave revolt in human history resulted in the formation of Haiti as the world’s first black republic, which extended the rights of liberty, brotherhood and equality to black people. Unlike the United States and France, Haiti was the first country to articulate a general principle of common, unqualified equality for all of its citizens regardless of race unlike the United States where only propertied white males had the privilege of full citizenship.

The Haitian Revolution would spawn uprisings among captive Africans throughout the Caribbean and the United States. The revolution also influenced other Western Hemispheric liberation movements. Haitian blogger Pascal Robert observes that Venezuelan military and political leader Simon Bolivar went to Haiti to receive the military assistance and material support from Haiti’s then president Alexandre Petion. Bolivar used those Haitian connections to liberate colonial territories from Spanish rule. The Haitian flag reflects and symbolizes this unique and promising moment for people of African descent – black freedom in a world dominated by white supremacy.

Haitian Flag day celebrations take on renewed meaning when we recall the recent treatment of Haitians in the Western Hemisphere. In February 2015 a young Haitian man was lynched in the Dominican Republic. This lynching occurred at a time where the Dominican state has revoked the citizenship of Haitian-descended Dominicans. Essays from sociologist Regine O. Jackson’s edited volume Geographies of the Haitian Diaspora (Routledge 2011) discusses how Haitians serve as repugnant cultural “others” in Jamaica, Guadeloupe, and Cuba. In Haiti a post-earthquake cholera outbreak introduced by Nepalese soldiers from the United Nations Stabilization Mission in Haiti (MINUSTAH) has claimed 9,000 Haitian lives and affected more than 735,000 people. This preventable tragedy is in addition to earthquake aid that did not go to Haitians but mostly went “to donors’ own civilian and military entities, UN agencies, international NGOs and private contractors.” A recent essay from Latin Correspondent reporter Nathalie Baptiste recognizes anti-Haitian policies in Brazil, Canada, the Dominican Republic and the United States.

While we must attend to the differences in the local histories, varying socioeconomic factors and political situations of each country mentioned, a pattern of alienation, expulsion, elimination, marginalization and stigmatization of Haitians is evident when reviewing recent news and scholarly publications.

Anti-Haitianism is also prevalent in the Bahamas where I conduct anthropological research and where a new immigration policyadversely affected Haitians. A brief anecdote that I discuss in my book My Soul Is in Haiti: Protestantism in the Haitian Diaspora of the Bahamas (NYU Press 2014)”illustrates this fact. Towards the end of ethnographic research in New Providence, I was invited by a Bahamian friend to speak about the importance of education to elementary school children at an afterschool program. The children, who all sat around me in a circle, were black. As I spoke to them about the importance of reading, studying, doing well on tests, and getting help when they encountered difficulties, one girl was struck with a look of astonishment when I mentioned that I was of Haitian descent. After my speech I took the opportunity to ask her why she was so stunned. She replied that I didn’t look Haitian to her but that I looked Bahamian. So I asked her “so what does a Haitian look like?” Replying in Bahamian Creole she and her friends replied that Haitians were “scrubby,” meaning that they have an uneven or mottled dark complexion. They also said of Haitians that “Dey (They) black,” “Dey smell bad” and “Dey look like rat.”

These comments came from children who are of African descent (85 percent of the Bahamas is black) and the darkest black-skinned Bahamian child in that group said that Haitians were “scrubby.” This story from the field reflects the current crisis in Haitian identity in the Western Hemisphere and why it is necessary to celebrate Haitian Flag day as a way to resist the dehumanizing effects of anti-blackness. Anti-blackness is a key component of white supremacy “an historically based, institutionally perpetuated system of exploitation and oppression of continents, nations, and peoples of color by white peoples and nations of the European continent, for the purpose of maintaining and defending a system of wealth, power, and privilege.” In this example, young Bahamian children do the work of white supremacy through their use of anti-Haitian and anti-Black stereotypes.

The stigmatization of Haitians in the Western Hemisphere should alarm other black people because Haitian instability also reflects the current insecurity of blacks around the globe. The deaths of West African migrants in the Mediterranean on their way to Europe, Ethiopian Jews who are encouraged to either leave Israel or be imprisoned, police brutality against blacks in favelas in Brazil, and attacks against African immigrants by black South Africans should remind us of this ongoing crisis, which many people view as normative (i.e. there’s always death and destruction among Africans and in the African Diaspora). But we do not have to look outside of the borders of the United States to understand the deprivation of the humanity of black people. The current #BlackLivesMattermovement against police killings of unarmed black people is another reminder of the disposability of black life in the modern world which continues a pattern of anti-blackness that harkens back to the transatlantic slave trade.

Anti-blackness began with the forced marches of Africans from the interiors of the continent to African coasts where they were sold as chattel and would become the engine that fueled European colonial wealth. It continued during the Middle Passage where white captains tightly packed blacks together on slave ships and threw black bodies into the Atlantic Ocean with the hope that large numbers of human cargo would offset increased deaths. Anti-blackness was codified in the colonies and territories where the legally imposed identity of slave was passed from mother to child and became associated with blackness.

Anti-blackness is prevalent during this contemporary period in the media coverage of the killings of Walter Scott and Eric Garner as corporate news channels show their video-recorded killings at the hands of American law enforcement on a loop and refer to the black youth of Baltimore rebelling against unequal treatment under the law as “thugs.” Anti-blackness is also reflected in the current relations between Haitians and the nations they live in as well as how other countries treat people of African descent.

In closing, the Haitian flag reminds us that white superiority and black inferiority are fallacies and have no basis in biology and that white supremacy can be challenged and defeated as the Haitian Revolution demonstrated. Due to the poor treatment of Haitians throughout the Western Hemisphere we should also understand why Haitians are proud of their heritage and celebrate the anniversary of their flag. But the Haitian flag is also a flag that belongs to people of African descent around the globe, as do other flags. It is one of many symbols that Haitians and other people of African descent should utilize in resistance to the dehumanizing and deadly effects of capitalism, state power and white supremacy on black bodies. Overall, Haitian Flag Day should remind all of us to celebrate revolutionary blackness and to continue to challenge white supremacy in the struggle to create dignified lives for black people worldwide.

Bertin M. Louis, Jr. is the author of My Soul Is in Haiti: Protestantism in the Haitian Diaspora of the Bahamas (NYU Press, 2014) and an Assistant Professor of Anthropology and Africana Studies at the University of Tennessee, Knoxville. He is also the creator of #ShamelesslyHaitian, a Twitter event where Haitians express pride and educate others about their history and culture on Haitian Independence Day and Haitian Flag Day. Follow him on Twitter @MySoulIsInHaiti.