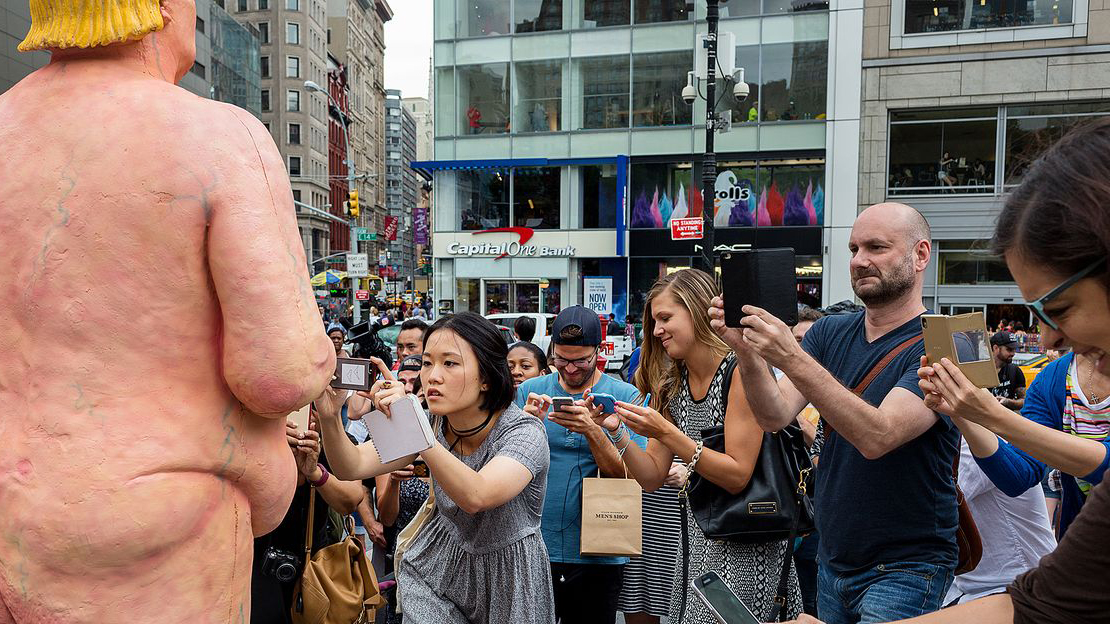 In our divided nation, one thing both sides agree on is that President Donald Trump has broken the mold.

The sense that never before have we had a president like this inspires some opponents to employ unusual tactics. But as anti-Trump discourses proliferate with every new move the administration makes, think twice before sharing that photo of his face superimposed on Queen Elizabeth’s body, or the criticism of Ivanka Trump as his daughter/First Lady, or the image of Trump as a gay man soliciting sex.

There is no shortage of such internet creations; and although they might seem novel, all draw on character attacks as old as the nation and as antithetical to a progressive agenda as President Trump himself.

Take the artistic work of Indecline that cropped up in cities during the campaign. Trump’s naked body on full display was meant to speak volumes, to challenge a vision of him as powerful and virile. “The Emperor Has No B—-” read the plaque at the foot of the piece.

Many perceived this as an effective way to counter the accusations made by candidate Trump that Hillary Clinton lacked the “stamina” to be president. But still others rightly noted that it did little but support those who seek an idealized body-type for masculine leadership – body shaming, indeed.

Creative? Yes. New? Maybe not. Although ever-changing, body ideals have been mobilized since the American Revolution and have been, in modern times, used to make figures such as George Washington appear more masculine and more in keeping with current standards than 18th century types.

Then there are the popular images of Trump as Queen Elizabeth, a commentary on his authoritarian leadership approach but also, undoubtedly, to undercut his claims to manliness – and drawing very effectively on long histories that shame gender-blurring. Such contrasts also highlight and play on bodily and character differences that we assume to exist between leaders (manly) and others. This occurred even at the time of the American Revolution when Washington was depicted by the British as a cross-dressing tyrant. Today they inform politicized art, such as in a colorful mural that plays on the image of Washington as the man’s man and make it possible for an image of him in a dress to carry such shock and resonance.

Trump has also emerged as a gay man seeking casual sex – a photo of him holding up an executive order has been modified so the text is instead a tawdry personal ad, worthy of 18th-century attacks on personal character in an effort to derail public policies and presence. And there’s a fake photo of him holding onto a leather-clad Putin. And another one, recently projected on buildings in New York City, depicting a naked, pregnant Trump, affectionately embraced by an equally naked Putin.

Even the criticism of Trump’s family members has historical roots. Melania Trump has been criticized for not immediately occupying the White House with family in tow to complete the nuclear family that we’ve come to expect from the president’s First Family.

And, Ivanka has been tarred as a daughter-First Lady substitute in her stead. We’ve seen this before. Aaron Burr’s relationship with his daughter was the source of intense criticism about the nature of their relationship (complete with incestuous insinuations) and widowed Jefferson relied heavily on his daughter, Martha, to serve functionally as a First Lady.

So, yes, to be that clichéd historian, we’ve seen it all before.

It’s no wonder that the first shiny thing that opponents see that criticizes Trump sparks a reflex to share or retweet. After all, nothing of substance has yet seemed to stop the changes that we are witnessing. Perhaps this photo of him in a dress will do it? And if not, it will at least bring humor to those feeling beleaguered?

The memes are obviously well-aimed to get under his famously thin skin. And yet anti-Trump discourses have too often reverted to old tropes — and progressives would do well to steer clear of them lest we find ourselves reinforcing a world we work hard to leave behind.

[This op-ed originally appeared in the Chicago Sun-Times.]