[This article originally appeared in The Baltimore Sun.]

Political pundits have wondered whether Hillary Clinton will enjoy the same enthusiastic support from the African-American community in her presidential bid that President Barack Obama received. Others have wondered whether she deserves it. After her April 29th speech at Columbia University in New York City, there can be no doubt that the answer to both questions is a resounding “Yes!” 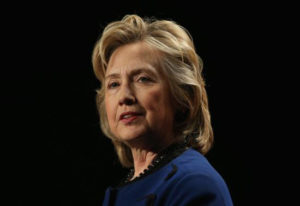 In her speech, Ms. Clinton spoke about the protest in Baltimore, expressing concern for Freddie Gray’s family, condemning the violence and calling for its immediate cessation. Most importantly, her wide-ranging discussion of the causes of the turmoil and her proposed solutions demonstrate a deep and thoughtful understanding of long standing racial inequities both in the criminal justice system and in the broader economic and political arenas throughout America.

Ms. Clinton began by recognizing that something is seriously wrong in the current relationships between police and the minority community. She is absolutely right. Relations in Baltimore have been strained for decades due to unnecessarily harsh policing practices and outright race discrimination by the police. Baltimore has paid over $6 million in court judgments and settlements in over 100 lawsuits alleging police brutality since 2011, according to The Baltimore Sun. Ms. Clinton also noted the stark racial disparities that exist in sentencing and incarceration. As Ms. Clinton declared, “African American men are still far more likely to be stopped and searched by police, charged with crimes and sentenced to longer prison terms than are meted out to their white counterparts.”

As one step for dealing with this national problem, Ms. Clinton called for body cameras on every police officer in the nation. This is an excellent start as bad relations have been exacerbated due to a lack of full and complete information on incidents or conflicting testimony where even implausible police officer accounts are accepted as truth. Body cameras are not a cure-all, but they certainly would increase the level and accuracy of information and would likely lead to more indictments and convictions of officers who commit police misconduct. It is hoped that the risk of exposure would also significantly reduce such conduct.

Ms. Clinton’s most important observation, though, was that the issues raised by the death of Freddie Gray, who died from a spinal injury received while in police custody, concern far more than police practices. She explained that a comprehensive approach is desperately needed to address long standing problems. She began by focusing on the long-term significant disparities in unemployment. As Ms. Clinton knows, unemployment among blacks in Baltimore is twice as high as that for whites and, in some neighborhoods for black youth 20-24 years of age, it is three times as high. As Ms. Clinton said, “There is something wrong when more than one out of every three young black men in Baltimore can’t find a job.” It is hardly surprising that almost a quarter of blacks in many Baltimore neighborhoods are living in poverty. Even more alarming, nationally the median net worth of whites is 18 times that of blacks, a wider wealth gap by race than existed in South Africa during apartheid. Freddie Gray’s tragedy then, requires us to finally talk about, as Ms. Clinton said, “what’s needed to provide economic opportunity, better educational chances for young people, more support to families so they can do the best jobs they are capable of doing to help support their own children.”

The speech was not, of course, the first time that Ms. Clinton has addressed issues of racial justice. Last summer, she discussed inequality in the political arena. She focused on racial inequities in voting rights, condemning restrictive voter identification laws and restrictions on early voting and same day registration. She was particularly critical of the 2013 Supreme Court decision in Shelby County v. Holder. In that case, the court invalidated the so-called “pre-clearance” requirement of the 1965 Voting Rights Act, which required states with a history of race discrimination in voting to secure federal approval prior to changing election practices. Ms. Clinton noted that the Voting Rights Act is one of the most democratizing pieces of legislation ever passed in the United States, allowing over 800,000 new voters, primarily black voters, to register within four years of its passage. She also knows how easy it is for states to create restrictive practices that have a disproportionate impact on minority voters. Ms. Clinton has rightfully called for a new Voting Rights Act, recognizing that, throughout the nation, voter suppression based on race remains a serious problem.

Hillary Clinton understands not only that black lives matter, but that justice requires fundamental reform in the courts, on the streets and in classrooms, offices and voting booths. That is why, I predict, by Election Day, she will be embraced, with enthusiasm, by the African-American community.

F. Michael Higginbotham is the Joseph Curtis Professor of Law at the University of Baltimore School of Law and author of Ghosts of Jim Crow: Ending Racism in Post-Racial America (NYU Press, 2013).