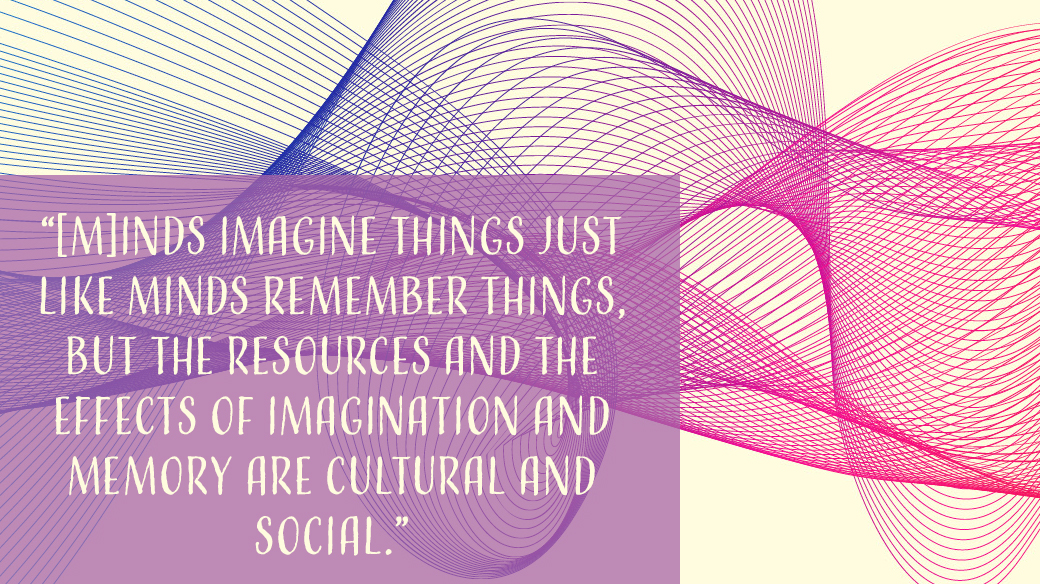 This article was originally published in Culture, Cognition, and Action.

Over the past few years, I have been thinking about the concept of imagination. It emerged out of my efforts to understand the generational change in public opinion about same-sex marriage in the U.S. when it became clear to me that young and old simply imagined homosexuality and same-sex marriage in different ways [see also three essential readings on the imagination: (Appadurai 1996; Orgad 2012; Strauss 2006)]. It wasn’t that the two cohorts disagreed about the issue; it’s that they couldn’t even understand each other. I realized that the imagination represents an implicit domain of political cognition that by-and-large goes unrecognized and unacknowledged by people when they talk to each other, while nonetheless structuring the debate in a way that is similar to framing.[1] I published my initial argument here (No paywall!), and have elaborated on this theory of imagination in my recent book (Definitely paywall!).

One thing that sets my view of the imagination apart from the ways that some other social scientists invoke the concept is that I see an important connection with the concept of collective memory. In many usages (e.g. Castoriadis 1987; Taylor 2002), the idea of the social imagination or the social imaginary is so broad that it most closely approximates the concept of culture—that incomprehensible whole that signifies everything and nothing all at the same time (Strauss makes this critique effectively). By contrast, I think the argument that Olick (1999) makes for collective memory fits well with Strauss’ critique of the social imaginary: we need a dual, individualist-collectivist theory of the imagination, one that anchors the cultural and cognitive versions of the concept in each other. Simply put, minds imagine things just like minds remember things, but the resources and the effects of imagination and memory are cultural and social.

Certainly, the cognitive process of remembering is distinguished in part by its retrospective temporal horizon, and in the empirical work of many sociologists (Baiocchi et al. 2014; Perrin 2006), the imagination’s temporal horizon is future-oriented: actions that we could take to solve a problem, or visions of a better society. Thus, it makes some sense (from a phenomenological perspective, at least) that we can think of collective memory and the social imagination as cultural-cognitive processes that occupy different spots on a temporal continuum.

However, I’d like to make the case that the social imagination is not just future-oriented, but present-oriented. I will also make the case that collective memory may be fruitfully theorized as the past-oriented variant of the social imagination. The ultimate goal of this essay is to persuade sociologists that the imagination is something of a master cultural-cognitive process, with variants that correspond to different phenomenological time horizons, and that is influenced by positive and negative socio-emotional forces.

In purely psychological terms, the imagination is the mind’s capacity to construct a mental image of a non-present phenomenon. Whether past-, present-, or future-oriented, and whether the imagined entity is real (horse) or unreal (unicorn), the cognitive process is essentially the same. Sociologically speaking, however, different imaginations have different effects: individuals’ imaginations of stereotypical and counter-stereotypical people will either reinforce or attenuate prejudicial attitudes and implicit biases (Blair, Ma and Lenton 2001; Slusher and Anderson 1987). Thus, there are political consequences to people’s imaginations: cultivating one’s capacity to produce (and act on) counter-stereotypic mental images may be an effective strategy for combatting implicit racism, sexism, and other forms of enduring prejudice.

As far as I’ve read, Glaeser’s (2011) Political Epistemicsis one of the master treatises on the social imagination, though he doesn’t put it in those terms. Glaeser uses “understanding” to refer to this realm of cultural-cognition, and he uses the term to refer to both the process and its outcome. On page 10, Glaeser begins his definition of understanding by characterizing it as a process: “Understanding is a process of orientation…”; however, one page earlier, Glaeser writes of it as an achievement, or outcome: “understanding is achieved in a process of orientation…” My own view is that the imagination is this process of orientation that produces understandings. This follows Kant (1929), who, in Critique of Pure Reason, argues that the “transcendental power of imagination” is the fundamental  synthetic capacity of mind that combines perception and the cultural categories of understanding, thus structuring all human knowledge and experience.

If we keep this Kantian philosophy of the imagination at the center of our thinking, we might also conceive of memory as another species of imagination: one in which the original sensory perception took place in some bygone time and which is continually brought to life in mental images in the present by synthesizing those past perceptions with current mental structures (hence, the well-known power of our memories to change over time and for our present biography, self-identity, and social context to shape our memories into something other than what actually happened).

In sum, the imagination can be future-oriented (our ability to imagine possible future actions or solutions to social problems), present-oriented (our schemas, stereotypes, and understandings), or past-oriented (our memories).

Beyond distinguishing these three different forms of imagination, as classified by their temporal horizon, we should differentiate between real and fantastical variants of each. Since a simple distinction between real/correct and unreal/incorrect versions of a mental image is philosophically untenable (even impossible, in the case of future-oriented mental images—things that have not yet occurred), I would argue that any given mental image should be conceived as existing on a continuum, whose polar ends represent ideal-typical, emotion-driven fantasies that “pull” our imagination in either direction. In this rendering, the ideal-typical end points are the only points on the continuum that could be labeled as the purely unreal; actually existing mental images would fall somewhere on the continuum and whose degree of “realness” is variable and relationally determined.

The point of establishing this continuum is not to determine whether one imagined mental image is more correct than another in some absolute sense, but rather to begin to discern the socio-emotional forces that are inevitably involved in the process of imagination and the sociological consequences of producing various kinds of mental images. For example, the prevalence of handgun ownership and attitudes about gun rights in the U.S. must certainly take into account the fear-driven imagination that a criminal who is waiting to rob and murder you is hiding behind every corn stalk in the state of Iowa. Whether past-, present-, or future-oriented, our mental images of reality are constructed within a socio-emotional landscape; as social scientists, it behooves us to think seriously about those landscapes, how they affect our imaginations, and how social action ultimately makes sense to the actors who imagine the world as they do.

Thus, we have three different continuums for the social imagination—one for each temporal horizon—in which mental images are constructed. The mental image’s location on the continuum is influenced by the extent to which positive and negative emotional circumstances influence the process of imagination.

Let’s take the domain of future-oriented imagination first: the domain of possibility. The social imagination of the possible is inevitably informed by the emotions of fear and hope and situated in relation to social conditions of dystopia and utopia. Karen Cerulo (2008) has already written on the cognitive and cultural dynamics of this domain. Another notable example of the sociology of possibility is Erik Olin Wright’s “Real Utopias” research program (e.g., Wright 2013), which promises a sociology of liberation if we take it seriously.

The social imagination of the present happens in the domain of understanding. As mentioned above, Glaeser’s Political Epistemics is the essential read on how processes of validation reinforce and challenge existing understandings. Glaeser labels these types of validation as recognition, resonance, and corroboration. In addition to them being cognitive, cultural, and social in nature, they are also emotional. The present-oriented process of imagination is anchored by two fantastical emotional tendencies: the extreme cynical denial of reality that we might call delusion, and the extreme polyannaish denial of reality that we might call naiveté. All understandings and misunderstandings can be conceived in terms of their socio-emotional tenor, as well as in their cognitive, cultural, and social terms.

Finally, turning to the domain of memory, our imaginary reconstructions of past events are influenced by the socio-emotional poles of denial of the negative and romanticization of the positive. The unreal social recollections driven by these emotions are those of erasure and nostalgia: in its extreme forms, collective memory has the potential to totally eliminate the past or construct a fantasy past that never existed. One classic sociological illustration of the importance of nostalgia is, of course, Stephanie Coontz’s The Way We Never Were (1992); this example shows clearly how the romanticization of the past is not purely cognitive or cultural, but structured by institutional power relations like those that reinforce patriarchy. In a parallel (maybe mutually constitutive) way, structures of oppression contribute to the ongoing erasure of women, people of color, and the working class from history in part because of how the socio-emotional consequences of these structures lead to us to produce distorted imaginations of the past.

Obviously, these are just simple thumb-nail sketches, but I believe that understanding the social imagination in its various temporal horizons is important, not just for explaining social action (in the interpretive, symbolic interactionist vein) but also for creating social change. Positive and negative emotions are powerful forces, and the terms on which people produce their imaginations of the world will also affect how they act in that world. Like the old idea of cognitive liberation (McAdam 1982) implies, how we imagine the world can determine whether we mobilize for justice or surrender to despair. The social imagination is very much like other social institutions; it is a cultural entity in which past, present, and future intersect. Sociology should devote some attention to this institution as we do to the others. 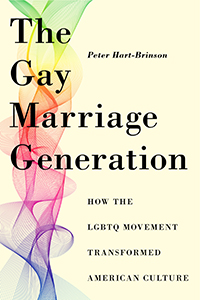 Peter Hart-Brinson is Associate Professor of Sociology and Communication/Journalism at the University of Wisconsin-Eau Claire. He is the author of The Gay Marriage Generation: How the LGBTQ Movement Transformed American Culture.

Use promocode HARTBRIN10 for 10% off and free shipping when you order on nyupress.org today. Offer good until 12/31/2018.

Slusher, Morgan P., and Craig A. Anderson. 1987. “When Reality Monitoring Fails: The Role of Imagination in Stereotype Maintenance.” Journal of Personality and Social Psychology, 52 (4): 653-662.

[1] Framing and imagination are different concepts, and it is important to distinguish between them. Framing is a communicative process with cognitive effects, while the imagination is fundamentally a cognitive process, albeit with cultural influences. Setting that difference aside, though, and focusing purely on the sociological level of each concept, the social imagination is the process that shapes the pattern of associations that define cultural schemas, while framing is the process that shapes explicit cognition (for more on how framing works through deliberate, rather than automatic processing, see Nelson, Thomas E., Rosalee A. Clawson, and Zoe M. Oxley. 1997. “Media Framing of a Civil Liberties Conflict and its Effects on Tolerance.” American Political Science Review91 (3): 567-583.)