A friend who cycles competitively just sent me a link to the new policy on transgender participants in the Eastern Collegiate Cycling Conference. It seems like a progressive and welcoming policy, stating that:

“The ECCC particularly recognizes the challenges facing transgender athletes. Such members of the community should compete in the gender category most appropriate to their unique personal situation.”

The release of this policy highlights the growing centrality of issues of non-normative gender and sexuality in athletic competitions as well as in the wider cultural sphere. The prominence of such concerns, as well as the challenges ahead, were highlighted in the weeks leading up to the 2014 Olympic games, as tennis great Billie Jean King called for a LGBTQ “John Carlos moment”—referring to the African American 1968 Olympic medalist who stood on the winners’ podium with lowered head and raised fist, becoming an iconic symbol for social justice.

Meanwhile, a little-noted story out of Iran highlighted the extent to which international sports must still contend with its own legacy of gendered injustice. In February, on the cusp of Women’s History Month, it was reported that players in Iran’s women’s soccer league were being subjected to “gender testing” and that a number of players were subsequently expelled from the team for failing to qualify as “real women.” 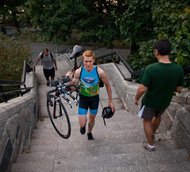 Sex testing in female athletics has a long and tarnished history dating back to the 1940s, and has included requiring female athletes to parade naked before male doctors, performing invasive medical exams, and mandating genetic and hormonal testing. Indeed, from 1968 until the early 1990s, all elite athletes competing as female were required to carry “certificates of femininity,” issued by the International Association of Athletics Federations. Such universal sex testing was abandoned more than a decade ago, but female athletes who are perceived as overly “masculine” are still required to undergo sex testing and even medical treatment in order to remain eligible.

Representations of the Iranian soccer controversy in the Western media have invoked anti-Islamic stereotypes of backwardness, suggesting that gender confusion was caused by the body-masking uniforms worn by the soccer players. These stories ignore the long history of female athletes from all nations and in the skimpiest of running outfits being challenged and subjected to sex testing, their bodies closely analyzed for signs of masculine “hardness,” “strength,” and “power.”

Media reporting on the Iranian women’s soccer team also reflects a common and disturbing tendency to blur together the very different topics of transgender athletes, intersex athletes, and athletes suspected to be cisgendered men deliberately pretending to be women. The International Olympic Committee recently revised its gender policies in part to attempt to disentangle these categories—although the new policies are rife with their own problematic understandings of “sex” and “gender.”

To return to the ECCC policy, after appreciating its initial trans-positive language, I was dismayed to read the next paragraph:

“Competitors may be asked by the Conference Director(s) and/or their designee(s) to furnish two pieces of documentation from relevant legal, medical, or academic authorities documenting personal sex, gender, or gender dysphoria supporting their selected competition gender category.”

Such requirements show how assumptions about the necessity for biocertification can both underpin and undermine even the most well-meaning of policies directed toward people who do not fit neatly into gender binaries.  It is likely that, just as in international female athletics, the cyclists most likely to be asked to provide documentation are those who appear suspiciously “masculine,” yet identify as female.

However, I did notice a peculiar difference in this policy compared to those adopted in the Olympics and other sports settings: The athlete can provide material from “relevant legal, medical, or academic authorities” to support their gender identification.

To my knowledge, no other athletic gender policy allows for “academic” documentation, and I can’t help but wonder what such documentation would look like: Would a note from Judith Butler suffice? Certainly, this unusual addition to a biocertification policy indicates that queer, trans*, and feminist scholars should not discount the relevance of our work to the everyday contestations of gender in sports and other sites of global exchange.

Ellen Samuels is Assistant Professor of Gender and Women’s Studies and English at the University of Wisconsin at Madison. She is the author of Fantasies of Identification: Disability, Gender, Race (NYU Press, 2014).

One thought on “Cycles of gender testing”