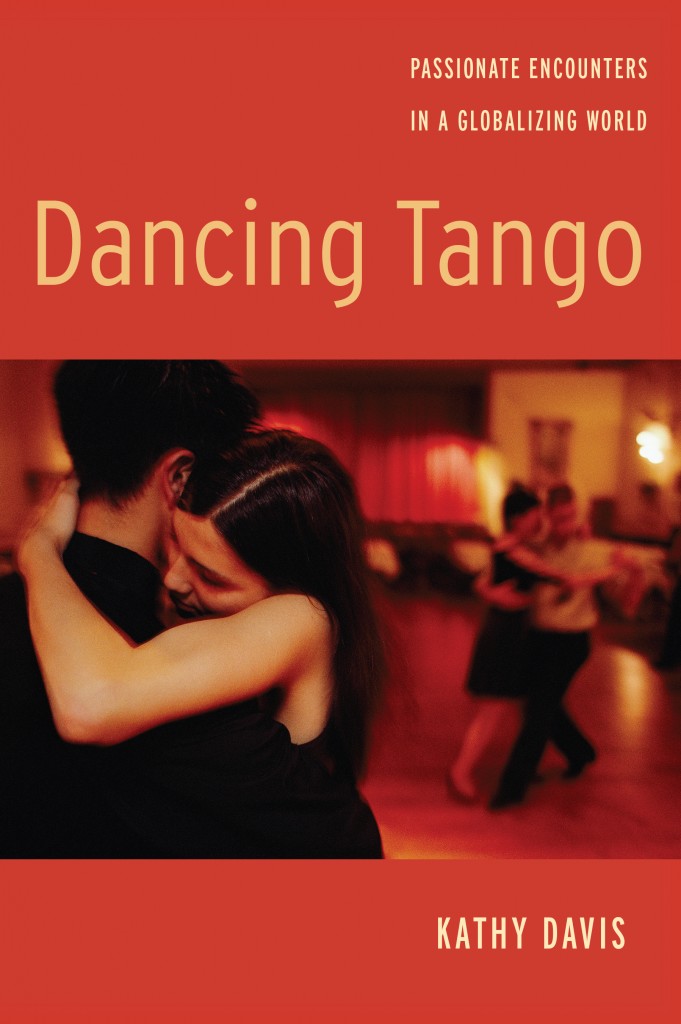 Argentinean tango is a global phenomenon. Since its origin, it has crossed and re-crossed many borders. Yet, never before has tango been danced by so many people and in so many different places as today. In her new book, Dancing Tango, Kathy Davis shows why a dance from another era and another place appeals to men and women from different parts of the world.

In the Q&A below, Davis gives us a glimpse into the world of tango dancing, and the hierarchies of gender, sexuality, and global relations of power in which Argentinean tango is—and has always been—embroiled.

Q: When did you first become passionate about tango and why?

Kathy Davis: My first encounter with Argentinian tango was in Amsterdam many years ago when I wandered—quite by chance—into a place called a “tango salon.”  I had no idea what this was, but was curious enough to go in and take a look. What I saw there, were men and women of different ages and lifestyles, dancing in a close embrace to music from another era. Aside from wondering why on earth people would want to dance to such old-fashioned music, I was intrigued by women dancing with their eyes closed and an expression of utter rapture on their faces. I still clearly remember thinking, ‘Wow, if I only could know how that feels!’ It wasn’t until many years later that I decided to learn to dance tango myself but, once I started, I never looked back.

Your research is based in both Amsterdam and Buenos Aires. How are their social contexts different for tango?

Buenos Aires is where tango originated and where it has a long tradition. Although most Argentinians do not actually dance tango, everyone is familiar with the music and considers tango as a treasure that Argentina has given to the world. Today, there is a vibrant dance community in Buenos Aires, with dozens of different venues each night where locals and tango lovers from across the globe meet to share their passion for the dance. In Amsterdam, there are only a few tango salons. They tend to be much smaller, but are otherwise pretty much the same as the salons in Buenos Aires: the music, the style of dancing, and the rules about how to behave on the dance floor are almost identical.

However, there are important differences, the most noticeable having to do with gender. In Buenos Aires, it is a tradition that men and women sit separately, invitations to dance occur by making eye contact and a subtle kind of mutual nodding called cabaceo, and men escort women to and from their tables before and after a dance set. Men and women cultivate gender differences in both in their appearance and their (often openly flirtatious) behavior. In Amsterdam, ‘sex-segregation’ in a salon would be regarded as hopelessly old-fashioned. Women resent having to wait to be asked to dance and many even have problems being led by their male partners during a dance. Unlike dancers in Buenos Aires who seem comfortable playing with gender differences, tango dancers in Amsterdam tend to be uneasy with their tango personas when they seem to be at odds with their identities as ‘emancipated,’ late modern individuals.

How do you look at the interplay between “passionate encounter” and “differences” during tango dancing?

The passionate encounter that tango can produce involves two people entering a space which feels totally intimate: you breathe together, you feel each other’s heart beating, you ‘know’ what the other person feels and wants without having to say a word. While you can dance with your lover, your spouse, or someone you know or care about, many dancers admit that this is not how they want to dance or, at least, not all the time. In fact, there is something particularly exciting about entering the intimate space of a tango with someone you don’t know or couldn’t even imagine having to deal with in your everyday life. Actually, you can often see unlikely combinations of dance partners on the dance floor: dancers of different generations, ethnicities and social classes, or walks of life, locked in a close embrace that, in their ordinary lives, would be unimaginable.

Why might tango and post-colonial feminist theories be at odds with each other?

It’s pretty obvious why tango might be at odds with feminism. Tango is almost synonymous with feminine subservience and masculine machismo. What feminist worth her salt would advocate that? Just imagine a feminist dancing tango and submitting herself to the gendered hierarchies of men inviting and women waiting to be invited, men leading and women following, not to mention the hyper-heterosexual power-games of seduction which are part and parcel of what goes on in a tango-salon. From a postcolonial feminist perspective, dancing tango is even more problematic because it not only reproduces asymmetrical relations between the sexes, it draws upon and exacerbates socio-cultural and -economic divisions between the global North and South. For example, some Argentineans feel forced – often for economic reasons – to offer themselves up as raw material for the desires and fantasies of Europeans and North Americans longing for sexy Latinos who they believe to be ‘closer to their bodies,’ more ‘natural,’ or more in tune with their ‘primitive desires.’ For anyone who is even slightly aware of the role which exoticism has historically played in imperialism and colonialism, a passion for tango cannot be considered simply as a harmless and innocent pastime.

What is your take on reconciling this conflict?

I actually don’t think this conflict can be reconciled, but rather needs to be analyzed in a more grounded fashion. The postcolonial feminist critique of tango is important because it places the dance and the global dance culture it has spawned in a broader geopolitical context. However, as it is the case with any critique that is primarily top-down, the postcolonial critique does not do justice to the experiences of men and women who actually dance tango, both inside and outside Buenos Aires. Nor does it take into account how tango dancers from different locations actually negotiate and manage the contradictions they encounter through their desire to dance with one another. I think we need to pay much more attention to tango as a transnational cultural space that allows a passionate encounter, full of both possibilities and problems, across many different kinds of borders.

Any thoughts on dancing tango in the United States?

Tango is, of course, not only danced in Buenos Aires and Amsterdam. As a global dance, it has produced avid dance communities all over the world, including in most cities in the US. While most of these communities take on many of the features associated with tango dancing in Buenos Aires, US tango communities have their own specific features, depending on the place and the people who attend the tango salons. For example, in New York, where there are many immigrants from different parts of South America, the dance community is much more ethnically diverse than, say, in Cleveland or Milwaukee. And, unsurprisingly, San Francisco, with its vibrant LGBT community, has become internationally famous as a center for queer tango.

Kathy Davis is Senior Research Fellow in the Sociology Department of the VU University in Amsterdam in the Netherlands. She is the author of Dancing Tango: Passionate Encounters in a Globalizing World (NYU Press, 2015).