Effective Messaging can Save Lives. Here is how to talk with the Public about COVID-19

We are fear researchers, and since 2014, we have been taking a deep dive into America’s psyche with our annual Chapman Survey of American Fears. What we have learned could save lives now.  Public officials, from county health departments to governors, are appealing to the public to take measures to protect themselves from COVID-19 and slow the rate of infection. Telling the public to take these measures or risk death is a terrifying message. When confronted with fear-invoking information, humans respond in one of two ways. First, people might try to control the very uncomfortable feeling of the fear itself. Scholars call this fear control. When this occurs, people do not move on to taking protective action, they just convince themselves that it cannot happen to them, or if it does, it will not be very severe. However, the second response, and the one we urgently need, is danger control. This is when individuals respond to fear messages by taking appropriate action to make themselves safer.

We studied fear of disasters ranging from hurricanes to pandemics and the key factors that motivate protective action in the context of preparing for these catastrophes. The key to motivating behavioral change, which in the present case means compliance with stay at home orders and other recommended actions, is provoking danger control, rather than fear control. There are four factors that are essential to flipping this switch. When individuals believe they are susceptible, that the situation is serious, that they can do something to help themselves and that the actions they take are effective, they are more likely to comply with recommendations.

Since the outbreak began, the public has received mixed messages about all four of these. It is costing lives.  Some public officials downplayed the severity of the situation, such as Oklahoma Governor Kevin Stitt and Oklahoma City Mayor David Holt, who posted photos of themselves dining at crowded restaurants even as health experts begged the public to practice social distancing. Media outlets such as OAN spun conspiracy theories, and Fox News sent a message that the coronavirus was merely a hoax, meant to damage President Trump. On Fox, Hannity told viewers, “This is scaring the living hell out of people — I see it, again, as like, let’s bludgeon Trump with this new hoax.” Even more alarmingly, he downplayed the risks of the virus to anyone except the very old or those with underlying conditions. He was not the only one to spread the word that young people do not have to fear contracting the disease. Even Elon Musk tweeted out that kids are “essentially immune.”  Many young people received this message that they were not susceptible to the disease and packed beaches for spring break, risking infection themselves and the possibility of spreading the disease widely after returning to their hometowns. Indeed, there is some evidence that this has already happened.

There have also been missed opportunities for effective fear appeals that emphasize self-efficacy and response-efficacy. When NBC news reporter Peter Alexander asked, “What do you say to Americans who are scared?” President Trump attacked the questioner, “I say that you are a terrible reporter…that’s a nasty question.”  Instead of chiding the reporter, he should have acknowledged the public’s fear, and that every American is susceptible. He should underscore at every turn that the situation should be taken seriously, along with providing concrete measures that a fearful public can do to help themselves and their communities. He should also clearly describe why these measures will be effective.  This type of messaging actually reduces maladaptive responses (fear control) and increases the likelihood of danger control—which is exactly what we need most.

Leaders need to communicate with the public about the importance of staying home, social distancing, hand washing and other self-protective measures. It is vital that the message emphasize susceptibility, severity and most importantly self-efficacy and response-efficacy. Without these components, the message is likely to cause fear, but without action. Failure to take action has fatal consequences. 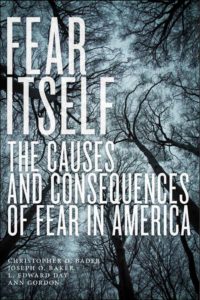 , L. Edward Day, and Ann Gordon are researchers at Chapman University and Joseph O. Baker is at East Tennessee State University. They are the co-authors of Fear Itself: The Causes and Consequences of Fear in America, available from NYU Press.

Feature image by pasja1000 on Pixabay