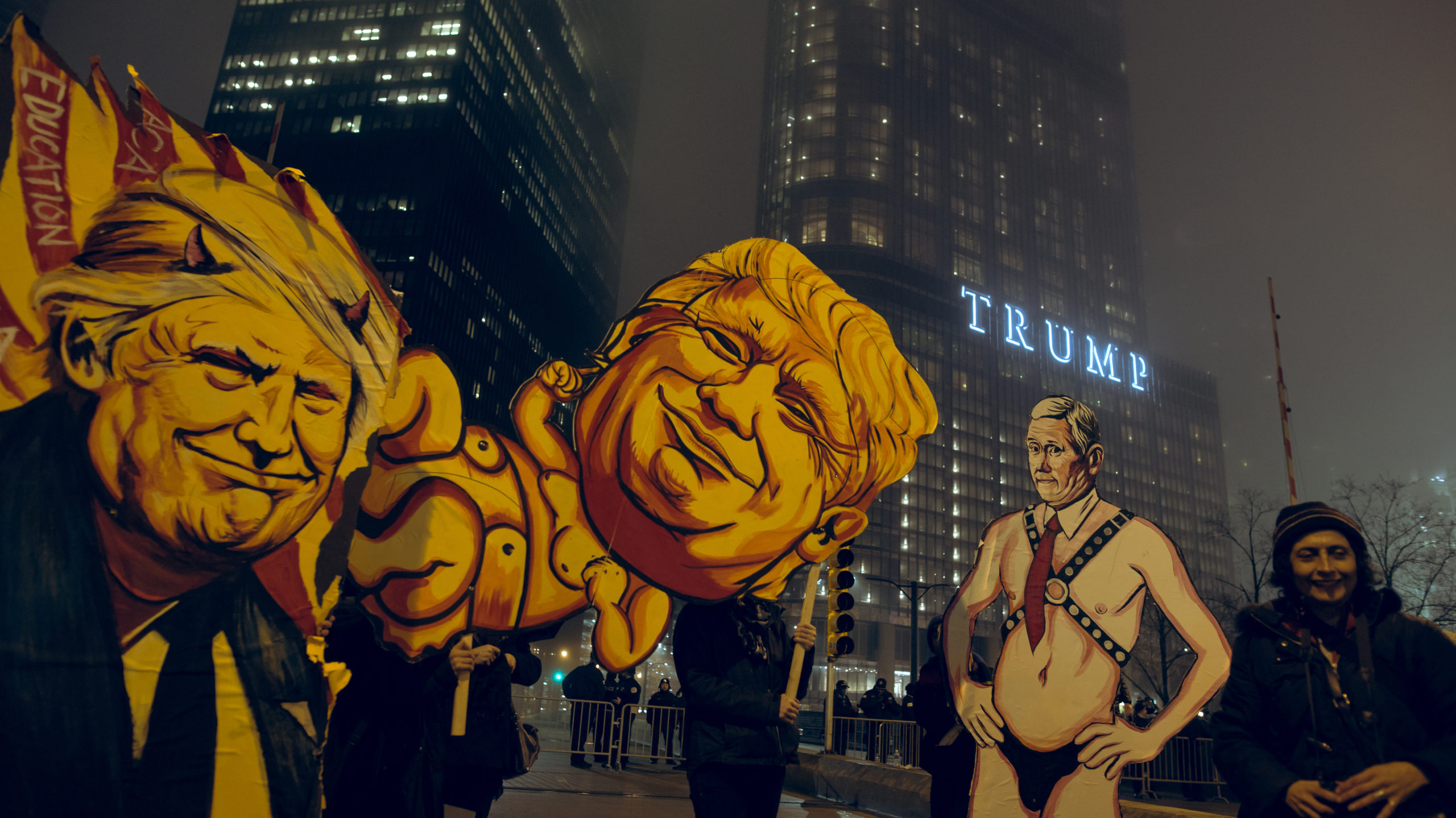 Throughout the western world, public culture is in a state of serious turmoil. Nationalism and right-wing populism are on the rise, and perhaps nowhere have political fissures and antagonisms become more apparent than in the United States, with the election of Donald Trump as President.

In opposition to Trump’s ad hoc and authoritarian politics, a wide range of protest tactics are being deployed across the US and around the world.  The day after his inauguration saw marches in Washington, DC, and hundreds of locations spanning all seven continents.  Many protestors wore hot pink “pussy hats,” knitted or sewn as part of Pussy Hat Project: a defiant sartorial reclamation of Trump’s offensive and sexist “grab them by the pussy” remark.

In addition to the upswell of marches and demonstrations, grassroots political organizing efforts, and campaigns to inundate congressional offices with phone calls, emails, text-faxes, letters and postcards, the last four months have also seen a surge in creative forms of resistance known as “culture jamming.” First coined in the 1980s, culture jamming referred to a range of artful tactics deployed to critique, subvert, and “jam” the workings of consumer culture.  Early versions of culture jamming included billboard alterations, media hoaxes, and ad parodies like Adbusters’ “Joe Chemo,” a sickly version of the cigarette hawking cartoon Joe Camel, laid out in a hospital bed.

Over the past few decades, culture jamming has adapted to evolving communication technologies and expanded to address a wide range of social and political causes … including resisting Trump.

A key feature of culture jamming is that it appropriates existing cultural material—an image, a phrase, a space—and artfully modifies it, turning it into something resistant or subversive.  Culture jamming also tends to be participatory, inviting spectators at home and in the streets to engage creatively in the protest.  As we explain in greater depth in the introduction to our book, culture jamming is artful, often playful, political, transgressive, typically anonymous, and tends to operate serially, as a spreadable and repeatable series of related actions.  In the same tradition as parody, satire, trickster tales, and carnival, culture jamming can be a potent tool for responding to neoliberal shock politics and for speaking truth to power.

Take, for instance, the series “Making America Misogynistic Again.”  A Syrian artist working under the pseudonym “Saint Hoax” recently created a set of arresting images by modifying sexist product advertisements from the 1950s by replacing the taglines with quotations from Donald Trump:

Shepherd Fairey, the street artist who designed the iconic Obama “HOPE” poster in 2008, partnered with other artists to create the “We the People” series, another instance of visual protest against Trump’s divisive rhetoric:

The social media platform Twitter, Trump’s bullhorn of choice, has been a lively site of resistance as well.  The @MatureTrumpTwts account translates Trump’s communiqués into messaging that is more measured, informed, and presidential than that blurted by @realDonaldTrump.  Another parody account, @donaeldunready, tweets as though Trump is a crazed medieval king.  On a more serious and scientific note, as Trump took office, the new administration scrubbed information about global warming from the whitehouse.gov website and instructed federal employees to stop disseminating climate science; in response, a few National Parks Service Twitter accounts went rogue, defying the presidential mandate.  Anonymous staff then opened several “alt” Twitter accounts, including @AltUSNatParkService and @TheAltNASA.

Spinning off the National Park Service’s Twitter jam, this visual meme merges forest protector Smokey the Bear with the rallying cry to “RESIST” Trumpism, the powerful polysemic raised fist gesture (most associated in the US with Black Power), and the flaming torch of the Statue of Liberty:

Humorists around the world are also getting into the act of jamming the new president.  After Trump’s “America First” Inaugural Address, a Dutch satire show created this video, narrated by a Trump sound-alike offering a virtual tour of the country, and concluding, “We totally understand it’s going to be America first.  But can we just say, the Netherlands second?”

These and other creative interventions, and new ones emerging every week, constitute an artful supplement to grassroots political organizing.  While culture jamming is not a panacea, it does have value, especially as a nimble, playful, participatory response to the authoritarian rhetoric and blatant deception of the Trump Administration.

Marilyn DeLaure is an Associate Professor of Communication Studies at the University of San Francisco.  She has published essays on dance, civil rights rhetoric, and environmental activism.

Moritz Fink is a media scholar and author. He holds a doctoral degree in American Studies from the University of Munich.