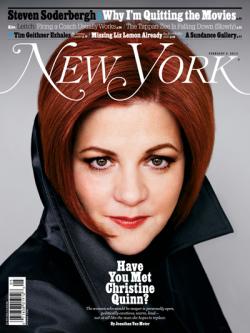 The image female candidates promote is so delicate that revealing an eating disorder, or time in a rehab facility, could put the candidate’s front-runner status in jeopardy– more so than ties to the current establishment or a very public vote switch. Contrast this to Quinn’s chief rival for the Democratic nomination, Anthony Weiner…yes, that Anthony Weiner, of Twitter fame.

The differential treatment of women and men in politics could not clearly be more spelled out. She needs to make herself more relatable, so people will like her more.  She may have gone too far by divulging she had an eating disorder and a problem with alcohol before she was a public official. He does not appear to care what people think of him (I think that is a safe assumption, given his past tweeting behavior), nor do his past scandals while in office appear to affect his political future. And we don’t even know if his suit was Prada or Dolce & Gabbana.

It would be nice to pin all of this differential treatment on the media, but social science studies demonstrate voters judge female candidates more harshly than male candidates for the same behavior. What does all this mean for women with political ambitions? How can they overcome biases against women, both in the media and in the public’s perception of them?

Outside the United States, female candidates do not receive the same treatment—perhaps the results of elections that are more party-centered and less candidate centered. (Margaret Thatcher may be the best example of some backlash against strong female leaders.)  Different styles of election undoubtedly play a role, as they do in the electoral prospects of female candidates as well.  In our book, Contagious Representation, Frank Thames and I show how proportional representation (as opposed to single-member districts seen in the U.S.) fosters women’s participation.  But it is also possible that gender quotas, also found outside the United States, play a role here as well. Would we really focus so much on a single woman acting to represent women, or on what she was wearing, or how relatable she is if there were more than one woman in the race?

Margaret S. Williams is the co-author (with Frank C. Thames) of Contagious Representation: Women’s Political Representation in Democracies around the World (NYU Press, 2013).