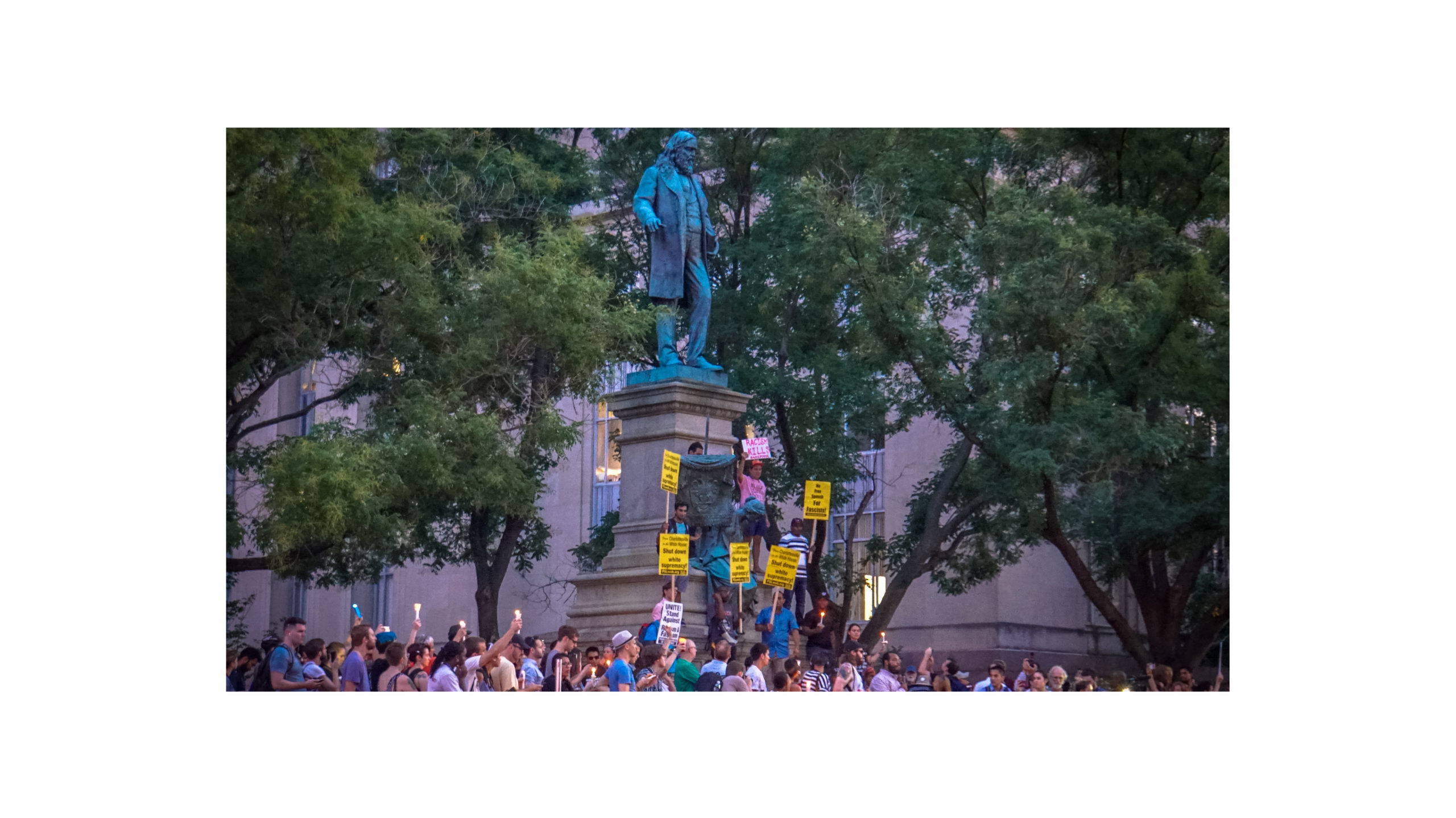 This past Friday, hundreds of Nazis, Nazi sympathizers, and other white supremacist groups descended upon Charlottesville, Virginia and the University of Virginia campus. By Saturday, dozens lay injured and one person, Heather Heyer, lay dead. The violence of the white supremacists shook many across the nation to their core, and drew condemnation from members of both political parties. Many waited anxiously for President Donald Trump to weigh in.

On August 12th, Trump issued his first formal statement declaring the injuries and death were the result of “violence on many sides.” Following sharp rebuke for his unwillingness to call out the white supremacist groups by name responsible for the carnage, Trump held a press conference two days later in which, reading from a teleprompter, he declared, “Racism is evil…including the KKK.” Trump took no questions from reporters following his reading.

Yet, the next day following an announcement of his administration’s executive order on our nation’s infrastructure, Trump fielded questions on Charlottesville from the White House press corps. Off script and away from the safety of a rehearsed written statement, Trump quickly devolved into a defender of white supremacy and its cause. Trump reiterated “there’s blame on both sides” (there’s not), declared that among the white supremacists were “very fine people” (there weren’t), and without prompt asserted that the removal of monuments to the Confederacy is the erasure of history and culture (it isn’t).

Trump’s comments, coupled with his administration’s recent actions to investigate colleges and universities for discriminating against white applicants, and a proposal to cut immigration levels by 50 percent over the next ten years, indicate an important historical shift in American racial politics—the end of dog whistles, and the full-on endorsement of white supremacy as a political platform. So how did we get here?

You start out in 1954 by saying, “Nigger, nigger, nigger.” By 1968 you can’t say “nigger”—that hurts you, backfires. So you say stuff like, uh, forced busing, states’ rights, and all that stuff, and you’re getting so abstract. Now, you’re talking about cutting taxes, and all these things you’re talking about are totally economic things and a byproduct of them is, blacks get hurt worse than whites.…

The abstractions Atwater refers to are dog whistles—coded appeals toward white anxiety and racial resentment. While the origins of dog whistles are a matter of academic debate, their effect on American politics is a matter of fact. Since the 1960s, euphemisms like ‘law and order’, ‘states’ rights’, ‘tough on crime’, and ‘border security’ have become ubiquitous within political campaigns. Candidates in both major parties use them gratuitously to heighten whites’ concerns over a whole host of issues including immigration, affirmative action, and electoral participation.

Though dog whistles have been the political modus operandi for well over fifty years, the Obama presidency saw the reemergence of racial fog horns—loud, abrasive, and direct appeals to white supremacy. The resurgence emanated from nether regions of far-Right online media, and among those who trafficked heaviest in their use was Trump. His 2011 appearance on ABC’s The View, in which he questioned President Obama’s citizenship and thus the legitimacy of his presidency, signaled racial fog horns were once again seeping into mainstream politics. While for many, Trump’s claim appeared conspiratorial, it quickly became a constant headline for Breitbart media, and a consistent talking point on cable television’s Fox News.

Trump’s ascendency to the presidency in 2016 marked the point in which we can no longer deny the normalcy of white supremacy within our political system. His administration firmly and openly embraces white supremacy and coded appeals to white anxiety and amplifiers of white rage are no longer necessary. Inside the White House, Trump has surrounded himself with white nationalist architects and sympathizers. The top law enforcement agent in the country, Attorney General Jeff Sessions, is a man deemed too racist in the Reagan era for an appointment to a federal judgeship. Trump’s chief speech writer, policy adviser, and now-candidate for the empty White House Communications Director position Stephen Miller made his name in the early 2000s as a columnist for Duke University’s student newspaper, where he called the infamous rape allegations against its lacrosse team ‘racial hypocrisy’. Steve Bannon, Trump’s campaign director and now chief strategist in the White House, was a founding member of Breitbart News, and its executive chair until taking over the Trump campaign in 2016. It was Bannon who in 2016 declared Breitbart “the platform for the alt-right.”

Trump’s first six months in office make it clear that politicians and laypersons alike no longer need to hide behind euphemisms to express solidarity with white nationalism. At the same time, white supremacy’s positioning within and around the executive and legislative branches of government make fog horns unnecessary for expressing and mobilizing white rage. The violent demonstration of white nationalists in Charlottesville is evidence of this. White supremacist organizers had planned the march for weeks, yet the city of Charlottesville and the University of Virginia claimed they were unprepared. The casual attitudes by city and public officials toward the demonstrators were on display right up until one of the marchers drove a vehicle into a crowd of counter-demonstrators, killing one person and injuring dozens. When white supremacy is normalized, responses to it mirror its perceived normalcy.

In her exceptionally well-researched and well-written book, White Rage, Emory University professor Carol Anderson makes a compelling argument that white racial backlash is a historical pattern that almost always follows moments of black progress. Certainly, Trump’s electoral college win fits this explanation. Yet, under Trump the politics of white rage are becoming reorganized, and this is leading to a reconsolidation of white racial power. Whereas the era of dog whistles may have signaled an ambient level of white rage, ready to burst periodically and in response to certain key events, today’s white rage is so constantly amplified it no longer makes sense to talk about it as rage, or any other set of feelings that fall outside of normal conditions. In the Trump era, white supremacy is no longer a matter of rage. It’s a matter of fact.

James M. Thomas (JT) is Assistant Professor of Sociology at the University of Mississippi. He is the author of three books, and over a dozen peer-reviewed articles and book chapters. His latest book, Are Racists Crazy? (NYU Press, 2016 and coauthored with Sander Gilman), was recently featured in The New Yorker’s “What We’re Reading This Summer” (July 6th, 2017). Follow JT on Twitter @Insurgent_Prof.