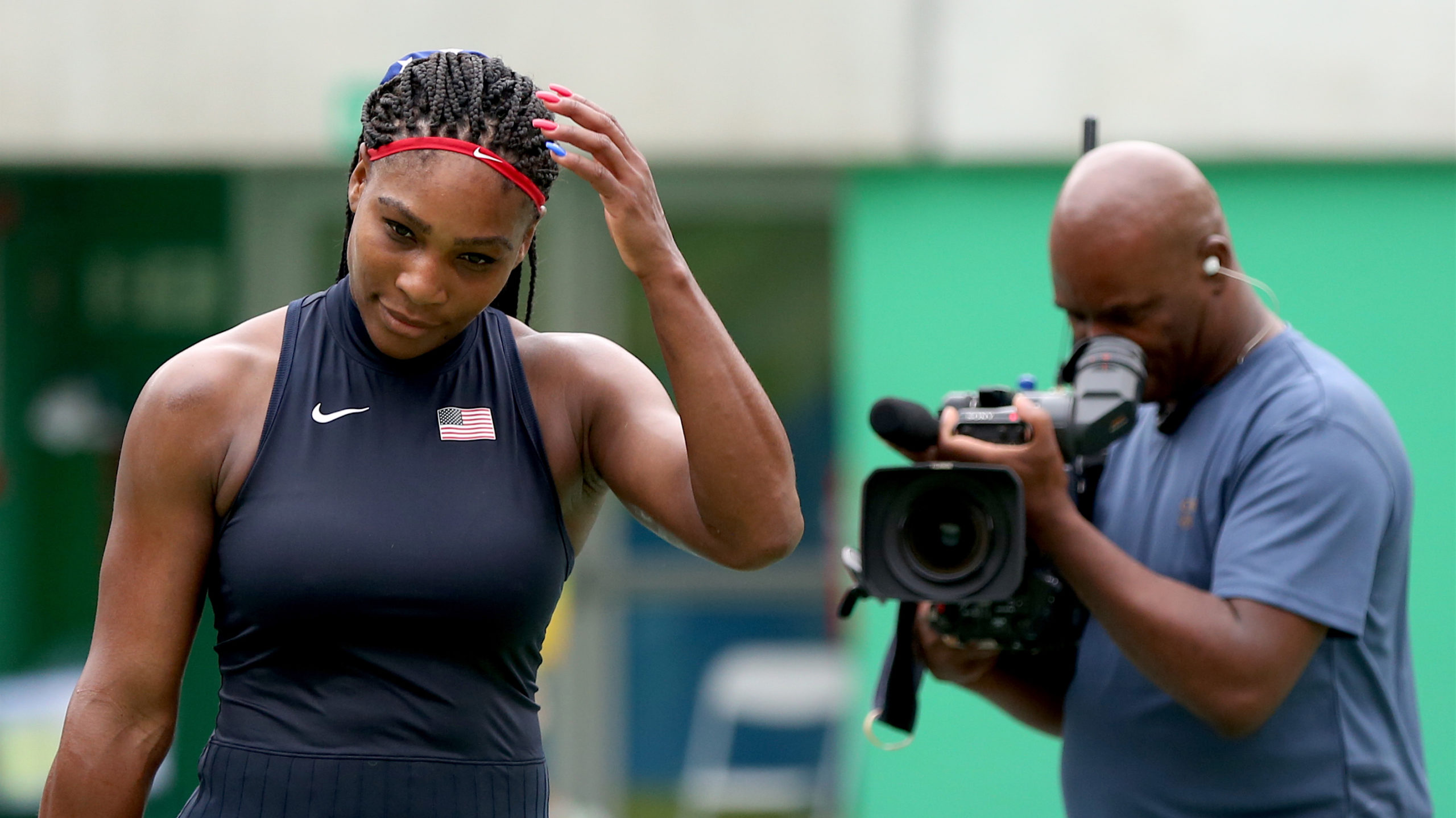 Reddit founder and Serena Williams’s partner Alexis Ohanian succinctly pointed out the double standard between the public acceptance versus the public outcry over our new Supreme Court justice’s anger and Williams’s at the U.S. Open, Tweeting, “it’s not funny, it’s bullshit.” Maybe we can now shift our focus onto precisely why and how Serena was disciplined from emoting while Kavanaugh was lauded for his emotional outbursts. So why, outside of bad tennis calls, might Serena be angry? One possibility: weeks after the 2018 U.S. Open Serena Williams remained the target of a worldwide spewing of racist, misogynistic vitriol. In the latest iteration of what has come to be a decades-long and commonplace occurrence against Serena and her sister Venus, three white male Australian soccer players posed for an end-of-the-season celebration in blackface mockery of the sisters. Clad in bright-white shirts and tennis visors that glowed in stark relief against their shoe-shine-painted-black skin and lopsided wigs, the two men ostensibly representing the Williams sisters smiled gleefully, while the white man in the middle, also in blackface and meant to represent a Kenyan-born soccer player, smirked from his center post.

Anyone who has experienced such an expression of vile racism would want to strike out as publicly as the performance itself, calling out this hatred for precisely what it is. However, a black woman icon such as Serena Williams has to bear the disproportionate burden of not only being the target of such attacks, but also of being above responding to them. In a world that many still identify as postracial, or beyond race and racism, Williams must act tactically, maintain a pose of what I call strategic ambiguity, of neither explicitly identifying nor responding to racism and sexism. Indeed, Serena’s white husband, not her, responded in anger to the racism and sexism thrown at her. The few moments when Williams does respond to inequitable treatment (although she carefully names sexism and not sexism and racism) – such as at the U.S. Open – causes many to unleash their unbridled racism and sexism at her.

This incident comes on the heels of a racist/sexist caricature of Williams by a white Australian cartoonist, an affront flaunted by the Herald Sun newspaper. In that same cartoon, Haitian-Japanese victor Naomi Osaka is erased and replaced with a simpering, white, blonde woman. Osaka’s Blasian identity, in Myra Washington’s words, is spared the crass anti-black racism which strikes out against Williams. The racist attack on Williams also works to hide the feminist sisterhood between Osaka and Williams, denying these women of color any possibility of their shared experiences of sexism and racism.

In addition to these two incidents, in the recent past, Serena Williams’ Australian “fans” have come to her matches blacked up and white women Australian models have happily posed as the Williams sisters in blackface. Blackface, much less anti-black racism, is still a worldwide epidemic.

Social media has caught college students in blackface posing with broad smiles at costume parties in the UK, South Africa, and the U.S.; even in the so-called respectable realm of public school education, a California school board representative (who not only appeared in blackface, but also stuffed her breasts and butt), happily posed during one blackface homage to Serena.

It would, perhaps, be one thing if an icon such as Williams only had to deal with such blatant, (seemingly) old-school forms of starkly horrific and virulent racism. However, as was clear during her inequitable U.S. Open treatment, Williams must also navigate seamlessly through the more coded and commonplace forms of discrimination, not just blackface mockery, but injustices in the game itself: line calls that just happen to not go her way more than her white opponents, and oh yeah, drug testing that she somehow has to endure more than other players. These moments of everyday bias that permeate institutional and interpersonal spaces are microaggressions, a term that psychiatrist Chester Pierce coined in 1970 and psychologist Derald Wing Sue popularized in the past decade.

As the poet Claudia Rankine notes in an earlier essay about Serena’s frustration over bad calls at the 2009 U.S. Open, microaggressions mean that “the rules everyone else gets to play by no longer apply to you.”

Privileged minoritized people (i.e., those of us who occupy positions as “the only” in very white spaces) are hamstrung in our public responses to discrimination. We are damned if we do: if we respond we risk being labelled as oversensitive and perhaps even “racist” or “sexist,” despite the fact that we are calling out racism or sexism.  We are damned if we don’t: if we don’t respond our silence implies agreement or acceptance of the very insults thrown at us.

As a black woman icon, Williams’ very brand comes about through a postracial resistance formed by strategic ambiguity. Her official fashion line deploys a speak-out message of sisterhood (but not feminism) (#BeSeenBeHeard) where “every woman’s success should be an inspiration to another” as “we’re strongest when we cheer each other on.” Any commentary on racial difference remains invisible in this line, while strong-bodied, models of color visually represent Serena’s brand. Due to race and gender bias, Serena faces stiflingly narrow parameters within which she can speak out and speak up for herself.

Any action to speak to the racism and sexism she’s experienced will likely prompt the media – traditional or social – to label her as an Angry Black Woman. She will be parodied; she will be mocked through blackface.

Serena Williams is not alone in having to navigate very public forms of explicit and implicit racism and sexism specific to Black women, or what feminist theorist Moya Bailey calls misogynoir. The media excoriated Michelle Obama as “bitter” in the 2008 presidential campaign for failing to perform patriotism vigorously enough.  Other media labelled self-described “racially transcendent” Oprah Winfrey as  racially touchy because she demanded equal treatment in a high-end store. Media mocked Shonda Rhimes as an Angry Black Woman because she produced not one but two shows with Black women leads.

In each of these cases the icons responded with different forms of strategically ambiguous resistance: they didn’t directly call out the racism and sexism directed at them, but rather addressed the issues in both verbal and nonverbal code.

In the case of our former first lady, her team performed an image makeover to divert the country’s racism, and after a period of being cloistered, Obama came out on The View as a glamour goddess and “mom-in-chief”. Utilizing the tools of strategic ambiguity– not explicitly calling out her experiences of racism or sexism – Obama shaped the media narrative. Michelle Obama scored high popularity ratings throughout the Obama presidency, besting recent first ladies Hillary Clinton and Nancy Reagan. For iconic figures, strategic ambiguity can be a powerful tool to sublimate mass racism.

However, as her response to umpire Carlos Ramos’s unfair treatment illustrates, in moments of  stress Serena Williams largely eschews such strategic ambiguity, choosing, instead, to express her dissent directly. And so, her public performance must balance out her speaking-truth-to-power moments in attempts to diffuse the ugly vitriol. An example is her gorgeously shot, dreamily set five-episode HBO docuseries Being Serena. In it Williams foregrounds her crossover appeal, courts her multiple publics, and soothes and smooths fears of difference as an incidental side note. It is textbook strategic ambiguity, the position powerful black women icons are so often pushed into. Talking about Serena, about racism and sexism, and her strategically ambiguous responses to both, allows us to, in, Audre Lorde’s words, understand the many uses of Serena’s anger.

Ralina L. Joseph is Associate Professor of Communication at the University of Washington, Seattle and is also the founding director of the Center for Communication, Difference, and Equity. Ralina’s first book, Transcending Blackness: From the New Millennium Mulatta to the Exceptional Multiracial, came out in 2013. She is the author of Postracial Resistance: Black Women, Media, and the Uses of Strategic Ambiguity (NYU Press, 2018).