Evaluating Police Uses of Force by Seth W. Stoughton, Jeffrey J. Noble and Geoffrey P. Alpert provides a critical understanding and evaluation of police tactics and the use of force.

Police violence has historically played an important role in shaping public attitudes toward the government. Community trust and confidence in policing have been undermined by the perception that officers are using force unnecessarily, too frequently, or in problematic ways. The use of force, or harm suffered by a community as a result of such force, can also serve as a flashpoint, a spark that ignites long-simmering community hostility.

In Evaluating Police Uses of Force, legal scholar Seth W. Stoughton, former deputy chief of police Jeffrey J. Noble, and distinguished criminologist Geoffrey P. Alpert explore a critical but largely overlooked facet of the difficult and controversial issues of police violence and accountability: how does society evaluate use-of-force incidents? By leading readers through answers to this question from four different perspectives—constitutional law, state law, administrative regulation, and community expectations—and by providing critical information about police tactics and force options that are implicated within those frameworks, Evaluating Police Uses of Force helps situate readers within broader conversations about governmental accountability, the role that police play in modern society, and how officers should go about fulfilling their duties.

As public attention turns once again to a high-profile police killing of an unarmed black man, the legal standards that regulate police uses of force are more important than ever. State law is particularly relevant; policing in the United States is a highly localized endeavor, with more than 80 percent of officers working for one of the 99.5 percent of police agencies that are organized at the city, county, or state level.  In Chapter 2 of Evaluating Police Uses of Force, legal scholar Seth Stoughton, police consultant Jeff Noble, and criminologist Geoff Alpert provide an overview of the criminal, civil, and administrative implications of the state laws that govern police violence.  They then provide a detailed explanation of the many different approaches that the states have taken to regulating both less-lethal and deadly force, including the states’ justifications for and restrictions on police uses of force.

Read these free excerpts from Evaluating Police Uses of Force!

Find more information about this book on our website. Use coupon POLICE20 to get 20% off when you buy from nyupress.org and consider checking out our other police-related titles. 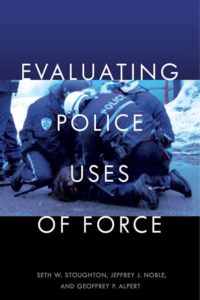 Seth W. Stoughton is Associate Professor at the University of South Carolina School of Law.

Geoffrey P. Alpert is a Professor in the Department of Criminology and Criminal Justice at the University of South Carolina and author of more than twenty books about criminal justice.