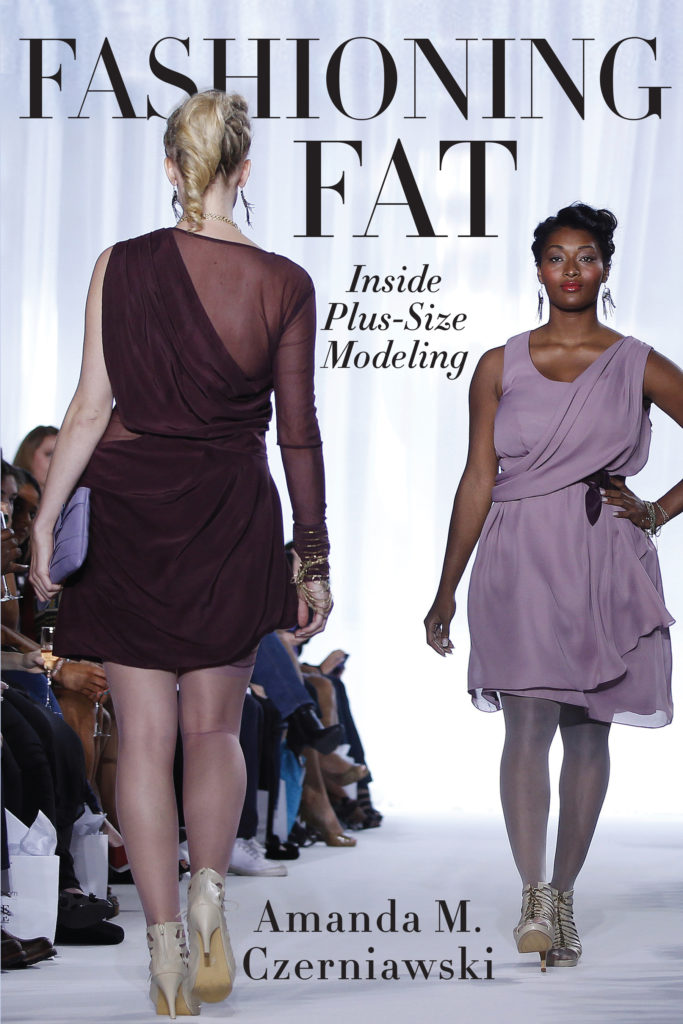 For over two years, sociologist Amanda M. Czerniawski went undercover as a plus-size model to gain insight on how women navigate this sector of the fashion industry—and the impact plus-size models can have on our constructions of beauty. The result is her new book, Fashioning Fat, forthcoming this month from NYU Press. She spoke recently about the intense pressures plus-size models face and how it feels to be “just a body.”

Q: What struck you most when you began your research as an academic entering the fashion world?

Amanda M. Czerniawski: Initially, I thought I had an advantage due to my past experience in the entertainment industry. As a child actor, I entered an audition room with a blazing personality, showing wit and a high social aptitude through conversational banter. So, for my first modeling open call at an agency, I prepared to wow the agent with my purposefully peppy personality. I never got the chance. Before I could even offer simple words of introduction, she told me that she was not interested in representing me. The agent evaluated my potential to model based only on a snapshot, without a word exchanged. I was caught off guard by the impersonal nature of this interaction, as well as the immediate evaluation performed by the agent. With one glance at me, and my pictures, she was done. That was my first glimpse at what it felt to be “just a body.”

As an academic, you would think that I would have learned from this exchange and adjusted my expectations at subsequent calls and castings. Nope. I still waited for my chance to dazzle the next agent with my way with words. At that next opportunity, it happened again (but with different results).

Ultimately, I learned (the hard way) that while acting and modeling are alike in terms of the need to transform yourself into a character for the camera, different skills are used to achieve this goal. In acting, I used my body and voice. In modeling, I was voiceless. You can imagine how difficult this could be for an academic.

How is the concept of being “fat” in the model industry different from our everyday experience?

Fashion often has strict and often extreme bodily standards. For example, in 2009, designer label Ralph Lauren fired model Filippa Hamilton for being too fat. At the time, Hamilton wore a woman’s size four. While the casual observer viewed her as thin, a fashion professional argued that she was fat. This case and others reveal the range of meanings associated with “fat” in fashion. Many of today’s plus-size models do not conform to typical cultural representations of fat. They are “average” to the ordinary consumer, but, in sharp contrast, they are “plus size” to the fashion industry.

For what reasons do women become plus-sized models?

I found that there are four types of plus-size models: the former straight-size model, the performer, the outsider, and the self-promoter. In the first type, a traditional, straight-size model turns to plus-size modeling after failing to maintain a thin physique. In the second, an actor or singer happens to book a modeling job and then continues with it. In the third, a woman, without prior knowledge or interest, is encouraged to model by someone connected to the fashion industry and is then intrigued (and flattered) enough to try it out. In the fourth, a woman tries her luck at modeling without the aid of a network connection. The majority of the models were of the third type.

For many of the women, modeling was thought to be an unattainable dream. Many never imagined that they could work as models because of their culturally maligned bodies. Given the normative expectation of fashion models as young, tall, and thin, it is no wonder that these women had trouble envisioning a place for themselves in fashion. For these women, modeling became a journey of personal growth where they overcame their body issues. Once they discovered plus-size modeling, they began to see their bodies in a different light, often embracing the mantle of spokesmodel for body acceptance.

While sometimes praised as brave heroines, plus-sized models often face the challenge of marginalization and fetishization. How do they cope with this paradox? 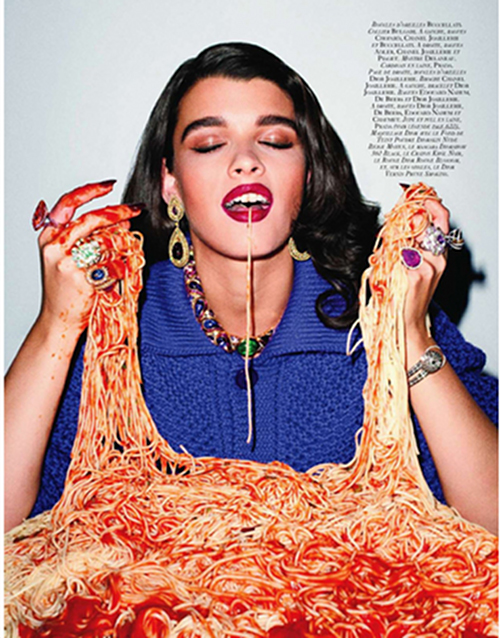 Often the images of plus-size models fetishize the fat body or they are relegated to a special “curvy” issue as a sales marketing feature. For example, a top plus-size model, Crystal Renn, was the subject in an editorial spread by photographer Terry Richardson for Vogue Paris in 2010. The series of images depict Crystal feasting away at platters full of bloody meats, squid, chicken, piles of spaghetti, an abundance of grapes, and a massive wedge of cheese. I also spoke to models who admitted to appearing in weight-loss ads as the “before” image or modeled maternity wear when not pregnant. These kinds of jobs can be taxing on a model’s psyche. Unfortunately, they do not have the power to set the parameters of their work, so if they want to continue to work, they often submit themselves to these unflattering roles and hope for better jobs in the future.

Besides criticizing the impossible ideal body type created in media, your book also mentions the image manipulation of “plus-sized” women as a marketing strategy. Are you suggesting a problem more complicated than skinny or fat here?

Studies suggest that an increased presence of plus-size models (i.e., larger bodies) in fashion may alleviate the trend of bodily dissatisfaction; however, these plus-size models are not average women. So, the mere presence of these models in the media landscape should not be our only focus and, in fact, may contribute to the persistence of bodily dissatisfaction. Let me explain.

While a plus-size model is, arguably, closer in size to the average woman, her body is still atypical in terms of symmetrical facial features and proportional frame. A fashion expert chose her because she was a standout among the crowd. Then, as a fashion model, she is a blank canvas. A slew of aesthetic professionals—her agent, photographers, stylists, makeup artists, and hair professionals—work on her. On top of that, photographers and image editors manipulate the photos either by airbrushing or photoshopping, a practice exposed in Dove’s Evolution commercial.

The final product that appears in print or the Internet is, ultimately, a carefully constructed fantastical image, i.e., an illusion. These images reveal a fun, flirty, and fashionable woman but hide the active work done by and on the plus-size model. Plus-size models engage in, at times, severe bodily management practices, such as strict calorie restriction to drop a size and even binge eating to gain a size, as well as more routine bodily manipulations, such as applying make-up and hair products, wearing shapewear, and adding body padding to make the body frame more proportional. Which is why, after all this work is done (behind the scenes and hidden from the consumer), a woman may look at this image of a plus-size model and think, “We’re the same size. Why don’t I look half as good as her?” This observer may then continue to experience discontentment with her body because she still does not measure up to fashion’s standards for larger bodies.

What is the most important message in Fashioning Fat for readers?

Plus-size models aim to expand the notion of beauty beyond a size six, but that does not eliminate the engendered problem of disembodiment because these women, no matter their size, are simply bodies. Fashion still judges these women on the basis of their looks. Modeling reduces them to curves and numbers on a tape measure. They are not women but breasts, bums, and hips. After all their intensive aesthetic labor, plus-size models are still objectified, sexualized, and, yes, disembodied.