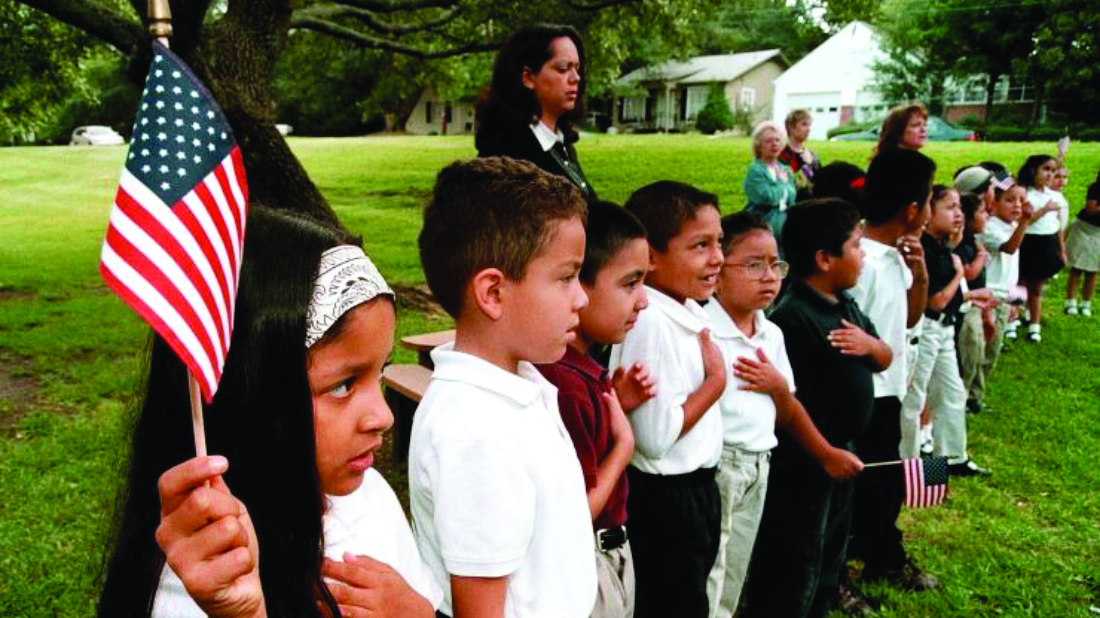 “A Caucasian [teacher] made a comment…‘They should be deported, they have no rights here.’ Then she walks into her classroom with the faces of the very kids whose parents are at jeopardy of being deported and to me I’m like, ‘You don’t have that sensitivity.’ So I talk about [immigration] in class.”
– Claudette Díaz, current third grade teacher in Compton, Los Angeles

In 1994, nearly 60% of California’s voters passed Proposition 187, a ballot initiative that denied social services, health care, and public education to unauthorized individuals. Ultimately, Proposition 187, also known as the Save our State initiative, was found unconstitutional by a federal district court because it promoted racial profiling and would turn teachers into immigration officials.

Laura Simón, a Latina teacher, chronicled the conflicts of that era in her documentary, Fear and Learning at Hoover Elementary. Over 20 years later, however, they continue to afflict immigrant families who enroll their children in U.S. schools, especially in a broader societal context where the remnants of Prop 187 are echoing throughout the nation in the Trump era.

By following the life of Mayra, a young Salvadoran student whose family was directly affected by the policy, Simón highlights the social responsibility she felt to help her student via sanctioned strategies–those allowed by state policies and schools–such as by helping Mayra learn the English language. How Latina teachers deploy a range of sanctioned and unsanctioned strategies in order to protect and help Latino children and their families, some of which are subject to deportation, is a theme in my new book, Latina Teachers: Creating Careers and Guarding Culture.

My research shows that college-educated Latinas are the fastest-growing nonwhite group entering the teaching profession—today they comprise nearly 18 percent of teachers in California, compared to approximately 8% in 1997. They often work in schools embedded in neighborhoods with large immigrant populations and with children who hail from immigrant families.

Latino children, who constitute 20 percent of K–12 schools nationwide, are more than 50 percent of California’s student population. Latinos’ dominance in schools are especially pronounced in Los Angeles. Latinas/os constitute almost 30 percent of teachers, and Latino students now make up nearly two-thirds of the K–12 population. Many of these students are disadvantaged, and 58 percent of Latino youth in Los Angeles have at least one undocumented parent.

My research investigates how and why Latinas—many of whom hail from immigrant families and are the first in their families to attain a college degree—are entering the teaching profession, how they navigate institutions, and how they navigate race relations with teachers, parents, and students in two majority-minority elementary schools located in Compton and Rosemead in Southern California.

I find that Latino youth face significant challenges in schools and that some Latina teachers in Southern California engage in a series of balancing acts in order to aid their Latino students and their families, especially those with undocumented parents, by using unsanctioned and non-institutionalized strategies, and other non-official mechanisms. By non-institutionalized mechanisms, I mean that Latina teachers are highly aware of state regulations and school policies and break the rules to help poor children whom they perceive as having limited opportunities that schools and the larger society are not seeking to expand. To disguise the identities of the Latina teachers and how they bend the rules, I use pseudonyms so that they remain anonymous.

Latina teachers who are in direct daily contact with underprivileged students consciously deploy a range of unsanctioned strategies in order to protect and help children they see as sharing their cultural roots. For instance, one Latina teacher, would protect undocumented Latino parents from social workers and school police by having a family member who was a police officer drive the children home if no one was able to retrieve them on time.

Mrs. Madrigal, a teacher who was born in Mexico and was brought to the U.S. as a child, would pay students in her class to complete odd jobs after school on school grounds at the behest of their immigrant mother after their father was deported, and she was struggling to make ends meet.  Mrs. Madrigal, a fourth-grade teacher I interviewed in Compton explained, “A esa señora ya le llevaron su husband. Trabaja mucho y no le sale mucho dinero. [That mother’s husband was deported. She works a lot but doesn’t earn much.]”

Latina teachers try to secure the well-being of other co-ethnics because they identify with their plight, in part because they hail from immigrant families themselves, because they experience discrimination, and because they remember the effects anti-immigration policies had on their families. On more than one occasion, Latina teachers expressed sympathy for children whose parent(s) were deported while they were in school because they noticed a dip in the students’ school performance.

Mrs. Ybarra, a teacher of Mexican origin, consoled a sobbing child who did not want to return to school because his father had been taken away by telling him, “Mijo, ahora tu tienes que cuidar a tú mamá. Tú eres el hombre de la casa ahora. [Son, you have to take care of your mother. You are the man of the house now.]” Another would help parents fill out immigration forms and help them prepare for their naturalization tests by audio recording the questions and answers in English so they could hear the correct pronunciation.

Similar to other research on Latina/o professionals, Latina teachers give back socially and financially, not just to their families, but also to their students and the families they serve, in order to help mitigate the effects of mass deportation and help them integrate into American society. This, of course, comes at a psychological cost. Latina teachers often overextend themselves, providing services that go beyond what is required of them by schools and their jobs because they themselves experienced social exclusion and want to shield Latino students from similar experiences. The situation is especially racialized for Latina educators because they or their extended families are of the same or similar communities, and they have lived, shared, and witnessed the issues first-hand.

Ultimately, my research demonstrates that schools are not set up to support these students. Often, Latina educators have to fill resource gaps. These kinds of issues will only become more pronounced as the Latino population grows across the United States and as they come under attack in the Trump era.

[This post originally appeared on the Center for the Study of Immigrant Integration’s blog.]

Glenda M. Flores is an Assistant Professor of Chicano/Latino Studies and Sociology at the University of California, Irvine and the author of Latina Teachers: Creating Careers and Guarding Culture (NYU Press, 2017).