Feasting and Fasting offers an expansive look at how Judaism and food have been intertwined, both historically and today. Explore an excerpt from the foreword by Jewish historian Hasia R. Diner to learn more about this fascinating book.

Wherever Jews lived, on whatever continent and in whatever era since ancient times, food defined them. As a people who entered the world with a compendium of sacred texts, the Hebrew Bible and its authoritative interpretations and then the Talmud with its multiple subsequent commentaries and responses to questions, they recognized at a visceral level the importance of food, a topic that never strayed far from their minds.

The first of these works, the Hebrew Bible, known to rabbinic tradition as the written law, might be read as a long origins story that went from food story to food episode as it described how the Jews’ forebears concerned themselves with eating, sacrificing, and dividing the world into the edible and the forbidden. The later rabbinic compilation of the Mishnah and the Gemara, what they called the oral law, provided intricate and exquisite detail as to how Jews should actually conduct their lives and structure their communities in relationship to food. Later works by rabbis and other commentators devoted much time and energy to the task of further elucidating food matters.

More than symbolically, the 1563 code of Jewish law authored by Joseph Karo, considered to be the most authoritative compilation of the many details as to how Jews should live and fulfill their obligations, appeared under the title of the Shulhan Aruch, literally translated as the “set table.” In Karo’s book, Jews everywhere could penetrate the complex web of rules and regulations, the strictures decided by centuries of rabbinic disputation, as to what to do and what not to do, and its author made “the table” the central image that conveyed this knowledge.

Karo’s book, and the many others that both proceeded and followed it, shaped the ways in which Jews and Jewish communities constituted themselves. The Jewish enclave, the kahal, existed in a dazzling array of places for most of history until the modern era as a self-governing entity that could control the lives of its constituents. Often recognized by the larger, non-Jewish state as the sole authority in the lives of the Jews, it could decide who had the requisite credentials to slaughter the animals, sell the meat, bake the Passover matzah, feed the Jewish wayfarers, and provide wine for religious purposes. Food matters, like so many others, lay in the hands of duly recognized rabbinic authorities who could, and did, use their power to discipline the Jews under the jurisdiction. Social pressure in these relatively closed communities also led to punctilious and probably nearly universal acceptance of the system.

While we have no evidence that all Jews at all times and in all places followed the absolute letter of the law when it came to eating, for the most part, we can say that what went on in Jewish communities tended toward conformity. The unselfconscious following of the law as defined by the local religious leaders constituted the norm. Jewish women and men in their homes scrupulously patrolled the pantries and shelves of their kitchens, inspected their chickens for flaws that might render them inedible, turned inside and out the pockets of their clothing before Passover to remove offending crumbs of bread, and when confronted with, for example, the abhorred mixing of meat and dairy, subscribed to purification rituals to render their spoons and pots, forks and dishes usable and newly reborn as kosher.

Yet the long history of the Jews involved much more than law inherited from the distant past. Their food history took much of its complexity from the Jews’ constant migrations, from in and around the Mediterranean basin to Europe, the Americas, parts of Asia, the Antipodes, and elsewhere. Whether they migrated because of persecution and expulsion or if they relocated because of the beckoning of economic opportunities in one newly accessible place or another, they carried with them their sacred texts, religious practices, and their recognition that they were what they ate.

Wherever they went, they confronted three food problems. They had to, as they believed, attend to their dietary laws and continue to conform to this integral part of halakhah, a legal system they knew to be obligatory, yet they also had to deal with the reality that in each new place, they had to create from the ground up new communal structures to provision themselves with acceptable (kosher) food. Additionally, each new place—Spain, Poland, Morocco, Yemen, England, Italy, Germany, North America—exposed them to new ingredients and to previously unknown styles of cooking. In each one of these places, and so many others, they saw, smelled, and often tasted unfamiliar, sometimes tantalizing, novelties. While they lived for the most part exclusively with and among themselves, they met non-Jews in the marketplace and in other settings and thus were exposed to previously unknown foods. How, they asked themselves, could they eat the new good stuff while maintaining their personal and communal commitments to the sacred system? They essentially, in each locale, went through a process of figuring out how to face these three challenges.

While some elements of this conundrum confronted them everywhere, the peculiarities of different time periods mattered much as well. The connections between food and Judaism cannot be understood independent of the tectonic shifts in the social, political, and cultural histories that the Jews lived through. The first four chapters that follow, composing the first of the three parts that constitute this volume, begin by telling this story in a chronological fashion, setting the table (so to speak) for the case studies that constitute the second part and the ethical reflections that constitute the book’s third and final part. Each era provides a particularly dramatic canvas upon which to think about food in Judaism. But the epic transformative impact of modernity, which continues to the present moment, deserves a special mention here, for it most directly shapes the present food-Judaism complex.

Modernity, whenever it began and when it actually struck the Jews and their communities, can be said to have exerted a powerful and disruptive impact on the food-Judaism connection. While historians debate the contours of modernity as well as its timing, all agree that it elevated the individual to a kind of quasi-sacred status. Individuals, especially men, emerged in the modern period as the ones who decided, on their own, how to lead their lives, follow their fortunes as they wanted, and define their values. No longer as restrained by the heavy hand of the past, they could move around the world as possibilities opened up, change their identities, reconsider ethical positions, and participate in institutions and decision-making processes once limited to the elites. Political, religious, moral, and cultural authorities could now be toppled, replaced by those who agreed to respect the “consent of the governed.”

The Jews who lived through the modernization process, as well as the generations of their offspring who experienced other historically specific confrontations between tradition and personal choice, experienced opportunities unavailable to their progenitors. They could decide on their own, variously, where to live and how, how to make a living, what to read, whom to befriend, how to spend leisure time, whom to marry, how—or how not—to be Jewish, and, yes, what to eat.

They, individual Jew by individual Jew, as well as the Jewish communal institutions that they chose to participate in, had to decide how much the inherited Jewish religious food practices they wanted to keep, modify, or reject. How much, they asked themselves, person by person, family by family, did the observance of Jewish dietary law hamper them from accepting the opportunities of modern life, and how much did those traditions represent deep, beautiful, and meaningful connections to the group, its values, and its traditions? How to reconcile them? Why reconcile them? All these questions ran through Jewish communities as women and men decided, debated, and disputed among themselves—and they still run through Jewish communities today.

The subject of food and Judaism has a future that will play out in ways unimaginable to us in the present. It has a deep, rich, complex history that, as the chapters in this book will show, provides much to think about. And it has an open future that will shape Jewish communities and the values those communities embrace in consequential ways. 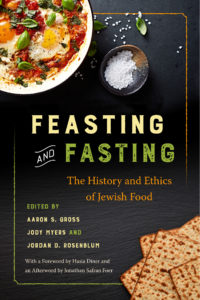