In an article published on Somatosphere this week, author Julie Passanante Elman discusses race, disability, and the volatile teen brain. Read an excerpt from the essay below—and be sure check out more from the website’s series, Inhabitable Worlds.

In February 2014, University of Missouri students made national news when they formed a human wall to protest the Westboro Baptist Church’s presence on their campus. Westboro arrived to denounce Michael Sam, a gay “Mizzou Tiger” who would become the first openly gay NFL player. Mizzou students eagerly donned “Stand with Sam” rainbow buttons and “WE ARE ALL COMOSEXUAL” t-shirts (an homage to “COMO,” or how locals refer to Columbia, MO). The nation turned its collective eye to “The Middle,” a North American region that has been associated (at times, stereotypically, by those on the coasts) with religious conservatism, provincialism, and intolerant attitudes toward cultural difference or sexual non-normativity. Rather than asking “what’s the matter with Kansas?” in frustration, onlookers celebrated Missouri’s anti-homophobic moment of conviction, its investment in creating an “inhabitable world” for queers living outside metronormativity’s coastal enclaves.

While one “Missouri Mike” made his NFL bid, another would never arrive on his campus or attend his first college class. On August 9, 2014 in Ferguson, MO, Michael Brown, an unarmed African-American teenager, was fatally shot by Darren Wilson, a white police officer. His body lay in the street for four hours, as his blood pooled on the asphalt, warmed by the same unyielding Missouri sun that shone on MU’s Francis Quadrangle as students returned in late August. Mizzou students returned to a very different campus. Many of my students were returning from their childhood homes in St. Louis and its neighboring suburbs. Many were from Ferguson. Others were the sons and daughters of St. Louis-area police officers.

In late November, Governor Jay Nixon declared a state of emergency in Ferguson nearly a week before the grand jury decided not to indict Wilson. Politically committed MU students quickly mobilized to support the Ferguson protests. Using the social media handle “MU4Mike,” students organized die-ins in the student center and City Hall and were supported by a variety of faculty, including a Vice Chancellor.

Mizzou’s Facebook page posted photos of the event (including the one above), which incited a variety of hateful responses:

Meanwhile, campus police monitored the MU Gaines/Oldham Black Culture Center after an anonymous threat to the center (“Let’s burn down the black culture center & give them a taste of their own medicine.”) appeared on YikYak, a mobile, anonymous social media application.

Perhaps no image better encapsulates the abruptness with which Mizzou’s political landscape shifted than this screenshot of Mizzou’s Facebook page: 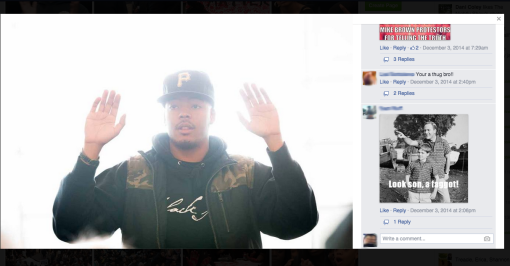 Enveloped in hopeful sunlight, an African-American student stands with his hands raised in peaceful protest. He stands in stark contradistinction to racist comments (“Your [sic] a thug bro!!”) as well as a meme of a white father and son pointing, as if to the man in photo, to proclaim, “Look son, a faggot!” Less than ten months after the campus had “Stood with Sam,” entangled racism and homophobia seemed more virulent than ever.

As an MU faculty member, I wanted to contribute my perspective to this special series—first off—to spotlight our students’ courageous (and ongoing) activism to make Mizzou a more inhabitable world for all of its students. As a critical queer/disability studies scholar contemplating Ferguson, I am thinking of the challenging questions posed by queer/disability activist Eli Clare, who invites us to map the sedimentary layers of injustice.

2 thoughts on “Ferguson, race, and the disability politics of the teen brain”