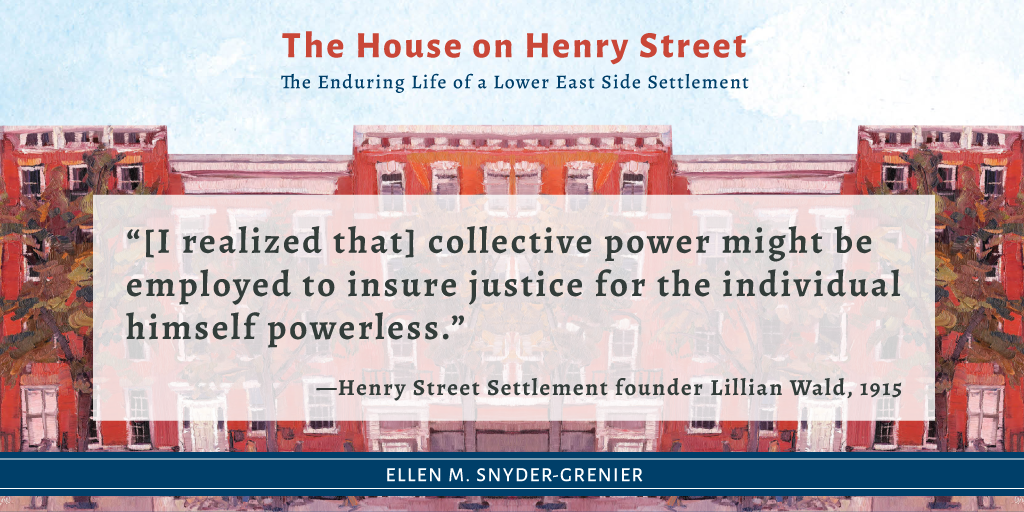 As we celebrate the labor movement this September, Henry Street Settlement’s history is a vivid reminder of why it matters.

On the impoverished immigrant Lower East Side of the late 1800s, Henry Street Settlement founder Lillian Wald observed firsthand the conditions endured by sweatshop workers. Almost half of all newcomers toiled in the needle trades, enduring long hours of repetitive work for meager pay with scant hope of advancement. “The clock in the workshop does not rest,” lamented Morris Rosenfeld in his 1898 poem about a sweatshop. “I work, and work, and work without end…the bitter, bloody work kills the noblest, the most beautiful and the best…ask me not! I know not, I know not, I am a machine!” And Wald witnessed the powerlessness of individuals at a time when employees, most of them not unionized, could be fired at will.

In response, she acted. Known throughout the city for Henry’s Street’s visiting nurse service and robust social welfare efforts, Wald became a lobbyist, a strike supporter, an investigator, and a union organizer. In 1903, she helped form the National Women’s Trade Union League: the first national association dedicated to organizing women workers and an advocate for an eight-hour work day. When disregard for worker safety led to a raging inferno at the Triangle shirtwaist factory in 1911, killing 146, the league led an investigation into factory conditions—helping to establish new safety standards.

The work is, of course, unfinished. For people of color, for example, centuries of systemic racism have led to a host of disparities in wages, benefits, and occupations. Guided by Lillian Wald’s blueprint for social justice, Henry Street has, since it was founded, developed myriad workforce programs to help meet the needs of workers and aspiring workers. Today’s Workforce Development Center is a one-stop location for comprehensive employment services and adult basic education. It is a place to gain job-hunting skills and create a resume, learn English or get a high school equivalency diploma, and find a job or internship.

And, as the Lower East Side reels from massive unemployment spurred by the COVID-19 crisis, Henry Street is continuing to stand up for dislocated workers in its community—particularly immigrants who have lost jobs in New York’s hard-hit hospitality industry. The Settlement is placing workers in jobs in industries that are hiring, such as delivery and maintenance services. “Having a job is a core human need, directly connected to identify, dignity, and mobility,” says David Garza, Henry Street Settlement’s president and CEO. “Whether it comes to housing, health, or quality of life, the ability to earn a living can make the difference between merely surviving and living. But sometimes the toughest rung to ascend on the economic ladder is the first one. At Henry Street we keep our doors wide open for whole spectrum of job seekers and get them the resources they need not only to connect to the ladder but find meaningful opportunities throughout their careers.”