In these tumultuous times, it is imperative for all of us to remember even unprecedented moments can be connected to a past. So, instead of learning history to identify how it repeats itself, we need to learn history to move into a future where it doesn’t. I find myself returning to seminal texts on my bookshelf that inform my antiracism, and I would like to invite you to join me. 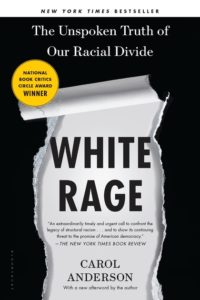 This is a shortened book description from Bloomsbury: From the Civil War to our combustible present, acclaimed historian Carol Anderson reframes our continuing conversation about race, chronicling the powerful forces opposed to black progress in America. As Ferguson, Missouri, erupted in August 2014, and media commentators across the ideological spectrum referred to the angry response of African Americans as “black rage,” historian Carol Anderson wrote a remarkable op-ed in The Washington Post suggesting that this was, instead, “white rage at work. With so much attention on the flames,” she argued, “everyone had ignored the kindling.” Anderson pulls back the veil that has long covered actions made in the name of protecting democracy, fiscal responsibility, or protection against fraud, rendering visible the long lineage of white rage. Compelling and dramatic in the unimpeachable history it relates, White Rage will add an important new dimension to the national conversation about race in America. 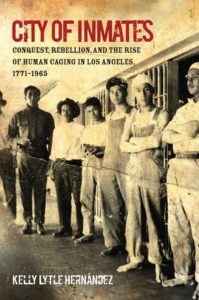 This is a shortened book description from UNC Press: Los Angeles incarcerates more people than any other city in the United States, which imprisons more people than any other nation on Earth. This book explains how the City of Angels became the capital city of the world’s leading incarcerator. Marshaling more than two centuries of evidence, historian Kelly Lytle Hernández unmasks how histories of native elimination, immigrant exclusion, and black disappearance drove the rise of incarceration in Los Angeles. 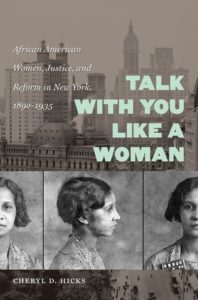 Cheryl Hicks, Talk with You Like a Woman: African American Women, Justice, and Reform in New York, 1890–1935

This is a shortened book description from UNC Press: With this book, Cheryl Hicks brings to light the voices and viewpoints of black working-class women, especially southern migrants, who were the subjects of urban and penal reform in early-twentieth-century New York. Hicks compares the ideals of racial uplift and reform programs of middle-class white and black activists to the experiences and perspectives of those whom they sought to protect and, often, control. Drawing on extensive archival research, Hicks explores the complexities of black working-class women’s lives and illuminates the impact of racism and sexism on early-twentieth-century urban reform and criminal justice initiatives. 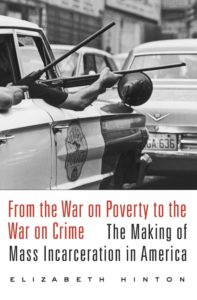 Elizabeth Hinton, From the War on Poverty to the War on Crime: The Making of Mass Incarceration in America

“An extraordinary and important new book.”—Jill Lepore, The New Yorker

This is a shortened book description from Harvard University Press: Challenging the belief that America’s prison problem originated with the Reagan administration’s War on Drugs, Elizabeth Hinton traces the rise of mass incarceration to an ironic source: the social welfare programs of Lyndon Johnson’s Great Society at the height of the civil rights era. Johnson’s War on Poverty policies sought to foster equality and economic opportunity. But these initiatives were also rooted in widely shared assumptions about African Americans’ role in urban disorder, which prompted Johnson to call for a simultaneous War on Crime. By the 1980s, crime control and incarceration dominated national responses to poverty and inequality. The initiatives of that decade were less a sharp departure than the full realization of the punitive transformation of urban policy implemented by Republicans and Democrats alike since the 1960s. 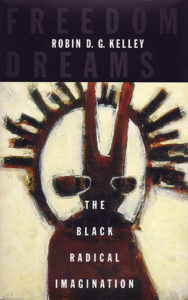 “A bold and provocative celebration of the black radical imagination in the 20th century.”—Laura Ciolkowski, The New York Times Book Review

This is the book description from Beacon Press: [Robin D. G.] Kelley unearths freedom dreams in this exciting history of renegade intellectuals and artists of the African diaspora in the twentieth century. Focusing on the visions of activists from C. L. R. James to Aimé Césaire and Malcolm X, Kelley writes of the hope that Communism offered, the mindscapes of Surrealism, the transformative potential of radical feminism, and of the four-hundred-year-old dream of reparations for slavery and Jim Crow.

Khalil G. Muhammad, The Condemnation of Blackness: Race, Crime, and the Making of Modern Urban America

“[A] brilliant work that tells us how directly the past has formed us.”—Darryl Pinckney, The New York Review of Books

Following the 1890 census, the first to measure the generation of African Americans born after slavery, crime statistics, new migration and immigration trends, and symbolic references to America as the promised land of opportunity were woven into a cautionary tale about the exceptional threat black people posed to modern urban society. Excessive arrest rates and overrepresentation in northern prisons were seen by many whites—liberals and conservatives, northerners and southerners—as indisputable proof of blacks’ inferiority. In the heyday of “separate but equal,” what else but pathology could explain black failure in the “land of opportunity”?The idea of black criminality was crucial to the making of modern urban America, as were African Americans’ own ideas about race and crime. Chronicling the emergence of deeply embedded notions of black people as a dangerous race of criminals by explicit contrast to working-class whites and European immigrants, Khalil Gibran Muhammad reveals the influence such ideas have had on urban development and social policies. 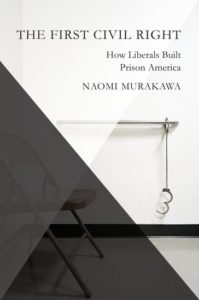 “This brilliant book provides persuasive arguments and powerful analysis of how racial liberals deploy racial pity and ‘neutral’ administrative procedures to entrench images of black criminality and expand the US carceral state. Murakawa stands in the lineage of Angela Davis, Loic Waquant and Michelle Alexander in laying bare the disturbing contradiction between American ideals of criminal justice and American practices of state-sanctioned carceral violence against black people.”—Cornel West

This is a shortened book description from Oxford University Press: In The First Civil Right, Naomi Murakawa inverts the conventional wisdom by arguing that the expansion of the federal carceral state-a system that disproportionately imprisons blacks and Latinos-was, in fact, rooted in the civil-rights liberalism of the 1940s and early 1960s, not in the period after. Murakawa traces the development of the modern American prison system through several presidencies, both Republican and Democrat. Responding to calls to end the lawlessness and violence against blacks at the state and local levels, the Truman administration expanded the scope of what was previously a weak federal system. Later administrations from Johnson to Clinton expanded the federal presence even more. Ironically, these steps laid the groundwork for the creation of the vast penal archipelago that now exists in the United States. What began as a liberal initiative to curb the mob violence and police brutality that had deprived racial minorities of their ‘first civil right-physical safety-eventually evolved into the federal correctional system that now deprives them, in unjustly large numbers, of another important right: freedom. 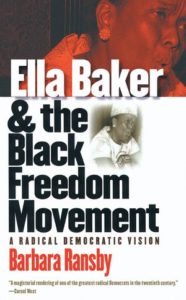 This is a shortened book description from UNC Press: One of the most important African American leaders of the twentieth century and perhaps the most influential woman in the civil rights movement, Ella Baker (1903-1986) was an activist whose remarkable career spanned fifty years and touched thousands of lives. In this deeply researched biography, Barbara Ransby chronicles Baker’s long and rich political career as an organizer, an intellectual, and a teacher, from her early experiences in depression-era Harlem to the civil rights movement of the 1950s and 1960s. Ransby shows Baker to be a complex figure whose radical, democratic worldview, commitment to empowering the black poor, and emphasis on group-centered, grassroots leadership set her apart from most of her political contemporaries. Beyond documenting an extraordinary life, the book paints a vivid picture of the African American fight for justice and its intersections with other progressive struggles worldwide across the twentieth century. 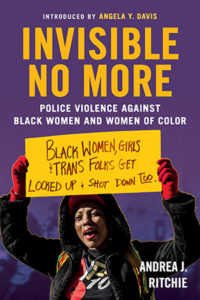 “Invisible No More deserves a standing ovation. It’s a passionate, incisive critique of the many ways in which women and girls of color are systematically erased or marginalized in discussions of police violence. The stories told here will haunt, inspire, and challenge you to reimagine justice by moving the experience of Black women and girls from the margins to the center.”—Michelle Alexander, author of The New Jim Crow

This is the book description from Beacon Press: A timely examination of the ways Black women, Indigenous women, and other women of color are uniquely affected by racial profiling, police brutality, and immigration enforcement. Invisible No More is a timely examination of how Black women, Indigenous women, and women of color experience racial profiling, police brutality, and immigration enforcement. Placing stories of individual women—such as Sandra Bland, Rekia Boyd, Dajerria Becton, Monica Jones, and Mya Hall—in the broader context of the twin epidemics of police violence and mass incarceration, it documents the evolution of movements centering women’s experiences of policing and demands a radical rethinking of our visions of safety—and the means we devote to achieving it. 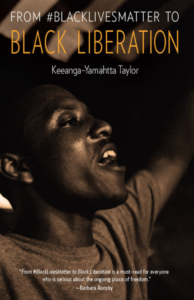 “Keeanga-Yamahtta Taylor’s searching examination of the social, political and economic dimensions of the prevailing racial order offers important context for understanding the necessity of the emerging movement for black liberation.”—Michelle Alexander, author of The New Jim Crow

This is the book description from Haymarket Books: The eruption of mass protests in the wake of the police murders of Michael Brown in Ferguson, Missouri and Eric Garner in New York City have challenged the impunity with which officers of the law carry out violence against Black people and punctured the illusion of a postracial America. The Black Lives Matter movement has awakened a new generation of activists. In this stirring and insightful analysis, activist and scholar Keeanga-Yamahtta Taylor surveys the historical and contemporary ravages of racism and persistence of structural inequality such as mass incarceration and Black unemployment. In this context, she argues that this new struggle against police violence holds the potential to reignite a broader push for Black liberation.

Read a free excerpts below of Carl Suddler’s book Presumed Criminal: Black Youth and the Justice System in Postwar New York which is a startling examination of the deliberate criminalization of black youths from the 1930s to today.

You can now get the eBook of Presumed Criminal for only $15.00!

You can also use the coupon SUDDLER30 at nyupress.org to get 30% off the hardcover!

We’re proud to announce that a paperback edition of Presumed Criminal will be available later this year. 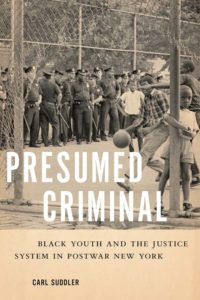 Carl Suddler is an Assistant Professor of History at Emory University. His book Presumed Criminal: Black Youth and the Justice System in Postwar New York is a startling examination of the deliberate criminalization of black youths from the 1930s to today.

“In this powerful, timely, and deeply unsettling recovery of America’s criminal justice past, Suddler shines vital new light on the present. By brilliantly revealing the nation’s postwar effort to deal with troubled young people more humanely, this book forces us to face the extent to which the presumption of black criminality utterly undermined that effort and thereafter ensured that black boys and girls would forever be ensnared in a fundamentally unjust juvenile justice system.”—Heather Ann Thompson, Pulitzer Prize–winning author of Blood in the Water