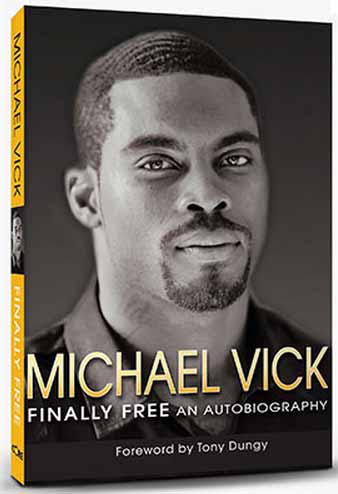 The broadcasting barrage is Vick’s victory lap after a long marathon of brand restoration. If the respectable coverage he has been getting does not prove the once vilified athlete is redeemed and still relevant, advice from the most powerful man in the world adds cogent confirmation. A few weeks ago at a fundraiser, President Obama exhorted Vick to slide more to avoid contact and injury.

Released in 2009 from a 19-month federal prison stay for funding a dogfighting operation, pundits questioned if Vick could overcome almost two years of rust to resurrect his NFL career and restore his tattered brand. That Vick accomplished both feats makes him one of the most intriguing comeback stories in sports history.

Early in his comeback, Vick faced angry mobs of animal activists and animal lovers at every turn—all bent upon shaming him, his new team, and the NFL for reinstating him. Nowadays, though, protests against the NFL quarterback are passé. Perhaps his work with the Humane Society has something to do with the waning of public displays of contempt. During Vick’s appearance on his show, Piers Morgan read excerpts of a letter from the Humane Society to demonstrate the irony of support for Vick’s animal rights efforts coming from the same organization that once fought and vilified him. On Pardon the Interruption, guest host Chris Broussard acknowledged how remorseful and open Vick has been in the past three years, and asked him, “Do you ever get tired of saying you’re sorry?” to which Vick replied, “Yeah, that’s why I wrote this book because this is it, this is the final chapter.”

So the title of his memoir Finally Free indicates among other things that Vick is finally putting his obsequious displays of contrition on waivers. In other words, the repentant athlete is moving on and expects us to do the same. But making a clean break from his past does not necessitate an end to his commitment to animal activism. Vick appears adamant about fulfilling what he perceives as a higher calling to save animals from harm.

We should be curious to see where the culmination of this calling takes him. In a country where animal abuse is as American as Apple iPods, Vick has an array of options. He can continue to reach out to inner-city youth about the perils of dogfighting. Or he might just decide to extend his consciousness-raising activity to poultry processing plants, cattle ranches, and hunting grounds. Vick might call our attention to the inherent dangers in breeding horses for speed, or shame chefs for boiling lobsters to death in restaurants nationwide. Or question the ethical implications of animal shelters killing three to four million dogs and cats each year (a far cry from the eight dogs Vick euthanized during his dogfighting days). We may even one day find Vick challenging NFL commissioner Roger Goodell to use synthetic replacements for the cow fragments manufacturers currently use to make footballs.

No doubt, many would find the above activist projects a tad excessive. For it is one thing for Vick to enlighten sulky street kids not to mistreat man’s best friend, but a whole different animal (so-to-speak) to confront Americans about the sinister ways we condone systemic forms of animal maltreatment. But Vick would be well within his rights to question multiple contexts of abuse. Whether such abuse is entailed in devising canine death matches in dark alleys, discovering scientific breakthroughs, or designing leather handbags, Vick’s calling obliges him to question the manifold ways we sacrifice animals for human enhancement.

So to all you sanctimonious sapiens who threw stones at Vick for past crimes against canines, I hope your glass houses can withstand retaliatory projectiles. The last time I checked, Vick still has a rocket arm.

Shayne Lee is an associate professor of sociology at the University of Houston and author of three books including T.D. Jakes: America’s New Preacher, with NYU Press. Shayne has appeared on Fox, CNN, and ABC and writes op-eds for CNN on topics about religion, sports, politics, and popular culture.