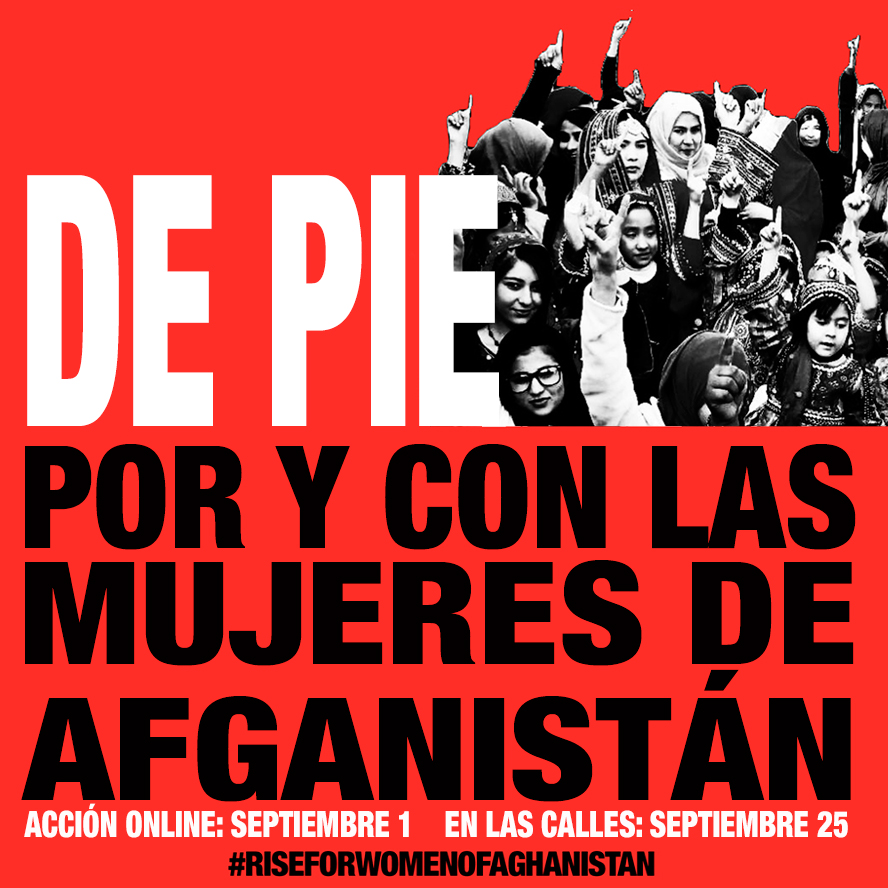 This struggle of Afghan women and the fight against misogyny is hardly new, and yet new developments are happening. Newly mobilized global feminisms may be emerging. If this can happen, it might just save our planet.

Afghan women ask that there be no recognition of the Taliban as a governing body, that borders must be opened to all Afghans needing or wishing to leave, and to recognize the resistance and demands of Afghan women on the ground in Afghanistan.

In response, there are many feminist global networks in place organizing on behalf of Afghan women—for those who want to stay in Afghanistan, those who need to leave, those who need safe-houses, those who are unwilling to be the pawns of political forces who have little concern for their rights, or freedoms, or liberation. This includes the fallen Afghan and US government.

There are at least 2 truths here: the Taliban is a human rights and women’s rights disaster, and the US government has criminalized them for their own imperial purposes. (Let’s pretend to forget that they are now supposedly working together against ISIS for this moment.) So, it is important when criticizing and demonizing the Taliban to not isolate misogyny and sexual violence to them, when it is pervasive in its many iterations across the world.

Somewhat metaphorically, differing forms of the Taliban are everywhere. The US has the Proud Boys and violent anti-abortion fanatics. The Taliban may be more lethal and more constraining to women and girls but the similarities between differing expressions of misogyny are important to recognize.

The US government has manipulated and mobilized anti-Taliban feelings for their own ends but have done so in the name of women’s rights. This means that the recognition of women’s rights is over-identified with the US and the West and manipulated by the US for its own purposes. And yet, Afghan women have their own history and resistance to the Taliban.

The struggle of Afghan women seems all too familiar—20 years too familiar. But something(s) are different, and hold out new promise. First, Afghan women have been demanding and gaining new rights continuously for the last two decades, so it may not be all that easy to abolish them now. And also—the women across the globe have been uniting more and more around reproductive rights for their bodies. The women in Argentina and Poland are formidable. The right-wing macho agendas in India, Brazil, Philippine’s and US have mobilized women on their own behalf.

Put this together with how COVID-19 has created a massive, shared catastrophe for women refugees, women workers, women domestic workers, waitresses, and nurses everywhere from India to Peru to the US and you have a new possibility for anti-imperial, anti-racist, pro-feminist camaraderie. The pandemic is global, affecting women everywhere. When COVID hit, 54 million around the world lost their jobs; most of the 90 percent exited the labor force completely. Women were doing disproportionate amounts of unpaid labor before the pandemic hit, and are definitely doing more of it after.

After four decades of feminist activism, I deeply believe this is the most unique moment I have been in that can create a new global feminist solidarity. COVID and climate catastrophe exposes all of our similarities, which does not mean that there are not differences of class and nationhood. But this just may be a crucial moment in building a new revolutionary feminist solidarity that is catalyzed by the defeat of the US in Afghanistan. Maybe the US is finally at its end of empire. And maybe this is the wrong moment to mess with Afghan women, because they and the rest of us across the planet are ready to fight back.

Women—trans, gender variant, queer, and non-binary—across the globe are mobilizing their support for Afghan women. As Afghanistan and especially Afghan women face the dire and complex forces of the Taliban, climate crisis and drought, a failing economy due to years of imperial wars, women across the globe commit to be comrades in the struggle for our full rights and liberation. Women account for almost 70 percent of the world’s refugees, suffering disproportionate houselessness, statelessness, and hunger. We will face these catastrophes together across our borders.

Since the Taliban marched into Kabul, women’s organizations have been speaking out on behalf of Afghan women.  All of these groups stand in favor of women’s rights and most are anti-imperial and anti-racist. One Billion Rising, a global network of women (cisgender, transgender, and those who hold fluid identities that are subject to gender-based violence), exists in more than 200 countries, and continuously organizes against sexual violence with an understanding of women’s oppression and exploitation in the context of capitalism, colonization, racism, imperialism, environmental plunder and war.

OBR, at the request of its grassroots activists, has gathered a plethora of women’s groups across the globe to support Afghan women from near and afar. Their on-line global action began on September 1st, launching efforts for Afghan women throughout the next month.

The similarity, not the sameness, allows for a huge global camaraderie and solidarity. It is this very visioning/imagining that is so dangerous to patriarchal control and misogynist privilege: if I see some version of myself when I see you, I am so much less likely to Otherize you, colonize you, not see you.

Seeing each other through the power filters of oppression and its racist practices is a first step at coalescing the power of women—bi, trans, non-binary, cis—as women, sharing the oppression of being born female. Acting with and for Afghan women creates the very practice we need to change the lives of all women, each of us, even our own.  It is an act of solidarity for the planet.

Don’t think about camaraderie as though it is about someone else.  Make it about yourself and your connection to others. Create the solidarity. Hope is not an idea; it is a practice. It is the very actions I/we take that give me hope.  If you are hopeless, you are not active enough. The love and connection I feel for those I share with, take risks with, find what I am thinking with, is what fuels me.

Do not be stymied by thinking that you cannot make a difference or have impact. These questions cut off much of the possibility of making a difference.  Do what you do for yourself first—because you have to.  Don’t be an anti-racist wondering if it matters enough. What impact it can have?  Instead, do it because you must; because this makes you who you are and who you want to be, and who you will become.

When we/I act, I am in process of becoming the human I want to be. It is the process not of saying, but actually doing that begins to shift the power. Shifting is good; it is a start. Many starts make a difference. Many starts brought the civil rights movement. They brought #MeToo. Starts need to be recognized as partial and potentially revolutionary.

Do not confuse the feminist anti-Taliban stance with support for the US government and its policies towards Afghanistan. This stance connects to and condemns all sexual violence and harassment in whatever form and whose name practices it. Ours is a humanitarian stance demanding an end to all misogynist limitations on women’s and girls’ lives across the globe.

We are anti-imperial, anti-racist, anti-war, anti-misogynists committed to a peace everywhere that will save us and our planet from climate disaster and its misogynist racist wars.

Zillah Eisenstein is a noted feminist writer and is Professor of Politics at Ithaca College. She is the author of numerous books, includingThe Female Body and the Law (UC Press, 1988), which won the Victoria Schuck Book Prize for the best book on women and politics; Global Obscenities (NYU Press, 1998) and, most recently, Abolitionist Socialist Feminism (Monthly Review Press, 2019).

Photo courtesy of the author.