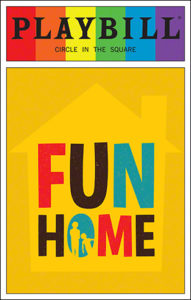 On June 7th, 2015, the musical Fun Home emerged triumphant. It won 5 Tony Awards, including Best Musical, Best Original Score, Best Book of a Musical, Best Lead Actor in a Musical, and Best Direction of a Musical. The significance of these wins cannot be overstated. A musical based on a graphic memoir featuring a lesbian, her gay father, and the rest of the family has been thrust into the purview of mainstream America—and really, who can resist having ALL of the feelings when Sydney Lucas sings “Ring of Keys?” Moreover, Jeanine Tesori and Lisa Kron have made history as the first women to win a Tony for best songwriting team.

It is clear that Fun Home gives people many reasons to be proud, especially in a month when we traditionally celebrate LGBT pride. One of the things that I find most moving about the musical (and the original graphic memoir by Alison Bechdel) is the way it actually subverts traditional narratives of pride and shame based on particular understandings of identity and masochism.

One of the conventional understandings of Pride is that it exists to celebrate triumph over homophobia and prejudice against LGBT people. That this narrative privileges a particular form of progress and has been easier for particular segments of the LGBT population is something that has been written about extensively by other queer studies scholars. In this post, I’m more interested in mentioning the ways that this conventional version of identity politics shores up a particular vision of masochism. One of the main arguments in my book Sensational Flesh: Race, Power, and Masochism is that the framework that we’ve been using to understand the relationship between individuals and power is masochism. In the book that means various things, but in the context of Pride, it has meant reveling in the wounds that produce LGBT identity—triumph would not be possible if there were no obstacle to overcome and the more wounds that are available, the more visible the triumph and the more celebrated the identity/person.

While I am not the first to describe this relationship between identity, woundedness, and masochism, I argue that this narrative frames our understanding of what it is to be an individual so that those with the privilege of appearing wounded are able to do because they are already part of an assumed arc of redemption and celebration while those whose wounds are less affective and more structural in terms of access to resources cannot access this arc in the same way (see last year’s post on Kara Walker as an example).

On the surface, it would appear as though Fun Home could fall easily into this particular trope, but it smartly sidesteps the arc of progress. In her retrospective gaze at her family life and its relationship to her father’s gayness, Alison (the oldest version of the character that we see) doesn’t pity her father or frame his suicide as the effect of a bygone prejudice that she has been fortunate to avoid. The question is not what would have happened to Bruce Bechdel had he lived in an era when he could live freely as a gay man. Neither is the focus on Alison’s ability to come out as a college student and live as a butch because things are better now. The universe of the musical understands these characters as inhabiting different modes of queerness, but it doesn’t ask us to do a comparison (despite the fact that Bruce commits suicide, which would seem to be the ultimate masochistic act).

Instead, the character whose life we imagine might have been different is Bechdel’s mother, Helen, played achingly by Judy Kuhn, whose song near the end of the show, “Days and Days” is a tearjerker —not because she is self-pitying but because she is resigned. This is structural difference at work. She knows that her suffering does not connect to later progress or triumph, but it does not diminish her work or her pain.

Where does this lacuna of feeling lie in a world structured by suffering or triumph, a world where the individual is a masochist in order to receive redemption through pity? Throughout the musical, we see so many moments when the semi-closeted world that Bruce inhabits that his daughter so desperately wants to remember and connect to, is not uniformly sad; there is fun—a dance with a casket, a furtive sighting of a kindred spirit (the butch that Lucas sings so movingly about). In all, it is not a play about moving through masochism to find identity, but about recognizing the many different notes being played at the same time. The arc of identity need not be neat or masochistic (so as to end in triumph), but it makes one feel, and gives reason for finding different narratives of individuality.

Amber Jamilla Musser is Assistant Professor of Women, Gender, and Sexuality Studies at Washington University in St. Louis. She is the author of Sensational Flesh: Race, Power, and Masochism (NYU Press, 2014).

One thought on “‘Fun Home’ and Pride”