Even a feminist/queer critic of marriage (me, alas) can’t help but be moved by today’s decision by the Supreme Court that finally makes marriage equality the law of the land. And coming as this does the day after the Supremes ruled for the Affordable Care Act, putting to rest the Republican obsession with denying Americans health care coverage, all people of good faith (or even simple common sense) should be celebrating. But after the champagne corks are popped and the tears of victory dry, it may be time (long overdue, in my estimation) for the LGBT movement to pivot and recalibrate. The push for marriage rights as signifying all things gay and all things “equal” has taken up too much bandwidth and sucked the air out of the potentially more capacious room of queer world-making. 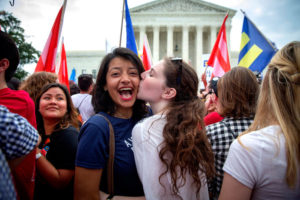 w that the battle is won, how can the movement (or movements more accurately, since the idea of some monolithic “gay movement” is already a problem) re-imagine and re-invent itself? Some moves are already being made, as LGBT activists and organizations have increasingly engaged with broader social justice movements such as “Black Lives Matter,” and other interventions against police brutality and mass incarceration. Surely this work needs to deepen and continue. And the always-frustrating inability for the gay movement to double down on its commitments to core feminist concerns such as sexual freedom, gender violence, and reproductive rights needs to be reckoned with head on. Indeed, as gay marriage triumphed in state after state (and now the Supreme Court), anti-abortion laws and restrictions also barreled ahead, a point Katha Pollitt detailed painfully in a recent piece in The Nation.

There is a danger that this pivot won’t happen, that gay rights organizations and the money that backs them will pat themselves on the back and declare victory over the ills of homophobia, as if one basic right signifies full inclusion and the end of anti-gay animus.

But there is also a danger that the ideology that undergirded much of the marriage movement (that the couple is sacrosanct and “special,” and the only way to raise healthy children; that gays are “born this way” and sexual identity and desire are hardwired so we just can’t help ourselves; that same-sex marriages and parenting as “no different” from heterosexual ones and pose no challenge to heterosexual business as usual) will mitigate against a recalibration that requires a more complex understanding of discrimination and hatred and a more robust vision of inclusion and freedom. In other words, this recalibration must entail a hard look at the problematic arguments (about biology, about family, about gender, about tolerance) that became the common-sense ideology of the marriage movement and, more generally, came to stand in for how “gay rights” have been thought about these past ten years or so.

Celebrate we should – but let us now look back to our more radical liberationist past (a past linked closely with broader concerns over social justice and gender equity) and look forward to a utopian future in which marriage is a basic right, not the brass ring of equality, and the queering of the world does more to rattle the cages than knock discreetly at the chapel door.

Suzanna Danuta Walters, author of The Tolerance Trap: How God, Genes, and Good Intentions are Sabotaging Gay Equality (NYU Press, 2014), is Professor of Sociology and Director of Women’s, Gender, and Sexuality Studies at Northeastern University and Editor-in-Chief of Signs: Journal of Women in Culture and Society.