[Note: An expanded version of this piece was originally posted on Nursing Clio.]

Many Americans could tell you that George Washington was tall and that he had false teeth. Why? Although he is disembodied in national symbols such as the portrait on the one dollar bill and the massive obelisk and the capital city that bear his name, Americans are no strangers to George Washington’s body. The history of representation of his physical body illustrates neatly the ways in which the body informs norms of manhood and how masculinity has long been part of his popular image and even our national identity.

Washington’s earliest portraits highlight his achievements as a military leader. His images express power and confidence, often situated on the battlefield.

In his own lifetime, he dressed that body in the military uniform of the day and portrayed himself as a leader. His detractors similarly focused on his body and put it in a dress to detract from his power. This engraving of Washington was published during the American Revolution and sought to undermine his status.

That same body could speak to the virtuous project of Republican self-governance when positioned in other ways. In the Early Republic his body was portrayed in statue that featured him in a toga, to capture not just physical power but also the virtue associated with Republicanism and the Greco-Roman system of government that relied on virtuous manhood.

In the nineteenth-century popular portraits featured Washington with his wife and her children and grandchildren. The family scenes presented his body in the domestic sphere and situated it next to dependents, celebrating him as a national masculine role-model head-of-household.

At the turn of the twenty first century his body would be the site of curiosity and also anxiety. Mt Vernon launched a forensic examination of Washington to create statues of his youthful self.

His image would also trouble some, however, given a particular feature of nineteenth-century portraits. In 1999, a Georgia school district instructed teaching assistants to erase the image of his watch fob by hand-painting twenty-three hundred fifth-grade textbooks that featured Emmanuel Leutze’s masterpiece, Washington Crossing the Delaware. In another county, they tore the page from thousands of copies of the book. In 2002, several editions of an American history high school textbook that contains the image of Leutze’s nineteenth-century masterpiece were also altered because administrators feared that it would draw attention to this private area of Washington’s body or, worse, might actually appear to be his manhood, exposed. 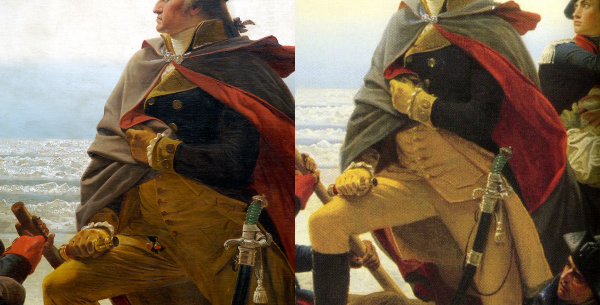 Nearly eroticized depictions of Washington’s body have continued in the new millennium. David Hackett Fischer’s, Washington Crossing, for example, notes Washington’s “muscular legs” in the opening paragraph, and that he, “at forty-two, looked young, lean, and very fit” at the time of his famous crossing of the Delaware River.

Other authors specify that Washington was unusually desirable to those around him. Richard Brookhiser provides the usual description of Washington’s body and explicitly links it to sex appeal: “Women also took note of him,” he writes. About John Trumbull’s 1792 portrait of Washington striking a classical pose after the Battle of Trenton, he claims that it “clearly shows a pair of well-developed thighs.”

The increased emphasis on crafting an appealing body for Washington can be illustrated by comparing one author’s descriptions over time. Twenty-one years after publishing a description that included the phrase “wide across the hips,” John Ferling changed it to “broad shoulders,” “muscular arms,” and “small, flat waist,” with no mention of the wide hips that many associate with femininity. He also emphasized instead that Washington “exhibited the striking look of what we would expect today in a gifted athlete.”

The depictions of such a muscular body are not just about sex appeal. They symbolize character and idealized manhood. Comments about size, appeal, and physical attributes stand on their own and are intended to suggest that somehow nature had endowed him with a physical presence that indicated his superior skills and capabilities and the pivotal role he would play in the founding of the nation. In this way, large hands and big muscles are connected to founding the national government and acting as figure head to a fledgling country.

Washington’s reproductive body has also been the subject of national scrutiny. The father of the nation had no children with his only wife, Martha, and no definitive explanation for this lack. Nonetheless, Americans have generally ruled out impotence. “There is nothing in his behavior,” writes one biographer, “to suggest that he was impotent, or that his sexual nature caused him any deep uneasiness.” Another portrays Washington as a man who was clearly performing his husbandly duty beyond question and claims, without any evidence, that Washington was “mystified why, year after year, he and Martha could produce no Washington heir.”

The assertion that Washington was decidedly not impotent is not just limited to popular biography. In the academic medical journal, Fertility and Sterility, John K. Amory published his conclusion that Washington could not likely have been impotent given what we know about him as a “healthy, vigorous man.” Tellingly, the author also ruled out sexual infertility as the result of a sexually transmitted disease (despite their commonness in eighteenth-century America), noting Washington’s “character and strong sense of moral propriety.”

At their webpage, The American Society for Reproductive Medicine features Dr. Amory’s work which concluded: “Could Washington have had sexual dysfunction? … Erectile dysfunction due to diabetes or vascular disease seems implausible in such a healthy, vigorous man. Inadequate sexual frequency is theoretically possible but unlikely because Washington’s relationship with Martha was intimate, and as a farmer and expert mule breeder he was certainly well aware of the necessary means!”

In the absence of documentation, Americans have conceded that their virile Founding Father may have been infertile but impotence is beyond the pale. Sexualized manhood has long been predicated on the ability to penetrate. On the scale of emasculating sexual deficiencies, sterility ranks slightly lower than impotence.

Satire has poked fun at this American embrace of the super-man Founding Father. The Real Brad Neely’s YouTube video crudely mocks the national emphasis on Washington’s greatness by emphasizing especially his heights and prowess (here giving him multiple “dicks”).

Similarily, a large mural depicting Washington in a dress, featured on the side of a building in Cincinnati, jolts the viewer in part because of his traditional association with American masculinity.

The variety of ways that Americans have thought about George Washington’s body and its militaristic, domestic, and sexual and reproductive capabilities, should not surprise us as we’ve long known that gender and sexuality inform our national identity. That it occurs in our most basic understandings of our most primary national figures serves as a reminder of the influence of gender, sexuality, and the body in our national identity.

Thomas A. Foster is Associate Professor of History at DePaul University in Chicago, and the author of Sex and the Founding Fathers: The American Quest for a Relatable Past (Temple University Press, 2014) and New Men: Manliness in Early America (NYU Press, 2011).