At last week’s debate, Republican presidential candidates Herman Cain and Michele Bachmann defended waterboarding. Cain said, “I don’t see it as torture. I see it as an enhanced interrogation technique,” which is what the Bush administration used to call its policy of torture and abuse. Bachmann declared, “If I were president, I would be willing to use waterboarding. I think it was very effective. It gained information for our country.” And after the debate, Mitt Romney’s aides told CNN that he does not think waterboarding is torture.
President Obama correctly retorted, “Waterboarding is torture.” He added, “Anybody who has actually read about and understands the practice of waterboarding would say that is torture — and that’s not something we do, period.”

George W. Bush, Dick Cheney, and John Yoo have all admitted participating in decisions to waterboard detainees, knowing that interrogators would carry out their orders. Under the doctrine of command responsibility, commanders all the way up the chain of command to the commander-in-chief can be prosecuted for war crimes if they knew or should have known their subordinates would commit them and the commanders did nothing to stop or prevent it. Therefore, Bush, Cheney, and Yoo have admitted to the commission of war crimes.

But by refusing to investigate them for their admitted torture, the Obama administration has given the Bush officials a free pass.

Moreover, Bachmann was wrong when she claimed torture is effective. Former high level FBI interrogators, including Ali Soufan and Dan Coleman, say the person being tortured will say anything to get the torture to stop — even providing false information. The best results, interrogators add, are obtained with humane methods.

Obama also accurately noted that waterboarding “is contrary to America’s tradition, it’s contrary to our ideals. That’s not who we are. That’s not how we operate. We don’t need it in order to prosecute the war on terrorism. We did the right thing by ending that practice. If we want to lead around the world part of our leadership is setting a good example.”

Unfortunately, during his hearing to be confirmed as CIA director, David Petraeus told Congress there might be occasions in which we must return to “enhanced interrogation” to get information. Alarmingly, that comment signaled that the Obama administration may return to the use of torture and abuse. That would be unacceptable.

Marjorie Cohn is editor of The United States and Torture: Interrogation, Incarceration, and Abuse (NYU Press 2011). 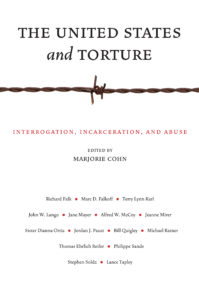 Paperback edition to come in April ’12.
[See original article as it appeared in the Huffington Post here.]