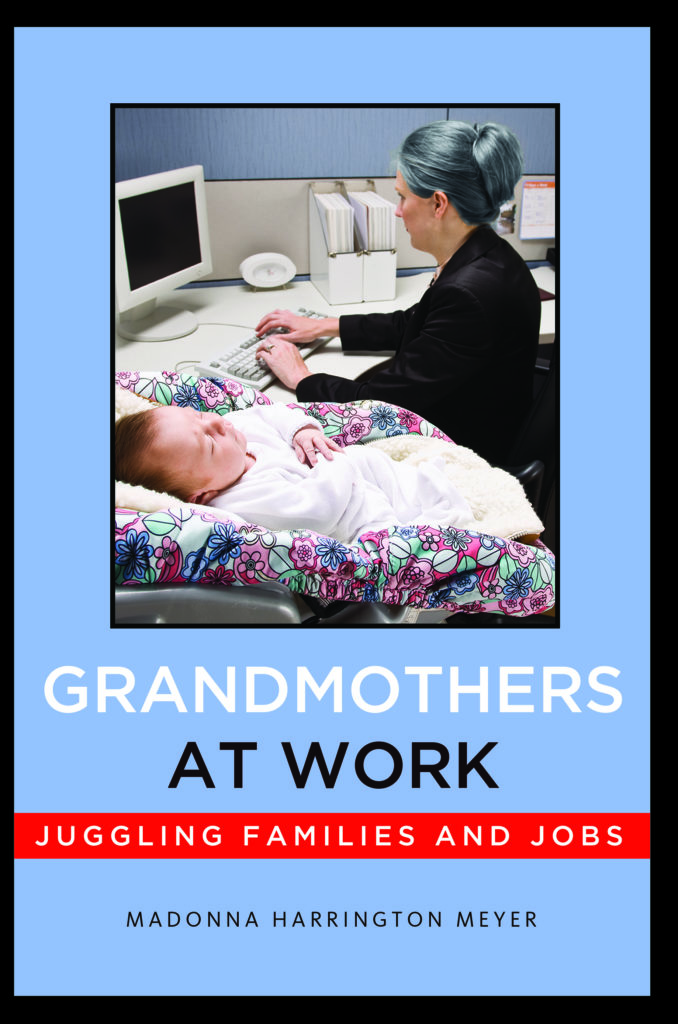 We know that a lot of mothers juggle work and family, but millions of U.S. grandmothers do as well.

In Grandmothers at Work: Juggling Family and Jobs, sociologist Madonna Harrington Meyer chronicles the lives of 48 working grandmothers. We see the joy, and the challenges, these women and their families face in a country where supportive family policies are few. In their own words, grandmothers talk about the strength of family bonds, their hectic schedules, and the extent to which they are diverting their nest eggs, adding new debt, delaying retirement, and foregoing travel and other retirement plans.

In time for Mother’s Day (this Sunday!), we asked Madonna Harrington Meyer, author of Grandmothers at Work, to discuss her research and share stories from her book.

What first prompted you to think about and study working grandmothers?

When my own children were in high school and I was looking forward to an empty nest, I attended a conference at Russell Sage and overheard all of these sociologists who were a few years older than me talking about how much pressure they were under to care for their grandchildren. I knew all about younger mothers juggling work and children; I had not really considered the lives of middle-aged women juggling work and grandchildren. This was a stage I had not seen coming.

What surprised you most in your research?

The joy. To talk to 48 working grandmothers is to talk to 48 women who know joy. No matter how hard it might be to juggle work and grandchild care, no matter how tired, or sick, or impoverished they were feeling, they were also feeling tremendous joy.

Also, I was so pleased by how eloquent the women were. They are a very diverse group with respect to age, race, marital status, and education, and their ways of speaking are very diverse as well. But they are able to express their thoughts with such elegance of words. One woman, describing the rules at her daughter’s house, including no computers and no TVs and complete freedom of self-expression, told me, “These are free range children.”

Is there a particular story or memory during your interviews with these women that stands out for you?

Several stories really touched me. Deanne’s story about her disabled husband, her newly divorced daughter, three mortgages, full time work, and caring for three grandkids most evenings, and visiting her mom in the nursing home, was really powerful. She is devoted to helping her children raise their children even though the financial impact on her and her husband is enormous and leads to a lot of strain in their marriage. They disagree about how much to help.  Meanwhile she has to delay retirement and pay off these three mortgages.

Estelle’s story was also very powerful. She was a no-nonsense grandma, telling her children that they needed to raise their own children. But then her daughter became a single mom and Estelle would work all day and come home to care for her grandson evenings and weekends. She loves him, but she says it has put her in the poor house.  She told me now she will have to work till the end. She told me she will have to die at her desk.

What do you hope readers will learn from your book?

Working grandmothers are very diverse, and their experiences are equally as diverse.  They describe a great deal of joy, and a mix of challenges. This is daily life for millions of U.S. women. The work itself is mainly invisible, and the consequences are mainly invisible. While some have enough resources to take it all in stride, for others working and caring for grandchildren leaves them physically and financially depleted. If the U.S. would offer social programs for families as they do in the EU, federally guaranteed paid sick time, paid vacation time, paid parental leave, universal pre-K, etc., U.S. grandmother could focus more on grand-mothering and less on mothering.

One thought on “Grandmothers on Mother’s Day: Q&A with Madonna Harrington Meyer”