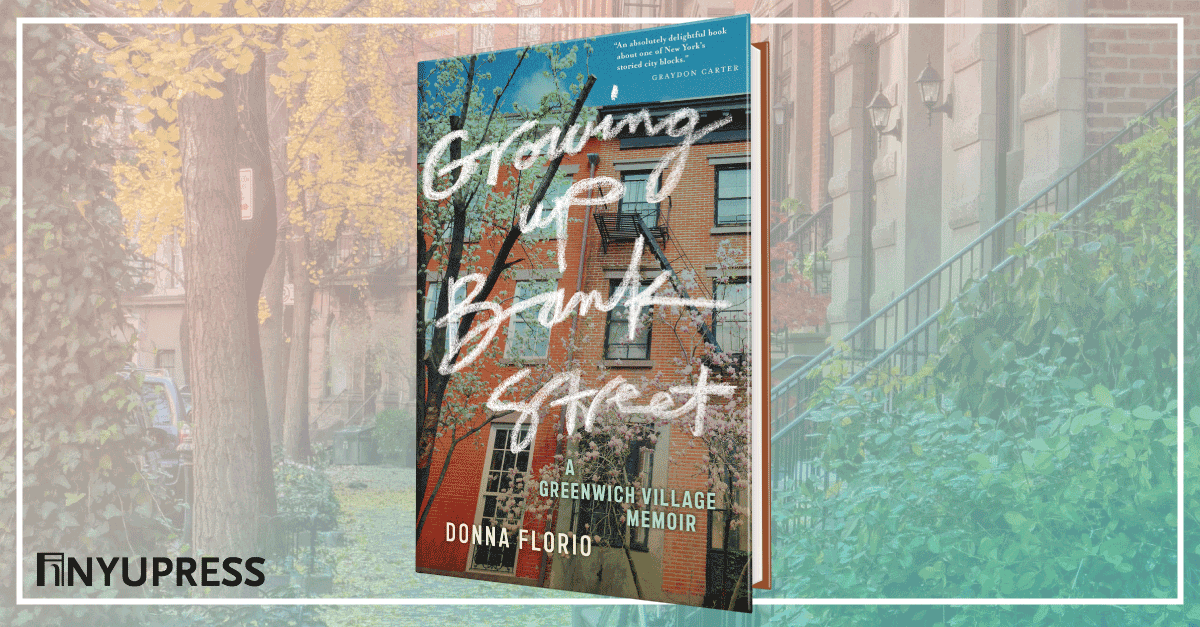 In her new book Growing Up Bank Street: A Greenwich Village Memoir, Donna Florio offers an evocative, tender account of life in Greenwich Village, on a unique street that offered warmth, support, and inspiration to an adventurous and openhearted young girl. To celebrate the book’s release, we spoke with Donna about the experiences she explores in this moving memoir.

What influenced you to write this book about the neighborhood you grew up in and the people who have lived there?

Over the years, a number of influences came into play. To begin with, I have been fascinated by people’s life stories ever since I can remember. As a child, I asked the neighbors, just as I asked my grandparents, to tell me stories from their lives. And since I kept a diary, I would jot down random notes about their answers. Years later, trying to heal after being downtown on 9/11, I started to write about the neighbors as a way to get out of my own head. More and more questions came up. What about Mrs. Swanson, for example, the elderly dancer in 2A who always insisted that the FBI used her apartment to spy on “the biggest communists in America” in the apartment below in the 1940s? I confirmed her assertions with my parents and started to track the story down. Then, it evolved into a treasure hunt. I interviewed the neighbors and got their stories on tape. As I wrote, I realized just how deeply some of these neighbors shaped my life and values. And finally, as I researched their beliefs and actions in historical context, I realized that the stories of these lives, which spanned the American Revolution, the Harlem Renaissance, Prohibition, the invention of broadcast TV, quiz show scandals, and the McCarthy hearings, to name but a few examples, are the stories of America itself.

If there is one thing you hope readers get out of Growing Up Bank Street, what is it?

I want people to look around their own streets and towns and find the magic in the people there. Some of Bank Street’s denizens may tend to be well known or flamboyant, but people are living amazing lives everywhere. Find them and create the family of your heart, wherever you are.

After spending a few years abroad in Thailand, what led you to come back to Bank Street as opposed to other cities or even other places in New York?

I adored SE Asia and would not trade my sojourn there for anything. Travelling is pure joy in and of itself and the world is full of incredible places. But my DNA is in the Village, in the bricks and cobblestones of Bank Street. It is my home like nowhere else on earth.

What, if anything, on Bank Street has been left unchanged since your youth? In what ways does it differ?

Thanks to urban visionaries like Villager Jane Jacobs, the street looks much the same as it did when I was a child.  Sadly, the failure to protect small business owners from impossible rents has destroyed the mom and pop dimestores, fish markets, and grocers that were such a vivid part of everyday life. Buildings that were working factories and warehouses then are residences now so the population has increased dramatically. And the rents are driving artists like my young parents and their neighbors elsewhere. But the good news is that Bank Street keeps getting new generations of vital, enthusiastic young people. Maybe they now need to crowd three or four to an apartment where they might have lived on their own, but they have marvelous dreams to conquer the world of fashion design, socially responsible investing, you name it. My downstairs neighbors, the fabulous young men who came here and started Los Tacos No. 1 are typical. They brought their own brand of fresh energy to the Village and made their own Bank Street.

In your book, you describe Bank Street as a cultural gathering center for artists. What drew these individuals to the Village?

There are many kinds of artists. Some paint or dance but others are social idealists who want to create, not a canvas, but better lives for others. My father fell in love with the Village as an NYU student. He did the beatnik thing; hung out in cafes discussing music and poetry and art. He realized that the Villagers he met were kindred spirits and swore that he would spend his life among them in the performing arts. My mother wanted to do nothing in life except sing. Nothing. Music was her breath. Marion Tanner (Auntie Mame) was a Buddhist to her beating heart. Elevating souls to merge with the divine was all she wanted to do. Bella Abzug was consumed with the need to obtain dignity and equality for disenfranchised groups like gay people and women. I think that kindred spirits are drawn together. It was a given, in my parents’ circle, that creating art was the most perfect way to live one’s life. To Marion, the highest path in life is saving the weak and vulnerable. For Bella, it was bringing equal rights to those whom America had shut out. And I think that these many sorts of artists and idealists who felt these ways, wherever they came from, were drawn here because they were surrounded by their spiritual peers.

You were particularly close to a family that lived two floors above you in 4B. Who were they? In what ways did living in the Village foster relationships such as the one you had with the Frydels?

Ann Florio, petite Italian-American opera soprano and Larry Florio, aspiring director, lived in 2B with their only child, Donna. Annie Frydel, another petite Italian-American opera singer and John Frydel, a tenor, lived in 4B with their only child, Irene. All six of us were at Amato Opera together until Ann and John passed auditions into the Metropolitan Opera chorus. I was accepted in the Met kid’s chorus and stayed there, with my mother and John, until I came of age and left for college. Here, at 63, the Frydel apartment was my second home. Irene is my sister in all but DNA. The Frydels had the same boisterous, open-hearted grand opera life spirit as my parents but they were happy with their accomplishments and their marriage was a lifelong love affair. My parents, by contrast, did not fulfill their artistic dreams and although they stayed in love, their bitterness boiled out at the least opportunity. Life with them was, as Irene put it, “walking on eggshells” for me as a kid. The Frydels were as bohemian and eccentric as my parents but there were no landmines upstairs. The three of them loved me and 4B was my safe haven. No matter what was going on downstairs, I could breathe with them.

The Village was, itself, a safe haven for others. Gay people. People in mixed race marriages. Idealists. Odd, sensitive individuals who could not feel safe either with their blood family or, maybe, in their home town. And when they came here and found kindred spirits they formed emotional clans that held all of the security and commitment of DNA and then some. Biological family is an accident and if you are loved and protected by yours, it is your good luck. Village clans were strictly by affinity, conscious choice and love. Throughout my decades here I have seen and been a member of some of these clans. They surround and defend each other for life with a ferocity and intensity equal to none.

During your research gathering for this project, what was something you learned about Bank Street and its inhabitants that you hadn’t known before?

I learned that Bank Street started in the 1700s as British pirate booty, for starters. A cheeky British Navy cabin boy named Peter Warren demonstrated a talent for sneaking around inlets, locating French and Spanish ships loaded with furs and timbers from the New World. He led his armed shipmates on raids, seized the boats, and sailed them back to Queen Anne in England. The delighted Queen rewarded her little thief with promotions and, eventually, a spread of forest land on the Hudson river (of course neither she nor Warren consulted the Lenape Native Americans who had been here for centuries). Later on, when a penniless British aristocrat fortune hunter came to America and married Warren’s daughter, he sold some lots of his wife’s inheritance to the Bank of New York. The bank built a branch here in the woods to avoid the periodic yellow fever quarantines of the downtown colony. A Bank Streeter named Miss Susannah Whitney, a relative of Paul Revere, worked for the NYC Board of Education in the 1800s and died of “nervous prostration,” (as a former NYC public school educator, I sympathize with her woes).  Down the street, a Broadway actress spied on a physicist who had helped develop the atom bomb and the physicist’s artist wife. The wife, meanwhile, was creating her entire, nationally prominent life story out of thin air. And there was a body hidden in their ceiling. One of the biggest Soviet Russian espionage rings in the country ran merrily along here in a 63 Bank Street apartment even as the FBI watched from their ceiling. No one needs to write fiction on Bank Street.

At the end of your book, you list “the many kinds of friendships” that existed among neighbors in a place like the Village. Why did you decide to end the book in this way?

Operas end with the characters singing about the lessons, ironies, victories, and defeats of their story. Jane Jacobs described the 1950s Village as an ideal mix of socioeconomic levels in her book, “The Death and Life of Great American Cities.”  I knew Jane as my friend Mary’s mother who lived around the corner. In some ways Jane was right. But for all of our tolerance, there were some howling friction points. And although by that point in my book the reader has read about some sweet, amazing Village clan kinsmen of my heart, I wanted to make it clear, albeit in a light-hearted manner, that we weren’t prancing around in Bohemian Paradise either. So I used Jane’s book as my own final act to ruefully point to the places where, idealism be damned, Villagers were also irritating, petty people who behaved badly, got on each other’s nerves, and scrapped it out. It is life, messy and imperfect. And wonderful. 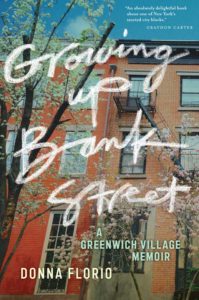 Donna Florio is a lifelong resident of Bank Street in Greenwich Village. Nurtured by colorful, eccentric neighbors who taught her to “never wonder about life from the outside. Jump in!” Donna has, over the years, worked as an opera singer, a TV producer, a Wall Street executive, and an educator, and has backpacked around the world. Her book Growing Up Bank Street: A Greenwich Village Memoir is now available from NYU Press.