Women’s History Month is a time to celebrate the contributions of women to history, society, and culture. For me, it’s also a good time to reflect on connections between the past and present.

This may seem very far afield from women’s history, but I’ve been thinking a lot lately about the hookup scene on college campuses—specifically the ways in which parties facilitate women making out with other women (presumably for the pleasure of male onlookers) and in some cases, threesomes between two women and a man—and how this practice might be tied to history. 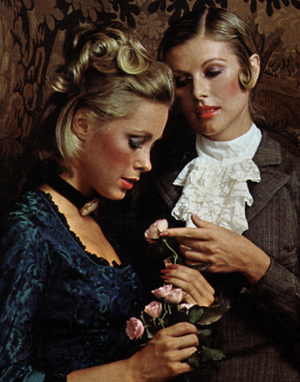 Interviews with queer women students at my campus make clear that these socially approved activities in the hookup culture also provide the opportunity to experiment with or act on already acknowledged same-sex desires. For example, one biracial and bisexual student I interviewed identifies as straight and never thought that she’d ever have a sexual experience with a woman. Then, she said, “[There were] a few times when I was intoxicated and I was at a party where…I just made out with one of my friends on the dance floor.”

Such comments remind me that heteronormative spaces have facilitated love and sexual activity between women in many different times and places. Take, for example, the existence of intimate sexual relationships between co-wives in polygynous households in China and the Middle East, prostitutes in brothels, and women in prison. Romantic friends in heterosexual marriages in the Euro-American world of the 18th and 19th centuries, and the “girlfriends” in avant garde cultural environments (such as Greenwich Village and 1920s Berlin) suggests that bisexual behavior between women, even without the concept of a bisexual or lesbian identity, flourished in a variety of societies. Compulsory heterosexuality and the expectation of marriage and child-rearing meant that women’s same-sex desires and sexual behavior often did not pose a threat to the gender order and sometimes even made for more harmonious heterosexual households by providing sexual pleasure for women.

So when I think about hooking up, I connect it to these historical practices. Who knew Women’s History Month could be so sexy?

Leila J. Rupp is professor of feminist studies and associate dean of the division of social sciences at the University of California, Santa Barbara. She is author of many books, including Sapphistries: A Global History of Love between Women.