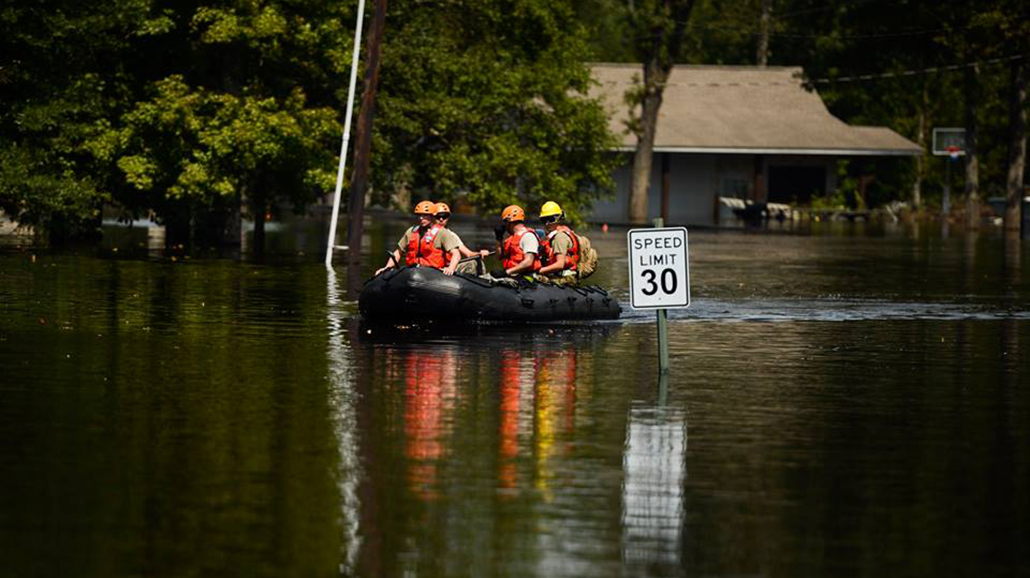 The worst disasters burn images into an enduring collective consciousness. People stranded on rooftops in New Orleans during Katrina. The post-Sandy aerial view of blacked out Lower Manhattan. Migrant Mother in the Dust Bowl.

Hurricane Harvey’s is probably a powerboat.

When streets become rivers, the best motor vehicles are boats. In addition to efforts by city of Houston personnel, courageous residents armed with a boat and a working cell phone with a few social media feeds full of distress calls scoured the aqua avenues. We will probably never know how many lives that they saved.

The worst rainstorm in American history left a staggering toll: 82 dead, as many as half a million cars flooded, $75 billion in property damage, a city, shaken.

In our forthcoming book, we analyze two cities – Houston, and Copenhagen, Denmark – as a lens into urban dynamics for our future. We believe each epitomizes one end of a spectrum of where cities are heading. With its collective-minded focus, dense urban form, and commitment to limiting social inequality, we call Copenhagen a “People City,” a term drawn itself from local decision makers in the city. Houston, at the opposite end of the spectrum, is a “Market City,” a decentralized metropolis dedicated to limited government, sprawl, immense social inequality, and a deep commitment to growing businesses, jobs, and wealth.

Few things throw urban dynamics into relief like disasters. In Market Cities, People Cities, we discuss among other topics, major storms in both Copenhagen and Houston, and how the cities are responding for when the next one comes. In Houston, Harvey was the next one. We are reflecting on it some in the book and in this blog, although it is still early to do so and we proceed carefully.

We believe three Market City elements that we highlighted in the book are relevant to what we are witnessing during and after Hurricane Harvey. First, Market Cities have little in the way of regional governance, a penetrating problem when confronted with storms that do not respect municipal boundaries. We identify more than one hundred different municipalities in the Houston metropolitan area, and nearly two million residents living in Harris County (of which Houston is the central city) who do not live in any municipality. Who your government is during crisis might be a large city, might be a county government, or it might be a tiny enclave carved as a municipality. Second, much of the government’s responsibilities are left to non-governmental actors like non-profits, and the voluntarism and charity of residents. Third, the urban development of Houston – largely unchecked by government and characterized by the concretizing of key greenery that might absorb rising flood waters – means a continuous reconfiguration of risk dependent on dangerously uneven urban form.

It is not very surprising, then, that some of the most effective actors in the midst of Hurricane Harvey were residents who volunteered to ferry their powerboats across meaningless municipal lines and submerged pavement.

These are the folks on whom Market Cities depend. It is not just during hurricanes, either: it is in the afterschool tutoring programs in public schools, in environmental organizations holding polluting facilities to account, and in community organizations pursuing more just policing.

Copenhagen’s approach to disaster mitigation is more centralized. For example, the city is pursuing a twenty-year project aimed at routing downpours into greener infrastructure like soccer fields and carefully designed sidewalks—and out of overwhelmed sewers. This is in response to an immense storm in 2011 that flooded many storekeepers whose business sit a few steps down from the streets above. The collective buy-in for the effort is large. As Morton Kabell, Copenhagen’s Mayor of Technical and Environmental Affairs, told us, few places could propose a project of such length without being overcome by resistance. But Copenhageners are confident in the results, and proceed accordingly.

As we reflect on Harvey and beyond, we believe that the city in which one lives, be it a Market City, a People City, or somewhere in between, will affect resilience to disasters.

Michael Oluf Emerson, Ph.D., is Provost and Professor of Urban Studies at North Park University in Chicago, and a Kinder Fellow at Rice University’s Kinder Institute for Urban Research. He has authored or co-authored 15 books and over 60 journal articles and reports.

Kevin T. Smiley is Assistant Professor of Sociology at the University of Buffalo. Kevin is an environmental and urban sociologist. His research investigates the roots of environmental inequality, particularly disparities across cities.

They are co-authors of Market Cities, People Cities: The Shape of Our Urban Future (NYU Press, 2018).