The Department of Homeland Security’s decision to deploy hundreds of its officers to carry out the largest ever worksite raid in Mississippi, an operation that left children of arrested parents stranded, was a choice made by the Trump administration, not a requirement in the law. The fact that the administration chose to enforce the law in this way, targeting humble workers with families, says everything one needs to know about its priorities.

The Mississippi raid, with its hundreds of human casualties, is a devastating example of what we mean when we say “elections matter.” In my new book BANNED: Immigration Enforcement in the Time of Trump, published by NYU Press, I explain how it all started.

In January 2017, Trump had barely taken office when the White House began issuing executive orders to increase the number of immigrants arrested, detained, and deported. The breadth of these orders was underscored by former Immigration and Customs Enforcement head Tom Homan when he said: “There’s no population off the table . . . If you’re in the country illegally, we’re looking for you.”

Homan’s words, translated into policy, have meant tragedy on the ground. As described by one advocate I spoke to: “Everyone is a priority. It doesn’t matter if you’ve been in the country twenty years and you’ve never committed a crime and you are on your way to Sunday school. You are a priority.”

Prosecutorial discretion is a powerful tool in immigration policy and historically has been used for protecting from deportation those who are undocumented with equities like long term residence, family ties, and employment; conserving government resources; and bringing a modicum of compassion into immigration enforcement.

Today, the concept of prosecutorial discretion is more widely known in light of the Obama Administration’s Deferred Action for Childhood Arrivals or DACA program. But the Trump administration has instead used prosecutorial discretion as a tool for greater immigration enforcement.  The enforcement outlook by DHS has extended to the services arm known as U.S. Citizenship and Immigration Services. As described by one former head of INS or Immigration and Naturalization Services I spoke to: “You see an enforcement look on actions USCIS is taking that would have never happened in INS days. People today can go in for a naturalization interview and come out in handcuffs, subject to deportation.”

Legal immigrants recognized under the immigration statute have also been a target of the current administration. The travel ban, or “Muslim Ban” excludes would-be green card holders and several travelers from Iran, Libya, North Korea, Somalia, Syria, and Yemen. The Supreme Court upheld the third iteration of the travel ban on June 26, 2018 by a 5-4 decision (the first two were blocked by litigation or expired). One attorney I spoke to described the case of an Iranian physician who gave birth to twins but whose parents could not travel to the United States: “To not even be able to hold their grandchildren, not support their kids, who are doctors, it’s hard. It’s really, really hard on the community.”

Immigration enforcement has also targeted the nation’s most vulnerable – asylum seekers, parents, and children. In spring 2018, the administration announced a “zero tolerance” aimed at prosecuting parents for unlawful entry and separating them from their children. Said President Trump: “I hate the children being taken away. The Democrats have to change their law.”

This statement is misleading as there is no statute, regulation, or case law that requires family separation. The administration has also used its discretion to create policies that block asylum for those who arrive in the United States after passing a “third country” and those who arrive in a place other than a port of entry, and that force asylum seekers to wait in Mexico throughout their cases, or be banished from seeking asylum altogether if they passed a “third country” before entering the United States. Asylum is a form of protection recognized in international and domestic law for those who fear persecution in their home countries.

Immigration enforcement in the time of Trump shows that discretion is a powerful tool that can be used to both harm immigrants and protect them. The administration must rethink how it uses discretion and sets priorities. It is essential to the rule of law and humanity. One former government official told me: “The meaning of the law has always included law and equity. .. One without the other is not the rule of law.”

The government has the tools to treat those seeking admission, refuge, or opportunity in the United States humanely, but it needs the will to use them. 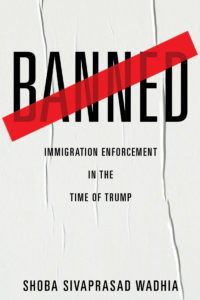 Shoba Sivaprasad Wadhia (@shobawadhia) is an immigration attorney and law professor at Penn State Law in University Park. She is the author of Beyond Deportation: The Role of Prosecutorial Discretion in Immigration Cases (NYU Press 2015), and Banned: Immigration Enforcement In The Time of Trump (NYU Press, 2019) from which this op-ed is adapted.