The death of Hugo Chávez saddens those struggling for a better world. He was a great champion of the impoverished workers and peasants of both Venezuela and the world, and a steadfast and bold critic of the rapacious and murderous imperialism of the United States.

Monthly Review Press is proud of the books we have published on Venezuela, books which describe, analyze, and show solidarity with the Venezuelan road to democratic socialism. A key element in building a revolutionary, new society is to ensure the health of the people. This has been one of Chávez’s singular achievements; millions of poor Venezuelans have received (free) medical care for the first time. In cooperation with Cuba, Venezuela has begun to construct a system of patient-centered, decentralized, and preventive health care, a process examined in Steve Brouwer’s Revolutionary Doctors: How Venezuela and Cuba Are Changing the World’s Conception of Health Care. Remarkably, peasants and workers are themselves trained to be doctors, in a work and study program pioneered by Cuba.

Under Chávez, Venezuela has striven to secure its political and economic independence from the United States, which has had a sordid history of intervention in the country and in all of Latin America. Not only did he help to engineer a strong economy not dependent on the United States, he never hesitated to challenge with words and deeds its imperialist practices. Given the implacable hostility of the United States to Venezuela, examined with great care by Eva Golinger in Bush versus Chávez: Washington’s War on Venezuela, it is remarkable that Chávez remained in power, winning democratic elections and surviving a Bush-engineered coup. This is a testament to the depth of his revolution and the growing power of Latin American governments to steer a course independent of the United States, a power inspired by Venezuela. Following the failed coup in April 2002, when massive popular protest propelled him back to the presidency, Chávez sat down with Marta Harnecker and provided insights into his own political trajectory and the nature of what he called “socialism for the twenty-first century.” His words were later published in Understanding the Venezuelan Revolution (Monthly Review Press, 2005).

While Monthly Review Press must sell books to remain in operation, our main purpose has always been to promote radical thought and action in the world. We have published books in which authors have expressed the deepest admiration for Hugo Chávez, but praise for a radical leader is never our goal; it is the empowerment of the masses of workers and peasants we want to help achieve. And yet, it must be said that our love for Chávez has been amply repaid. 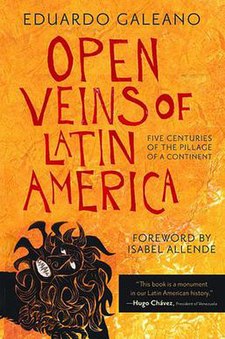 In April 2009, at the Summit of the Americas meeting in Trinidad, Chávez arose from his seat, walked over to Barack Obama and handed him a copy of Eduardo Galeano’s classic work of the centuries-long exploitation of Latin America by the great imperialist nations (including, of course, the United States): Open Veins of Latin America. He inscribed the book, “For Obama, with affection.” As word of this spread around the world, the English edition of the book reached #2 on Amazon’s sales charts. This was a great boon to Monthly Review Press and to our distributor, NYU Press. We were inundated with emails and phone calls, and I remember having to quickly re-read the book (which I had used in my classes when I was a teacher), so that I could write and deliver, within one day, a review to an Australian magazine.

Let us hope that as the Venezuelan revolution continues and as the imperial power of the United States someday diminishes in response to popular revolt here, it won’t be necessary for the president of one country to give such a book to the leader of another. Because Hugo Chávez’s dream and that of every revolutionary person will have been realized… That there be no rich and poor, that there be no exploiter and exploited, that there be only one healthy and happy humanity.

3 thoughts on “In memoriam: Hugo Chávez”